Telluride Gets A Glimpse Into The Mind Of Temple Grandin

Temple Grandin’s accomplishments are well known. Despite being diagnosed with autism at three, she earned a Ph.D. in animal science, holds a professorship at Colorado State University, authored multiple books and speaks about autism around the world. She is the subject of an Emmy Award-winning movie based on her life, aptly titled Temple Grandin, and she was named one of Time magazine’s 100 most influential people in 2010. 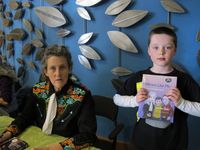 Yet, as I learned Monday night after hearing her speak in front of a packed house at the Palm Theater, if that is all you know about her, you’ve missed the best. You’ve missed her straightforwardness, her practical advice, her jokes, her determined energy and her no nonsense approach to working with autistic children. Essentially, you’ve missed her.

Grandin could have easily gone through life with her complicated genius untapped. But she was diagnosed early, benefited from intervention and had a few key people who believed in her throughout her life. She attributes her success, and her character, to growing up in the '50s and the rich opportunities to gain hands-on skills. She worked on her aunt’s ranch and had an embroidery job a few days a week when she was a teenager. If you’ve seen her, you’ll notice that the shoulders of her shirts are covered in colorful embroidered patterns that she hand-stitched.

These hands-on experiences gave her the space to learn how to solve practical problems, a space she continually emphasizes as invaluable for autistic children. “What are these kids going to do when they grow up?” she asks. “Where is wood shop? Where is auto mechanics?”

Among autism experts, Grandin is credited in the field for opening a window into the autistic mind. She explains the sensitivity to loud noises, fluorescent lights or rough spots on clothing. Autistic kids have trouble reading social cues and understanding feelings. Through an image of two brain scans, she shows differences in her brain and normal brains.  Autistic brains are attracted to objects, whereas normal brains are attracted to people.

“Who do you think invented the spear during the Stone Age?” she asks, then answers, “It was an autistic caveman; all of the others were outside socializing by the fire.” But in seriousness, because she doesn’t readily relate to people, her work is more than her career; it gives her shared interests that allow her to connect socially. Thus her plug to teach autistic kids work skills.

She jokes about being a geek, and warns, “Don’t de-geek the geek” – meaning, “Let me be myself.” And this is another of her central messages: Allow autistic kids to flourish in their autistic selves, but keep them accountable. She advises: Find something these kids are good at, and let them be good at it. Give them channels to identify and develop their strengths. “People respect ability,” she says, “I sold people on my ability, not my autism.”

Grandin explains that her mind works like Google maps so in order for her to understand, you must give her specific examples. She is refreshingly direct in expressing her needs and refreshingly unapologetic for having them. So as soon as the first audience member asks a question using padded, vague language, Grandin’s interruption is almost scripted.

“I don’t understand ‘my son’s challenging behavior’”, she says. “Tell me what he does.”

The mom redirects her nomenclature and gives specific examples of what her son does and says when he is having an outburst.

“Change the emotion,” Grandin tells her. “It’s hard to control emotion, so you have to switch it.” She had to switch her anger to sadness and she explains that she learned to cry instead of lashing out.

“I’d rather have my son cry than be angry,” the mom softly replies.

Some in the audience were parents of autistic kids looking for answers, or teachers wanting to learn more. Others came because they’d heard of Grandin’s work with animals, seen the HBO movie or read one of her books. The takeaways may be different for different people — but no one will forget her.