TIO On The Road: Visit To Shannon Yachts

You can get to Telluride from Bristol, RI, and vice versa.

Telluride Inside… and Out has been East for nearly a month, mostly with Susan's parents in Hackensack, NJ. Among the side trips while we've been here, we were recently in Great Barrington, MA with Susan's aunt and cousin, then on to Providence, RI to share some time with new friends, the Pavlides family. Three year old Odysseas is one of my favorite people in the world, and I thought he would be interested in seeing how sailboats are built.

Hence our visit to Shannon Yachts in Bristol, RI, just a half hour down the road from Providence.

How does Telluride fit into this picture? Well, it's like this:

In November, 1981, my dream boat, Aeolus, a Shannon 28, slipped her lines, and I, totally inexperienced as an offshore sailor, set off for the world. We had a rough early winter passage to Norfolk, VA, but Aeolus and I survived the journey. That Fall we navigated the now-closed Dismal Swamp Canal, had Thanksgiving with new friends in Beaufort, NC, laid over in St. Augustine, sailed with my teen-aged daughters to Key Largo, FL and spent the winter in the Florida Keys.

Subsequent years found Aeolus and me in the Chesapeake, all over the Caribbean, and back to Aeolus' home waters of Narragansett Bay. And therein lies the tale. My airline career provided me with the flexiblity to live this vagabond existance, but it required some planning. When I left St. Barth's in May of 1985, my plan was to use my long Fall vacation to move the boat back down to the islands, but while I was on an airline trip to Asia, Hurricane Gloria made a direct hit on Newport Harbor, Aeolus' mooring drug, and my beautiful boat was badly damaged against the hull of a big steel boat.

Walter Schultz, head of Shannon Yachts, argued the insurance company out of totaling Aeolus, and sent a crew down to Newport to bring the little ocean-going boat back to Shannon for the major repairs (under her own power, I must add).

My vacation plans in shambles, I packed up my motorcycle, in the garage of a friend in Denver, and headed for the Utah Canyonlands, by way of Aspen. I overnighted in Telluride. Next week, that "overnight" will have stretched to 26 years.

The wizards at Shannon Yachts rebuilt Aeolus to better-than-new condition over the winter, and she went back into the water at Tiverton, RI in May of 1986. I divided my time over the summer among work, living in Telluride and sailing the waters around Newport.

In the Fall, I brought Aeolus back to Annapolis, wintered there, enjoyed another Summer in the Chesapeake, before returning to the Caribbean in Autumn, 1987, weathering Aeolus' third hurricane en route to the Bahamas.

When Susan and I met in February, 1989, Aeolus was anchored in St Lucia. We quickly decided to marry and that necessitated sailing back north. In gaps in my work schedule and time for our new romance, I made time to sail up to St. Maartin. In June we both went down to the islands for a few days, then sailed to Bermuda to get married. We both went back to Bermuda for a relaxed weekend in early July, then Susan returned to NYC to work, and I soloed Aeolus to Newport. Sus was transfered to Stamford, CT that Fall, which gave us an excuse to relocate Aeolus to Long Island Sound. On nice days I would get on a midmorning train to Stamford, meet Susan at the boat to sail on the Sound over her lunch hour. She didn't always get back on time.

In May, 1991, Susan hung up her Paul Stuart power suits and moved full time to Telluride with me. Neither of us had spent much time there during our first two years together while she was still at City Bank. With us out of New York, Aeolus didn't see much action and we eventually sold her. An era had passed. 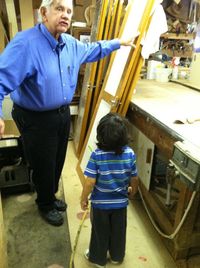 Fast forward to a few days ago. With plans to be in Providence, I got in touch with Shannon: Walter Schultz and Bill Ramos were in Annapolis for the North American Sailboat show, but Don DeFano, one of the people in the company with whom I had had the most contact, would be happy to come out on a Saturday and show us around. Old home week. Don told me that I had been a favorite owner (well, not an owner- the word around Bristol was always that these remained Walt Schultz's boats; we just got to pay a lot of money to get to use them) because Aeolus had been been lovingly used to sail the waters of the East Coast and the Caribbean.

And then he took us out into the shops and the yard to see how Shannons are built, and finally up to actually set foot on a Shannon 53 HPS, which made young Odysseas' day. He was standing at the helm in the inside steering station, hands spinning the wheel. I asked him if he was ready to set sail. His answer? "Let's set sail!"

And I had come full circle.

Clint is TIO’s Publisher and a staff writer. Clint first arrived in town in 1985 just to check out the views, spent most of his life as “CEO” of a giant business, a 747-400 airplane in the Northwest fleet. Since his retirement in 1998, Clint has taught for the Telluride Adaptive Sports Program.