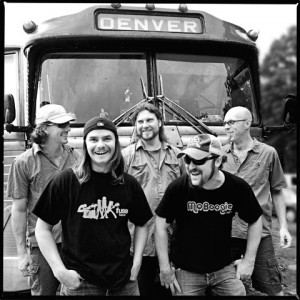 They are a progressive bluegrass quintet from Denver, Colorado with deep Appalachian roots and a genre-bending sound that fuses traditional bluegrass with indie rock and a citybilly swagger. On their Facebook page, the group calls its sound “Rocky Mountain Guerrilla Grass.”

Oakhurst has played legendary venues like the Fillmore and Red Rocks. Now they are in town to jam at The Llama. The no-miss event takes place tomorrow night, Friday, January 27, starting at 10:30 pm.

A word of caution: Plan on bringing an extra pair of shoes because you’re going to dance your first pair to pieces to Oakhurst’s kamikaze rhythms. And no one likes walking home barefoot this time of year. Could be cold. And slippery.

Bluegrass music – and its progeny – is supposed to make us want to stomp our feet, smack our hands together, and dance. Oakhurst more than delivers. How do they pull that off? Well…

Start by combining the dynamic voice of lead singer and flat-top guitarist A.P. Hill with a mandolin by C. Max Paley, whose sound flows like a river after a snow melt. Add the subtle bass of Johnny James Qualley and the slide guitar and vocals of Daniel Lawrence Walker, and then finish it off with Chris Budin’s truly groovy drumming. That’s Oakhurst. Almost. Any thumbnail sketch falls short. It is kind of like cutting up a mountain to figure out why it looks so pretty. The magic is in how the group fits together as a whole.

In 2007, Oakhurst won Westword’s award for “Best Bluegrass Band.” What’s more interesting, however, is the fact they were nominated for four straight years in five different categories. The band with the hard-to-put-in-a-box-and-tie up-with-a-bow sound can be as classic as a Tom Petty tune (with their hit “Grass is Greener”) or they can riff as hard as Béla Fleck (see: “Kooky-Eyed Fox”). Oakhurst is in demand and has played alongside groups as diverse as Yonder Mountain String Band and The Flaming Lips. Along the way, the group found their own unique voice, one with no boundaries, no limits: they can make you mourn an old love one moment and the next, you’ll be screaming “Shake your ass for rain!” at the top of your lungs.  (Listen to “Brigade”. Promise, you will yell.)

Mostly what we get from Oakhurst is a kind of purity: the group never puts on airs. They don’t pretend to be anything they are not. They just play from the heart. No matter what Oakhurst does, it feels genuine. And that’s a rare and very good thing.

For a preview, watch the video.