Greg Stump’s long-awaited final cut of “Legend of Aahhh’s,” to premiere in town 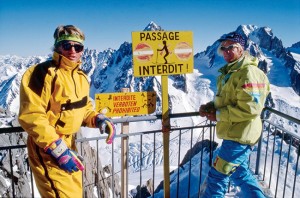 We’re going to unveil some really good stuff, including the Winter Olympic Visa commercials; three different beer commercials and an MTV video featuring Roudy Roudebush as a pilot, plus a cameo from Ruby the mountain lion,” said Rolley.   Footage featured in “Super Cut,” include a spattering of Warren Miller classics; “Scrapple,” a fictional story set in Telluride; and Greg Stump’s “The Good, The Rad, and The Gnarly;” “Maltese Flamingo;” and “Blizzard of Aahhh’s.” Rolley, who boasts an impressive library of his own, received additional gems from the archives of Scott Ransom and Tim Territo.   Kennett, famous for skiing in films alongside his dog Zudnick, and Stump, who helped put the ski resort on the map, will be in attendance to introduce segments.  The following night, Greg Stump unveils his long-awaited, semi-autobiographical “Legend of Aahhh’s.”   The New York Times has described Stump as “a maverick film maker in the ski business.”  And Premiere Magazine said: “To watch Stump epics is to stand on the edge.”

Stump is widely credited for moving ski films from the documentary genre and into the action film genre. He is best known for his 1988 flick, “Blizzard of Aahhh’s,” which prominently features Telluride and was voted “Number One Ski Film of All Time,” by the Ski Channel and Skiing Magazine.    “Blizzard of Aahhh’s” started it all!” said Travis Julia. “It was not only the first glimpse of extreme skiing, but a window into the future of skiing movies.”   Twenty-five years after his breakthrough film, Stump returns to his favorite stomping grounds to explore the history of ski film, from Leni Riefenstahl’s first ski movie in the 1930’s through to today’s sponsor-drenched, high-definition thrillers, and documents the influence the genre has had on big-mountain skiing, pop culture, and the birth of the extreme sports movement.   With interviews from Warren Miller, Dick Barrymore, Otto Lang, John Jay and Klaus Obermeyer, paired with ski turns from Scot Schmidt, Glen Plake, Mike Hattrup, Lynne Wieland, and others, Stump’s latest project promises to shed new light on the evolution of skiing and ski film production. And with a soundtrack from Lukas Nelson and “Promise of the Real”—that’s Willie Nelson’s 22 year-old prodigal son and his ripping band— “Fort Knox Five,” and “Bran Van 3000,” “Legend” is in a class of its own.  Shows are general admission, and all ages are welcome.

Tickets are $15/per night. Proceeds from the two evenings benefit the Sheridan Arts Foundation and Telluride Historical Museum. Tickets can be purchased online at sheridanoperahouse.com or by calling the Sheridan Opera House box office at 970.728.6363 x5.