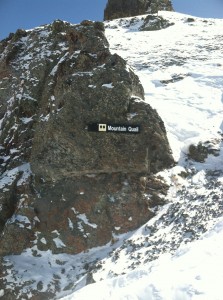 My mom often complains that I never ski with her. For the record, I ski with her every year on her birthday, when my sister and brother visit and often with my five-year old daughter. But, she is right; exclusive ski dates are rare.

So, last Sunday, I called her to go skiing. It was a beautiful sunny day, the snow had been excellent all week and all of the hike-to terrain was open. Little did she know, I had an agenda. I was going to get Amah (the name her grandchildren call her and the rest of us have adopted as well) on Mountain Quail.

In my mind, Mountain Quail is the most user-friendly of the Black Iron Bowl hike-to runs. Relative to the other stuff, it has a fairly mellow pitch; it’s pretty wide; and there aren’t a lot of obstacles like rocks or cliffs. The only caveat is it requires the longest hike; it’s the last of the runs along the ridge and is right before the ascent for Palmyra Peak. But, I was convinced Amah could do it.

I met Amah at the base of the Gondola with my backpack on. She may have been thinking I brought a European picnic lunch with salami, bread and wine, which would have been a nice thought, but unfortunately that was not the pack’s intended use for the day.

Now Amah is no slouch on skis. She taught ski school at some point in her life, and is usually ahead of my sorry ass in the lift line on a given powder day. She has lived in Telluride for over 30-years and says things like “they’re calling for six to seven,” “it’s blower,” and “I’m skiing on my fat boards”.

But, she’s not the type who skis the hike-to terrain on her own, or at all really. Revie Bowl, Little Rose, Mammoth and Log Pile (the run everyone under 10 and over 60 loves) are in her comfort zone. I can’t publish her exact age because then she’ll never baby sit for me again, or at least she’ll threaten not to, but let’s just put her somewhere between 60 and 70.

And, she was going up Mountain Quail. 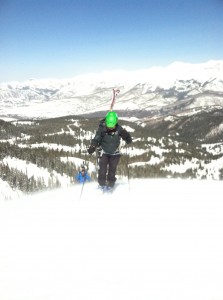 We made our way to Prospect Lift, got off and took off our skis. I strapped her skis on the pack, helped her into it, tightened the waist belt and pointed the way.  We began the hike one foot in front of the other. I estimated the hike to Mountain Quail would take about 20 minutes.

We made it past the first runs on the ridge, also known as the ex-girlfriends, Crystal, La Rosa and Genevieve, then began the first steep ascent to West Lake. Amah stopped and asked if I had water. I should have had water in that pack, along with the European lunch, but I didn’t. I suggest if you bring your mother, the grandmother of your children, up Black Iron Bowl, throw some water in the pack; I will next time.

Instead, we caught our breath without water. Amah looked to the end of the ridge, to our destination, then down West Lake, directly below where we were standing. “What’s wrong with this?” she asked. There was nothing wrong with West Lake, except that it wasn’t Mountain Quail. I kept walking and she followed.

We began the second steep ascent along the ridge, a section in which the boot pack forms a series of steps straight up. She kept charging, putting one foot in front of the other. The wind rose, blowing snow across the ridge, momentarily disguising the terrain and making Amah look like a mountaineer attempting a summit in the Himalayas.  She marched — head down, her skis peering up from behind her.

We reached the final ridge and made it to the saddle of Mountain Quail in the shadow of Palmyra Peak.

I knew Amah could ski Mountain Quail without a problem, but I had forgotten that the top is a cornice, which makes the first turn a little intimidating. Amah moved back and forth on the ridge, looking nervously at the initial drop. I tried to convince her it was fine; it was just the first move that she had to commit to, and then there’d be no problems. She wasn’t convinced.

“Hmm,” I thought. “Am I going have to throw Amah from Mountain Quail?”

She kept looking for a place to enter, then finally said, “What if I go up there?” pointing to the very top of the saddle along the base of a rock band. It looked like a great entry, with no drop. She hiked up to the rocks, followed the base of the band, and in no time was skiing Mountain Quail.

Amah on Mountain Quail is what skiing is all about. Now, I just need to get her on Mak’m.

Snow Sunday is a weekly column by Jesse James McTigue and sponsored by Jagged Edge intended to deliver tips, news, musings and stories about the people, places, events and experiences that make the Telluride winter an epic adventure.

Jesse James McTigue moved to Telluride when she was eleven. She has left many times –to attend a ski academy and college on the East Coast, to travel in South America, and to teach middle school in Oakland, CA –but she always seems to return. She returned (again) in 2008, married with kids, and thinks this time it may be for real. When she’s not chasing her kids, she’s searching for sanity on her skis or bike and makes her living freelance writing, grant writing and tutoring.