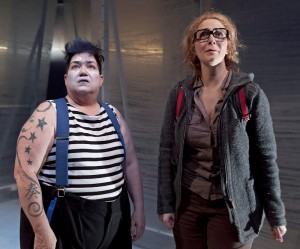 Spring is a busy time for the Telluride Playwrights Festival. While everyone is getting their last minute snow licks in, we are down to reading the final selections for our sixth annual season at the historic Sheridan Opera House, July 9 – 15.

The Festival has been growing at a steady pace since Sparky Productions got it off the ground. Sparky is a local non-profit whose mission is to bring all sorts of quality entertainment to town.

We had a hand in helping local filmmakers George and Beth Gage, whose latest documentary about Tim De Christopher, “Bidder 70,” opens at Mountainfilm in Telluride over Memorial Day weekend.

In January, the ‘indie’ band “He’s My Brother, She’s My Sister” came at our invitation to the Sheridan Opera House for a musical evening of jam-packed tap-dancing rock and roll.

Now we’re gearing up for the next project.

Over the last six months, the Telluride Playwrights Festival read over 250 plays sent from all over country. It is clear the word is out in the theatre world and playwrights want to come to our box canyon to hear what we think of their new work. Our staged readings featuring professional actors are the start of a unique process that sometimes takes years to come to fruition on the boards. Feed-back at these events is a crucial element in helping to shape a play, as was the case with Jan Buttram’s “Phantom Killer.”  Its surprise ending, the one audiences saw when the play was produced at New York’s Abingdon Theatre, was sparked by a comment made by an audience member at the Sheridan Opera House.

Other theatrical seeds like “Phantom Killer” sown here are now blooming all over the country – with Telluride’s name attached to the good news. This year alone three plays that got jump-started in our town are scheduled to be produced by large companies.

The Detroit Rep will do James McLindon’s “Dead and Buried.” The Chicago Blues Theatre will produce James Still’s “Love Me Some Amnesia” in the fall. And the first play to hit the big time is coming up this month Off- Broadway. Produced by Alfred R. Kahn in association with the Culture Project, it is Drew Larimore’s  “Out of Iceland.” (Larimore, a talented, young playwright, was one of the first talents to be invited to our Festival. )

Five years ago, “Out of Iceland” was called “Out of Askja.” Although the name changed for the New York production, one member of the original Telluride cast, Jillian Crane, will re-create the role of Caroline Miller, “a New York writer who falls off an Icelandic volcano and awakes on the couch of a complete stranger.”

Crane, a gifted writer as well as actor, also sits on the Playwrights Festival’s advisory board, along with award-winning actor and part-time local Laura Linney, and award-winning screenwriter, playwright and director Christopher Hampton. (Linney and Hampton are regulars at the world-renowned Telluride Film Festival.)

So if you happen to be in New York during its run, please pencil “Out of Iceland” into your schedule. When you see it, go back-stage and say hi to Jillian and Drew and be sure to tell them how great it is to see a play that was Made in Telluride. After all, they are family now.

Performances for “Out of Iceland” will be in April on Monday and Wednesday through Saturday evenings at 8 p.m., Sunday evenings at 7 p.m. Walkerspace is located at 46 Walker Street, between Broadway and Church. Tickets for all seats for all performances are $35 and may be purchased at www.outoficeland.com or by calling 866-811-4111.