Vincent and Anne Mai (along with filmmaker/pianist Josh Aronson) produce the extraordinary Telluride Musicfest, an event that occurs annually in Telluride in June – this year, starting June 27, marks the 10th anniversary –  to celebrate chamber music in its intended form: top tier musicians performing the sounds of Beethoven, Brahms, Mozart, Mendelssohn & friends in an intimate home environment.

When the couple invited us to join their table at The Juilliard School’s annual fundraising gala, naturally I expected more of the same at the concert: the sounds of dead white men performed with boundless expressive freedom, passion, and transparency.

Glorious sounds. Check. Bravura technique. Check. Dead white men? One formidable ghost maybe, but otherwise, no. Monday night (April 30) at Juilliard, the spotlight was on a woman, who is very much alive and kicking: Mary Rogers Guettel, chairman of Juilliard’s board, 1994 – 2001. The evening’s entertainment unfolded from her music and words – with a little help from her friends.

“She had a playfulness and an accessibility, and as a person of the stage, she could really respect the hard work of these young artists—and revel in it—and her enthusiasm was infectious,” said Joseph W. Polisi, Juilliard’s president, quoted in an article in “The Juilliard Journal online.”

After her first big success, the 1959 musical  “Once Upon A Mattress,” Guettel became – and here I am quoting her from a 2001 Juilliard commencement address – “Mary Rogers-the-daughter-of-composer-Richard Rogers who is ‘a composer in her own right.’ Adding:”Can somebody tell me what the hell that means? Who else’s own right would I be a composer in?”

“Juilliard has become—is—my self-respect, my pride… my life. … Aside from my family, you have made my life more meaningful than I ever dreamed it could be.” ( Quoted from the same online Juilliard article.)

The gala tribute began, of course, with a Telluride connection: when the curtain went up, out sauntered none other than the lovely Laura Linney, a part-time local.

The award-winning actress of stage, screen and TV is a Juilliard alum, who now serves on the board. And she is a FOM (Friend of Mary). Linney first  the met the lady at age seven, when Linney’s mom was nurse to a failing Richard Rogers. Faced with the shy little girl, Guettel, Linney proclaimed, “made me feel safe, solid and excited.”

“Hail Mary,” Linney proclaimed. And the talent that followed did.

Guettel’s rapport with young people like Linney became central to her career, which includes funny young adult books such as “Freaky Friday and “A Billion for Boris,” songs such as the 1970s “Free to Be….You and Me” and the theme song for “Captain Kangeroo.” She also worked for 13 years as writing assistant for Leonard Bernstein on his legendary Young People’s Concert series. Enter Jamie Bernstein, who also has a Telluride regional connection through her long-time association with the Moab Music Festival (now affiliated with Telluride Musicfest).

Like Linney, Bernstein met Guettel as a child. (And like Guettel, she is the daughter of a giant celebrity.) Jamie described her role model as a woman with an “antic personality” and an unforgettable “gravelly voice,” who was “always pregnant.” (Guettel produced five offspring.)

A 10-year-old Juilliard violin prodigy, Elli Choi from the pre-college program closed the festivities with her solo of “Carmen Fantasy for Violin and Orchestra, op. 25) The subtlety and pyrotechnics of her performance brought the packed house to its feet. The next Midori? Perhaps. Our next move? Dinner and dancing under a tent set up for the event across the street from the school at Lincoln Center.

I felt like Cinderella at the ball. But still, I would have traded my brand new Michael Kors heels for her glass slippers in a New York minute. My heart was full. But my feet, out of practice wearing spikes, ached like mad but all for a great cause. Turns out 93 percent of the Juilliard’s student body is on scholarship. 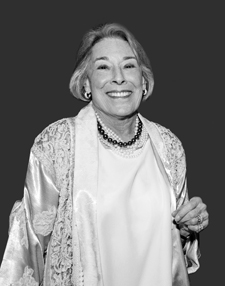