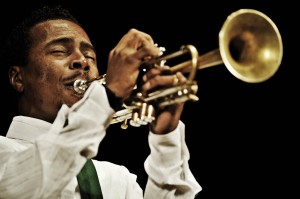 At 43 years young, the former prodigy is widely considered one of the best trumpet players in the world. Since his emergence in the late 1980s, acclaimed trumpeter, composer, and bandleader Roy Hargrove has firmly established himself as one of this generation’s premier performers in jazz and beyond.

An adventurous and wide-ranging artist, Hargrove continually strikes out for new terrain. His groups include the straight-ahead, hard-bop Roy Hargrove Quintet and Crisol, an Afro-Cuban ensemble that won a Grammy in 1998 for Best Latin Jazz Performance with its album Habana. With the funk-oriented RH Factor, Hargrove released the 2003 album Hard Groove, featuring guest appearances by R&B superstars Erykah Badu, Common and D’Angelo. Hargrove’s Earfood (Groovin’ High/Emercy), was featured in dozens of year-end Top 10 lists in 2008.

Fast forward to the present, Hargrove realizes a lifelong dream with the summer release of Emergence (Groovin’ High/Emarcy), his first big band album. Nineteen pieces strong, Hargrove’s ensemble is a vibrant and versatile group, tackling a wide range of material and styles with equal doses of precision and passion.

“Financially speaking, this is probably the worst thing I could ever do,” says Hargrove, “but it is something that needs to be done, spiritually and musically speaking.”

Roy Hargrove stands side by side with one of the best bass players in the world, Victor Wooten, also a prodigy, and many other musical greats at the 36th annual Telluride Jazz Celebration, where he is Guest of Honor and featured with his quintet.

Hargrove was born in Waco, TX in October 1969. Inspired by the gospel music he heard in church on Sundays and the R&B and funk sounds played on the radio, he began learning the trumpet in the fourth grade. By junior high school, Hargrove was playing at an advanced level of proficiency. At 16, he was studying music at Dallas’s prestigious Booker T. Washington School for the Visual and Performing Arts.

Midway through his junior year, Roy was “discovered” by Wynton Marsalis, who was conducting a jazz clinic at the school. Impressed, Marsalis invited Hargrove to sit in with his band at Ft. Worth’s Caravan of Dreams Performing Arts Center. Subsequently, the young musician was able to return to the venue over a period of the  months, sitting in with Dizzy Gillespie, Herbie Hancock, Freddie Hubbard and Bobby Hutcherson. Word of Hargrove’s talent reached the ears of Paul Ackett, founder and Director of The North Sea Jazz Festival. Ackett arranged for him to perform there that summer. The gig led to a month-long European Tour.

Hargrove’s first recording in The Big Apple was with the saxophonist Bobby Watson. A session with the up-and-comers super group, Superblue featuring Watson, Mulgrew Miller and Kenny Washington followed. In 1990, Hargrove released his solo debut, Diamond In The Rough, on the Novus/RCA label, for which he would record a total of four albums that document his growth as a “young lion” to watch.

For a preview of what’s in store at Telluride Jazz, watch the following video, which features Hargrove’s quintet at a gig in April 2012: