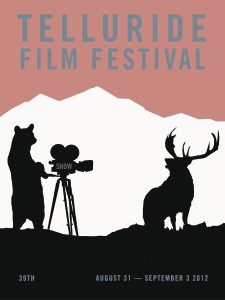 No, I have not let the cat out of the bag. Those are not the names of dark classics to be screened at the 39th annual Telluride Film Festival in some send-up of Hollywood’s bloodlust.. Truth is, Telluride Inside… and Out releases our live interviews with co-director Gary Meyer on this year’s features, documentaries, tributes and special programs the minute the embargo is lifted: Thursday, August 30, noon. So stay tuned….

The above is a partial list of films scheduled to be screened at Telluride’s five-star Wilkinson Public Library, when the film club, Cinematheque, reopens for the fall/winter season on October 1.

Cinematheque is a joint venture between the Library, which provides the venue and does the marketing, and the Telluride Film Festival, which provides the programming. The programming generally falls to Meyer, but for the fall/winter series, The Undead, is largely the work of TFF staffer in charge of community outreach and education initiatives, Erika Gordon – with a little help from friend and mentor, Meyer.

Cinematheque is FREE to all and just one of the many ways Film Fest thanks the Telluride community for its support.

How else does the Telluride Film Festival give back to its host community?

For one thing, the event makes our home greener. And I do not mean the scenery. I am talking about money in the bank.

The Telluride Film Festival is an economic engine for the Telluride region. Despite its relatively small crowd size, just over 2,000 attendees, the TFF brings in more sales tax revenue to both towns, Telluride and Mountain Village, than any other single event – and it does that with minimal impact. Plus, the TFF pumps over $1 million into the local economy in staff salaries, lodging, food and other expenses.

The Telluride Film Festival enhances the Telluride brand. Film Fest has developed a worldwide reputation resulting in hundreds of articles across the country and beyond every year.

Film Fest creates numerous opportunities for nonpassholders to attend the SHOW for free (though generally on a first-come, first-served basis). The short list includes six nights of free films at the Abel Gance Open Air Cinema in Elks Park, 12 different programs at the Backlot (the Wilkinson Public Library, again), seminars and conversations.

(Go to hospitality, Brigadoon, located at Gondola Plaza or the TFF website for further details.)

And that’s not all. The TFF backs or provides the following community activities:

• Makes Film Festival passes available to residents at a 15% discount;

• Produces the After-the-Film-Festival program which affords community members the opportunity to see six of the Festival program films at the Palm Theatre for reduced prices.

• Provides two or more scholarships to allow local students to participate in the TFF’s Student Symposium or City Lights programs;

• Outfitted the Palm Theatre with state of the art 35mm projection and sound equipment that was donated to the School District and is available for yearlong use by the community.

• Programs and produces, in cooperation with the Telluride schools and the Telluride Foundation, a series of monthly free films called “Sunday at the Palm,” at The Palm Theatre throughout the school year;

• Has provided thousands of videos and books on film to the “Malcolm Goldie Collection” at the Wilkinson Public Library;

• Works with Telluride TV to provide many hours of free programming of TFF events from over the years;

The men (and women) in black all wear white hats.