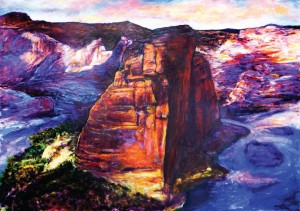 When you head out on Telluride Arts’ walk about town, the First Thursday Art Walk, Thursday, September 6, plan to hang out at two art venues run by the region’s grassroots arts organization, the Stronghouse Studios + Gallery and Gallery 81435, to enjoy the work of fine and very different artists: Elaine Fischer and Scott Rhea respectively.

Elaine Fischer arrived in town in the 1980s. Fast forward nearly 30 years, Elaine is  a high profile and highly respected member of the community known mostly for her government and nonprofit work: HARC, town council, mayor, and today,  county commissioner. In 2007,  however, Elaine decided to return to her roots in fine art and start painting again – and it was a long time coming.

Elaine created her first opus magnum in kindergarten. (The teacher hung it front of the class room  for weeks.) In elementary school, she was chosen for a special art program at the Carnegie Institute, one of only 300 Pittsburgh kids chosen to study theory and technique. Elaine attended the course from age 9 – 17, graduating high school with a rock solid background in ceramics and painting. At Rhode Island School of Design, Elaine learned to sculpt. Sculpting lead to a deeper interest in painting – and no wonder: Elaine is the niece of world renowned painter Philip Pearlstein whose tactile nudes appear to have been sculpted with paint.

Her new body of landscapes, Confluence, brings together line, marks, forms, and colors seen in previous works, which combine to create images at the nexus of abstract and representational painting. An opening reception for the artist takes place 5-8 p.m. 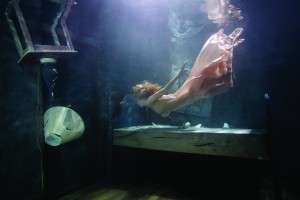 Scott Rhea, has worked in Europe and the U.S. but divides his time at home between Tinseltown and the Ski Ranches (just outside the Town of Telluride), has had a very successful career as a commercial photographer triggered by early aspirations to design clothes. He wound up shooting print and editorial fashion instead.

But his collection of ethereal, magical fine art photography of unique underwater images was created in response to Katrina (Rhea hails from New Orleans). That series, “An Inevitable Consequence,”  explore themes of cause and effect are beguiling examples of Magic Realism: strange circumstances and juxtapositions infuse the ordinary with a sense of mystery that both beckons and threatens the viewer.

Here’s what Scott has to say about his mesmerizing signature works:

“Preservation of the original state that conceived  this work remained key in bringing the images to life. After Hurricane Katrina, I began waking in the middle of the night and journaling the storybook like visuals, which were oppressively beautiful in ways, yet serene and hopeful. Everyone knew it was inevitable New Orleans would eventually suffer this fate so the idea of visually exploring cause and effect, actions and consequence, gave way to the common theme of this collection.

The weightless environment of the underwater world and behavior of light in water set a stage for creating a world that cannot be replicated above ground. Collaboration of the many talented people, the bravery of the talent, and common belief in the idea that something magical was going to happen were all components that made for the perfect alignment of events for a project like this to be created.”

Other important stops at Art Walk include the Ah Haa School for the Arts, where the works of Allyn Hart and Jerry Oyama are featured in the Daniel Tucker Gallery. Allyn will show work from three recent series: monoprints using Xerox transfers; alphabet inspired watercolor and ink drawings; water themed photographs. Jerry will show ceramic sculptures from his “powers of ten” series and paintings from this summer. Internationally acclaimed artist and Ah Haa boardmember Robert Weatherford  encouraged the recent madness.

In Ah Haa’s East Gallery, enjoy photographs of swinging London by Michael Ward, renowned for having an uncanny eye for news and social commentary. The exhibition features over 40 of Ward’s most famous photographs. Subjects include famous actors, writers, painters and politicians, as well as rarely seen pictures of The Beatles, Rolling Stones and Queen Elizabeth. This summer marks the first time Ward’s work has been exhibited in the United States since he passed away in April 2011.

Lustre, an Artisan Gallery, features the 24k gold and silver jewelry collections of Gurhan at a trunk show. The metal artist’s designs are driven by the dictates of the pure metal: every piece must achieve strength, lightness and affordability, as well as beauty in its design, but it is the warmth and sensuality of pure gold that remains at the soul of Gurhan’s work. Every detail counts: The graceful curve of the clasp. The texture of metal wrought by hand. The supple flow of chain. The tiny, almost hidden signature tag. 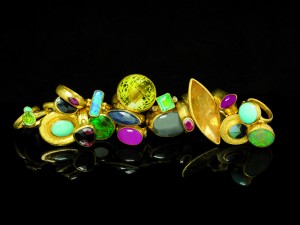 “First I dream the woman, then I dream the jewelry. And when I talk about a “woman”, I’m not talking only about a beautiful model, I’m talking about every woman…my mother, my neighbor, my wife, my friends…my customers. Fate brings a woman and my jewelry together.”

The Telluride Historical Museum presents “Sight and Sound: 125 Years of Art and Music In Telluride.” As part of the show, filmmaker Suzan Beraza presents the trailer of her latest documentary film, “Uranium Drive-In,” stills from the movie, history of her production company and provocative thoughts on the film. (Beraza’s work will be featured as part of the arts exhibit throughout September.)

Tweed features the pottery of Desiree Rothschild, whose bright floral shapes, intricate designs and patterns were clearly inspired by Mother Nature. In addition to their handmade artistic quality, many of the pieces are functional and can be used in the home, including objects for the kitchen and bathroom as well as one-of-a-kind mosaic tables that can be custom made. The tables are often inlaid with gems or small handmade ceramic pieces.

For more information about Art Walk or Kids Walk Activities at the Library,  pick up a free brochure at any participating venue and around town or call Telluride Arts 970-728-3930, TellurideArts.org, or Telluride Arts on Facebook and Twitter.