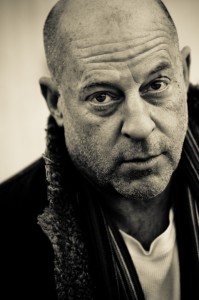 Some songwriters just strike down to the heart of things, shaking us with words and wires and something inescapably human. Jerry Joseph is that kind of composer, a rocker with emotional scalpel that cuts deep every time.

Joseph wears his influences on his sleeve – Elvis Costello, Neil Young, John Lennon, Steve Earle – but tailors their sounds in ways that make the outcome distinctly his own. And he probes the politics of love and nations with equal dexterity. By turns tough and unbelievably bruised, Joseph’s work manages to be joyfully pissed off and achingly bittersweet, often within the space of just a few verses. There is a healthy restlessness to his music, a stripe of modernity and tireless engagement with the world that places him right next to younger contemporaries like Conor Oberst (“Bright Eyes”) and Ryan Adams.

Joseph has worked tirelessly since the late ’80s/early’90s in Little Women, averaging an album a year since 1994. Often live-on-the-floor affairs, there is an immediacy and personal reach to his albums like those of kindred spirits Chris Whitley and Vic Chesnutt, fellow toilers in the under-sung singer-songwriter field.

Like the best musicians, there is always a forward motion to Joseph’s work, a force that propels things foreword, something we hears loud and clear on his latest project, The Denmark Veseys.

The Denmark Veseys is a malleable band named after a controversial slave revolt leader from the 1800s, based around the core of Joseph and master percussionist Steve Drizos. The Denmark Veseys released their self-titled debut in early 2008, featuring songs ranging from the Buzzcocks-like punk pop of “Helena Bucket” to the masterful Americana sway of “Cochise” and incendiary agit-prop rockers like “Ho Chi Minh.”

Currently living in Harlem, N.Y., Joseph is a tireless listener to everything that comes his way, filtering in the hip-hop of Aesop Rock and the Jamaican strains that drift through his window as easily as he incorporates the more brainy, confessional strains of his core inspirations.

Joseph embodies original rock’s boundary-free spirit that pulled happy handfuls from country, blues, jazz and folk to create something that struts and wails. From dub to backwoods laments, his music stretches to incorporate whatever is flipping his switch at any given moment, yet it is always grounded in something indefinably Jerry J. That free-ranging is most delightfully loose in Stockholm Syndrome, his on-again, off-again collaboration with Dave Schools (Widespread Panic), Eric McFadden (EMT, P-Funk), Wally Ingram (David Lindley, Sheryl Crow) and Danny Louis (Gov’t Mule).

“Usually, if I think something’s cool it stays with me,” said Joseph. “When I write I go to my brother’s house in Mexico, and I don’t write with drum machines or four-tracks. I tend to write on just acoustic guitar, and sometimes I can get out a couple songs a day if I’m in the groove. I’m finally getting old enough that I might actually get good at this (laughs). I think the writers that are aging and growing with their art are fascinating. This is really the first time with pop music that we’ve been able to watch people get old. If they’re cool and writing about it, like Dylan or Neil Young, they’re sort of documenting the process. In my own broken way, I’m trying to do that, too.”

Concert is seats in.