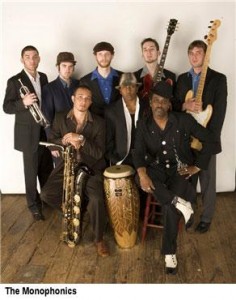 Over the past seven years, Monophonics have staked their claim as one of California’s premier bands. Raised amid the Bay Area’s rich musical culture, Monophonics has proudly carried on the tradition of music native to their hometown.

A mainstay of San Francisco venues such as the Boom Boom Room and the Independent, Monophonics has created a national buzz and fervent local following, sharing the stage and bill with such names as Budos Band, Orgone, Soulive, Macy Gray, Dr. Lonnie Smith, The New Mastersounds, Dirty Dozen Brass Band, Dumpstafunk, Charles Walker & The Dynamites and many more.

The group’s recording credits include tracks with the The New Mastersounds and Karl Denson (Karl Denson’s Tiny Universe, Grey Boy All-Stars), who is also featured on their latest release and second album, Into the Infrasounds. The album also includes musical guests Mic Gillete of Tower of Power & Jonathan Korty of Vinyl.

Monophonic’s touring schedule has brought their signature rowdy, hard-hitting live set to over 300 dates from California to Mississippi, as well as major music festivals including High Sierra, Joshua Tree and Las Tortugas. Additionally, the ensemble has established themselves as yearly residents at the legendary New Orleans Jazz Festival.

Monophonics has been featured in various magazines including Relix‘s “On the Rise” section, and in 2007, the group was awarded best Funk/Soul/R&B band in SF Weekly‘s “Best of the Bay Awards.”

In 2011, the group showcased their new sound with the release of Like Yesterday, (Colemine Records). The record features members of the Los Angeles based funk group Orgone. The same year, Monophonics completed another album, lacing the sounds of the late 1960’s/early 1970’s psych soul with fuzz guitars, freaky synthesizers, hard-driving drums, and bass, funky horns, and gritty vocals, a sonic testimony to the evolution of this six-piece unit.

If you missed Monophonics at this year’s Blues & Brews, you won’t want to miss them at Saturday night encore.

For a preview, watch this video.