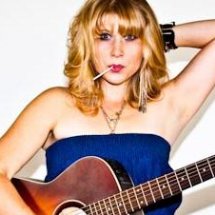 And it’s in town.

Caitlin Cannon was born in Alabama. Mom is a hairdresser and dad, a lineman for the Huntsville Utilities. Grandma raised her on Cole Porter, put curlers in her hair and drove her to auditions all over the city. Caitlin was enrolled in a performing arts academy and soon branched out into community and regional theatre productions. During those early years, her father moved to a farm in Hot Rock, Tennessee, and on the long drives to and fro, she became friendly with everything playing on the local country radio stations. At age 10, she was given her first CD player and began stocking her collection with The Beatles, Queen, Hank Williams, Rosanne Cash, Steve Earle, Reba McEntire, Dolly Parton and The Judds.

Her grandmother bought her first guitar just before she moved with her mother and stepfather to Durango Colorado: The Wild West. Those raucous high school days brought with them a passion for more Alt-C. She quickly became enamored with Uncle Tupelo, Ryan Adams, Jason Isabel, Tift Merritt, Jenny Lewis, Patty Griffin and Lucinda Williams. All the while continuing her theatre pursuits, Caitlin was awarded the Patricia Barry (The Twilight Zone) Scholarship, to attend Stephens College, a celebrated women’s performing arts school, in operation since 1833.

Caitlin stuffed her boots in a duffel and bought a plane ticket for New York City, where she enrolled in the two-year Meisner training program under the instruction of Bill Esper. She also began composing original music performed in venues such as Hill Country, The Living Room, Piano’s The Knitting Factory, Hanks Saloon, Life Cafe, Spike Hill, Pete’s Candy Store, Jalopy Theatre, Zebulon, and Kathryn’s House, where she opened for David Olney and split the bill with Eleanore Whitmore of Steve Earle and the Dukes and Duchesses. In Brooklyn, New York, Caitlin released her first album of original songs, self titled: Caitlin Cannon and the Artillery. The record delicately explores uncomfortable concepts and beautifully expresses them through chirpy melodies (“Fire Escape”) and evocative arrangements (“Stranger”).

Caitlin recently relocated to the Midwest and joined up with the “new” Artillery.

Want a preview of the concert?