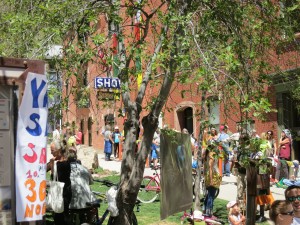 Line outside the Sheridan Opera House

It’s tough when the climax comes at the beginning.

Memorial weekend is the official kick-off of Telluride’s robust summer festival season and Memorial weekend twins with Mountainfilm, an annual gathering of the tribe laser-focused on protecting and preserving endangered species, cultures and ideas, while celebrating outdoor adventure and mountain life. Given the choice, few events would volunteer to take to the stage on the heels on Mountainfilm. Like kids and dogs, Holworthy’s – shorthand for co-directors David Holbrooke and Peter Kenworthy – tribe is one tough act to follow.

Paraphrasing Wade Davis paraphrasing Ernest Hemingway, Mountainfilm in Telluride has “something to say the world needs to hear”  – starting with the speakers at Friday’s Moving Mountains Symposium on Climate Solutions, hosted by the irrepressible John Hockenberry.

For the bottom line on the Symposium, I pilfer again, this time from an essay by Paul Hawken entitled “The Most Amazing Challenge,” from a book of essays by luminaries entitled “Moral Ground,” edited (with Michael P. Nelson) by Symposium guest speaker and inspired environment philosopher, Kathleen Dean Moore.

“(The Earth) sent you rain, sunsets, ripe cherries, night-blooming jasmine and that unbelievably cute person you are dating. Take the hint. And here’s the deal: Forget that this task of planet-saving is not possible in the time required. Don’t be put off by people who know what is not possible. Do what needs to be done, and check to see if it was impossible only after you are done.”

Borrow a leaf from can-do (has-done) Harvard wizard David Nocera, who has invented an artificial “leaf” which, by mimicking the process of photosynthesis, could turn into the “MacDonald’s of energy.”

Do as Pulitzer Prize-winning journalist David Sassoon (founder, Inside Climate News) suggests and look to Germany, a “functional democracy,” for a model of a sustainable future based on a mix of alternative energy sources. Here at home help reframe the debate from “energy security” to “environmental security.” (Otherwise lock the door behind you and find a new planet to live.)

Jonathan Cedar of Bio Lite showed us how he leveraged existing technology to create a device that could help eliminate 500 tons of black carbon from the atmosphere – while charging cell phones.

The iconic Bill McKibben of 350.org invited everyone (via Skype) to turn up the heat on the government through his summerheat.org initiative. (But first, you might want to get fitted for an orange jumpsuit.)

Erin Barnes, co-founder of ioby, an acronym for “in our backyards,” suggests civic engagement in sustainable grassroots  environmenta; projects is another constructive way to go: Neighbors can help neighbors by using the nonprofit’s ingenious web-based, crowd-resourcing platform – which locals Kris Holstrom (of EcoAction Partners) and Steve Cieciuch did when they launched Telluride Grown. 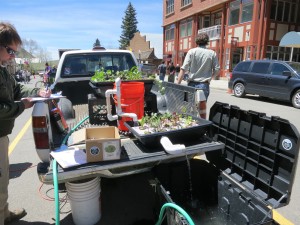 Telluride Grown is a project that down the road would allow the Telluride region to raise fish and organic vegetables for local consumption. Cieciuch spoke from the heart asking for support. (We suggest showing up Tuesday, June 4, at the Town Council meeting.)

And did you know Telluride is home to the world’s largest community-owned solar array (in Paradox)? Brad Zaporski, manager, member services and marketing at the San Miguel Power Association, also a speaker, enjoined locals in the audience to purchase panels to reduce the region’s carbon output.

How do we navigate this period of extremely rapid change? How do we become the solutions we need? Activist Tim DeChristopher answered with one word:  “Together.”

“Together” in films we managed to see:

Together with his family, boarder extraordinaire Kevin Pearce, who suffered a traumatic brain injury, was able to re-imagine himself and find renewed purpose and meaning in life in the wake of his lost Olympic dream. His story is beautifully, unsentimentally told in the HBO documentary, “The Crash Reel,” directed by Lucy Walker. The film won Mountainfilm’s Student Choice Award. 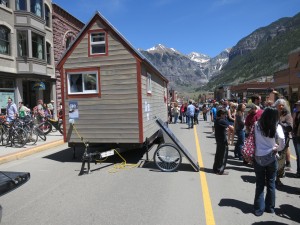 A Tiny House on Main Street

Together with his partner Merete Mueller, Chris Smith built his dream home (under 200 square feet), recording the progress of the project – and a burgeoning movement that rethinks the American Dream – in their engaging and informative feature-length documentary ‘Tiny: A Story About Living Small.” Mountainfilm was the doc’s Colorado premiere.

In “Uranium Drive-In,” Telluride local and director Suzan Beraza of Reel Thing productions became an objective (though empathic) observer, ultimately painting a vivid portrait with her camera of the people behind the complex issues surrounding a proposed uranium mill in the Paradox Valley. The heart of the doc is the emotional debate pitting a population desperate for jobs and financial stability against opposition from an environmental group based in Telluride. It is a story, with variations on the theme, that is repeating itself throughout our country, even the world, as the gap between haves and have-nots widens. Can these groups find common ground and a way to come together? “Uranium Drive-In” leaves the door open.

And while we are on the subject of uranium and nuclear energy, in “Pandora’s Promise,” director Robert Stone challenges much of what we accept as fact about the negative side of nuclear as an alternative to fossil fuels, surprising given that the director’s first film was an anti-nuclear weapons documentary, “Radio Bikini,” nominated for the Academy Award for Best Documentary in 1988. 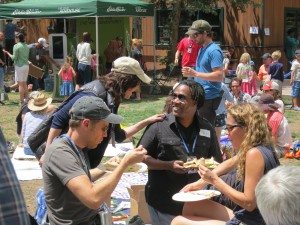 In the hard-hitting, gut wrenching “God Loves Uganda,” Oscar-winner Roger Ross Williams exposes the missionary movement in Uganda as an outgrowth of Africa’s colonialist past and a 21st -century crusade to recreate a continent of people in the image and likeness of America’s most extreme fundamentalists. Translation: gays not tolerated. Williams, a gay man himself, together with pastor Kapya Kaoma, hopes “God Loves Uganda” will serve as a catalyst for change, through its international screening tour and social action campaign. The doc won hearts and minds – and the Mountainfilm’s Audience Award.

“Xmas Without China,” featuring Tom Xia and directed by Alicia Dwyer, tells the heart-warming, eye-opening, very funny story of two families living worlds apart in the same community – and the need to avoid our impulses to paint an entire country, namely China, with one broad brush because of a few squeaky wheels. The two separate worlds collide when pride and mischief inspire Chinese immigrant Tom Xia to challenge the Jones family – yes, the proverbial Joneses – to spend the month of December and celebrate Christmas without any Chinese products. Fed up with the recalls, the Jones family accepts the consumer “Mission Impossible” and is drawn into a surprising intercultural exchange with the Xias. Mountainfilm audiences laughed out loud at the action on the screen – then at themselves as the barbs hit home.

“Dirty Wars” is one film in a trilogy that included Greg Barker’s “Manhunt” and “Which Way Is the Front Line From Here?” that purports to provide the backstory to some of the headlines about the so-called “War on Terror.” In this dark and disturbing (and very one-sided) doc, reporter Jeremy Scahill of The Nation suggests a top secret group within our military has gone rogue – and no one in power seems to care. “Dirty Wars” won Mountainfilm’s Cinematographer’s Award.

The coffee talk was billed as “Future of the CIA.” On hand were Greg Barker, director of HBO’s “Manhunt,” the true story behind the search for Bin Laden; former CIA analyst (or targeter) Nada Bakos (in “Manhunt”); retired CIA operative Marty Martin, a colorful Arab speaker from Louisiana, also in “Manhunt”; and Cohen. In the end, no one had a crystal ball. The future of the CIA got buried in a wide-ranging conversation summarized in part below:

• Iran – If we go in, potentially the 3,000 mile wide front from West Iraq to Eastern Afghanistan could turn against us. How could we continue to say we don’t hate Muslims if we enter a third war in the region populated by Muslims? “Anyone who thinks another land war is an option should have his head examined.” (RC)

Two years after the death of bin Laden, experts like Nada Bakos say the West can’t afford to discount the connection between the Sunni militant group, al-Qaeda and the theocratic Shia government in Iran. “Iran turns a blind eye to al-Qaeda,” (NB)

• War on Terror- “Let’s get out of the ‘War on Terror’ paradigm with its license to use military force wherever we like.” Cohen quoted President James Madison to drive his point home: “No country that places itself in perpetuity at war can preserve peace.” (RC)

• Drones – There have been about 380 drone strikes under Obama, over 4,000 dead, about 14 – 20 percent of whom were civilians. We are now doing “signature strikes,” which means analysts simply look at patterns of behavior such as “young men of a certain age, places frequented, etc.” and take people down based on the data alone. Actual names and faces do not enter into the calculation. “The review process has been and remains inadequate.” (RC)

• Syria – Assad’s family has been in power for 42 years. “I think their time is up, although Iran remains a strong Ally. ” (RC.) But if Assad falls, it is not clear how Syria as a country holds together. “Iraq is a mess, but less of a mess,” (RC). “Al Qaeda or Hezbollah are on hand to fill in the power void,” (NB).

• Killing of Bin Laden. “Kill/capture is the method of choice for the Special Forces. Abbottabad was one of about 16 missions in the same area that night.” (GB)

• Hezbollah. “Forget al-Qaeda. Hezbollah is the ‘A’ team and already has sleeper cells in the U.S.” (MM)

• Israel/Palestine. “All these pieces are linked. Our view of the region has to be holistic.”

With organizations like the more moderate J Street growing more prominent, Cohen believes the debate, until now all but shut down politically by blind support of Israel, could begin to move. He suggested watching the documentary “Gatekeepers,” in which six former heads of the Shin Bet, Israel’s anti-terrorist agency, talk about the need to reconsider hard-line positions and advocate a conciliatory approach toward their enemies based on a two-state solution. 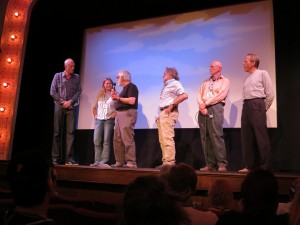 Festival Directors past and present

Scientist, scholar, poet, filmmaker, river guide, photographer, passionate defender of all of life’s diversity and ardent Mountainfilm supporter Wade Davis, who credits Mountainfilm with helping to shape his career, visited the party by Skype. He summed up the vibe in the room – and Mountainfilm in general:

“Mountainfilm  is a celebration of faith, hope, charity and wonder. It is one of the most important events in the world.”

At the closing picnic, Holbrooke said #35 will be a hard one to top.

But he will because when Hobrooke took over the gig, he took to heart some really good advice from Silverman: “put on a show.”

A natural born showman, he always does.