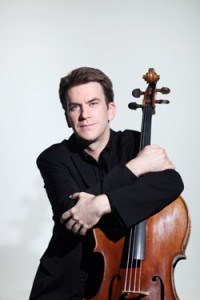 The 11th annual Telluride Musicfest continues this week, with programs based on the theme “Bohemians.”

“Bohemian folk melodies are beautifully expressive, there’s a sense of emotions being very close to the surface, and Bohemian rhythmic impulses are unique in Eastern European music,” explains Musicfest artistic director  and violinist extraordinaire Maria Bachmann of the Trio Solisti.

Among the musicians scheduled to perform on those programs is cellist Edward Arron, artistic director of the New York Metropolitan Museum “Artists in Concert” series.

Google reviews on any one of the bravura soloists who gather in Telluride every summer for Musicfest and be confronted with a wall of superlatives: Bachmann, Trio Solisti, Adam Neiman, Toby Appel, Kathryn Lockwood, all returning guest musicians, or the other newcomer to the party, violist Richard O’Neill, one of the few violists to receive The Avery Fisher Career Grant and a Grammy Award nomination. As with his colleagues, Arron’s raves go over the top for his elegant musicianship, impassioned performances, and creative programming.

“Edward Arron is not only one of New York’s most exciting young cellists but also an inventive impresario,” The New Yorker.

“Arron displayed a satiny tone and a light, elegant touch in the Haydn, whose bearish technical demands belie its classic gentility. He sang out beautifully in the Adagio, and his artistic sensibility was uncompromising throughout,” The Cincinnati Post.

“The young, gifted and accomplished players all seem on the verge of significant careers, as exemplified by the superb cellist Edward Arron,” The New York Times.

Edward Arron made his New York recital debut in 2000 at the Metropolitan Museum of Art. Earlier that year, he performed Vivaldi’s Concerto for Two Cellos with Yo-Yo Ma and the Orchestra of St. Luke’s at the Opening Night Gala of the Caramoor International Festival. Since that time, Mr. Arron has appeared in recital, as a soloist with orchestra, and as a chamber musician throughout the United States, Europe and Asia. The 2012-2013 season marked Arron’s 10th anniversary season as the artistic director of the Metropolitan Museum Artists in Concert, a chamber music series created in 2003 to celebrate the 50th anniversary of the Museum’s prestigious Concerts and Lectures series. Arron is also artistic director of the Caramoor Virtuosi, the resident chamber ensemble of the Caramoor International Music Festival.

Arron began his studies on the cello at age seven in Cincinnati and, at age ten, moved to New York, where he continued his studies with Peter Wiley. He is a graduate of the Juilliard School. Currently, Mr. Arron serves on the faculty of New York University.

To learn more about Edward Arron’s career and his involvement with Musicfest, click the “play” button.