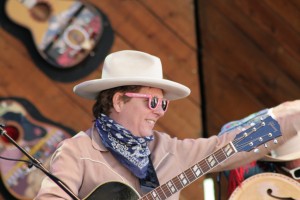 The story will get told many times in many ways, each time with a slightly different spin.

My abbreviated version of the history of the Telluride Bluegrass Festival, which celebrates its 40th anniversary this coming weekend,Thursday, June 20 – Sunday, June 23, goes this way.

Forty years ago, Telluride musicians John “Picker” Herndon, Bruce Lites, J.B. Mateotti, Kooster McAllister, and Fred Shellman, collectively known as “Fall Creek,” played during the town’s Fourth of July celebration. After returning from the Third Annual Walnut Valley Festival and national picking championships in Winfield, Kansas, the Fall Creek boys decided to start a Bluegrass Festival in Telluride. And just like that, a toy town in the southern Rockies came to host a world-class outdoor musical happening, which became home (at least once a year) to Festivarians (Bluegrass regulars)  and some of the greatest performing artists in the world, among them, Grammy-winner (Traditional Folk Category, 2005) Tim O’Brien.

Tim O’Brien’s early history is common knowledge around these parts, how he grew up in Wheeling, West Virginia, surrounded by classic country and bluegrass music. We may not remember some of the finer points of his life such as the fact Tim bagged a liberal arts education following his bliss to Boulder, Colorado, where a burgeoning, eccentric roots music scene was forming. We may not have that information at our fingertips, but Telluriders for sure know what followed: Ophelia Swing Band, Hot Rize, and its alter-ego country swing band, Red Knuckles and the Trailblazers, the stuff of Telluride Bluegrass Festival legend.

The legend comes to life Sunday June 23, 4:15 p.m., when Tim performs once again as Red Knuckles.

When I interviewed Tim O’Brien for the silver anniversary of Telluride Bluegrass he had this to say: “From an inestimable event it has become so mellow, it’s venerable.”

Tim’s spin looking back over 40 years of Telluride Bluegrass will be included in a coffee table (read “collectible”) book to be published by Planet Blugrass this fall. The case-bound magnum opus includes 200+ pages of hundreds of photos, every festival poster, a year-by-year account of the festival, and dozens of artist interviews, including Tim’s colorful contribution, as follows:

On Independence Day 1973, a fella named Scott Brown spearheaded a new and special celebration in Telluride, Colorado. The event recalled the earlier trapper’s rendezvous, and the much earlier Bear Dance of the local Ute tribe, annual events which took place in that same mountain valley. Both traditions welcomed the liberation and abundance of spring, cast off the cares of a long winter, and provided a welcome opportunity for courtship. Law added at least one new and special ingredient to the obligatory fireworks and barbeque: bluegrass music. Another ingredient, just important to the chemical reaction that was about to take place the following year with the inauguration of the Telluride Bluegrass festival, was the growing community of hippy types in the valley. Local musicians Fred Shellman, John Herndon, J.B. Matiotti, and Kooster McAllister were arguably hippies and they provided the bluegrass that day.

That 4th of July was the last one I spent at home in West Virginia. In the fall of that year, I withdrew from college, worked in a tree nursery to save money to buy a car, and started what has become a 40-year attempt at a career in music. While I was loading flagstone at the tree nursery, the Telluride pickers were attending the second annual Walnut Valley flat-picking festival in Winfield, Kansas. They drove back to Telluride inspired to launch a festival of their own. A month or so later, I packed my scratched and much loved Doc Watson, Django, and Band LP’s into a ’68 Volvo and drove west. After a winter in Jackson Hole and some summer bluegrass festivals in the east, I ping-ponged back to Boulder, which is where I met future festival director Fred Shellman. On my first visit to Fred and Mary Kay’s house in Ophir, I noticed that our record collections intersected in all kinds of ways.

There was no Internet then, let alone social media, but bluegrass and folk music festivals were really starting to flourish. They helped misfits like me find like-minded folks, some of whom were attractive members of the opposite sex. Here was a way we could all get high and lonesome together! We had learned some John Prine and Hank Williams, started digging into Bill Monroe and Flatt and Scruggs, and moved our Beatles and Crosby Stills and Nash records to the bottom of the pile. When I left West Virginia, I found I could consistently hook an audience by mentioning my home state and singing country songs. I studied some jazz but onstage I wore cowboy clothes and even had a western stage persona, Howdy Skies. Yes, the skies were opening for me and for many of us, and in spite of a depressed economy, I was happily on my own, building a life in sunny Colorado.

I had missed the first festival but that second one was a pretty good ramp up, with much anticipation. I had met a pretty girl, my future ex wife, in May, and she came with me as my date. We traveled with the rest of the Ophelia Swing Band in Duane Webster’s International Crew Cab, and we all stayed in one room. Duane was nice enough to take the top bunk and leave the bottom for Kit and me. I remember listening at the door of the shed backstage as Newgrass warmed up inside. John Cowan, the new guy in the band, sang like a bird and they called him Jelly. Sam and crew gave a free post festival show for locals on Monday at the Nugget that year. Courtney Johnson had briefly quit the band over their booking at Telluride – he said it was too damned far away – but he was coaxed back and was easily won over once he got there. The third year added fellow string music explorer John Hartford to the returning Newgrass, and a certain tone was set. There was a particularly life affirming post festival jam at Dunton hot springs that year with Mr. Hartford and most of the Newgrass boys. My future Hot Rize mate Pete Wernick and I were lucky to get inside the cabin door before they locked it.  Dave and Karen Lamb now run the fine music store in Telluride, but back then they were arranging the back stage catering, which was peanut butter sandwiches, chips, and carrot sticks, and I tell you we were glad to have it.

Looking out the window of the Hot Rize bus at 4a.m. to see Doug Dillard in a poncho singing by a backstage bonfire; my sister Mollie sitting under a tarp in the audience her first summer in Colorado; Doc Watson and Norman Blake yelling at each other between tent walls as they warmed up; sky divers landing in the audience area; Bill Monroe holding my one year old son Jackson in his arms as he sang “I Saw The Light”; playing nervous encores with Steve Goodman in the afternoons and drunken encores with Sam Bush late at night; John Cowan as Bunny Knuckles singing “You Ain’t Woman Enough To Take My Man”; trying to sing the high harmony on Dan Fogelberg’s set; bluegrasses lining up to play one of Chris Daniels’ electric guitars during after hours jams at the Sheridan Opera House; weddings on the hill behind the stage; a one armed Aron Ralston snapping a pic of me onstage as I told the least appropriate joke for the occasion; amazing sets by Strength In Numbers, Solomon Burke, David Byrne, and Robert Plant; and a rainbow in a hail storm.

In 2005, I sat out the festival just to see what that would be like. It sucked.

I know the festival has grown up a lot, but it always seemed to be a big event. A generation of musicians was growing up together, and the music was growing too. The festival, both a yearly clan meeting and showcase of the best bluegrass has to offer, has long been a place to bring your best new stuff. Fans feed the muse by coming to celebrate that mountain sun and the fresh sounds on the longest days of the year. Over the years, additions like Pete Rowan, Jerry Douglas, Bela Fleck, Edgar Meyer, Chris Thile, Yonder Salmon Cheese and Sons, and Sarah Jarosz have thickened an already hearty stew. Dan Sadowsky as Pastor Mustard added his special salt! Most agree that bluegrass crystallized in 1945 when Bill Monroe hired Earl Scruggs, but since that time the music has constantly evolved. You can survey the second half of that evolution in the history of Telluride Bluegrass.

Check out this video of Tim in Hot Rize from 1982, when Telluride Bluegrass – and Tim – were callow young things.