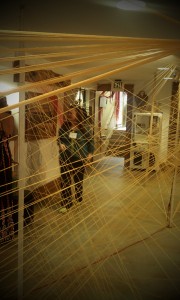 We are talking the 2nd annual Telluride Arts‘ Art + Architecture Weekend, three full days of exploring the work of artists, chefs, musicians, dancers, and architects for a snapshot of the talent in the Telluride Creative District. The kick off was Wednesday, July 17, and tours were Friday, July 19 – Sunday, July 21.

How did it go? Art + Architecture was an elegantly conceived, largely well-executed – kudos to Telluride Arts’ executive director Kate Jones and her assistant director, Britt Markey – case in point of the whole winding up greater than the sum of its parts. And it was an elaborate exercise in community-building. Think First Thursday Art Walk on steroids.

At stop after stop, we met and chatted happily with people we rarely if ever would see, because they fall outside the little circle of our life. We saw places we never visit, because they are sharp left turns off our beaten path. I would sum up Art + Architecture as a great opportunity for critical noticing. And what we saw, enhanced our pride of place. 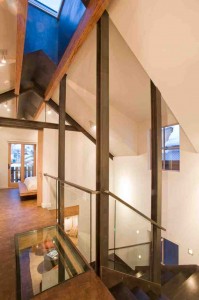 Home designed by One Architects, a knock out.

Yes, there are things Kate and Britt might want to work on for next year. Could the marketing be ramped up so the excitement spreads to the outlying venues? Might Telluride Arts consider using electric vehicles to transport guests from one end of town to the other much like Film Festival, especially should temperatures climb or the rains pour down? Why not, and the vehicles, whatever they are, would provide opportunities for promotion. Could the event be rescheduled for a slightly less busy time? Well maybe. But is there a less busy time on Telluride’s packed summer calendar? Could the Friday tour be scheduled later in the day so people can attend after work. (Friday was the quietest day at the venues.)

“We believe Art + Architecture” was a fabulous weekend full of intimate experiences and personal connections with the creative people of Telluride,” said Kate.

For example, at La Marmotte, Telluride Inside… and Out met its newest writer, part-time local and art critic Wendy Atwell, who weighs in below on her experience by zeroing in on the happenings at the French restaurant…

The small, intimate setting of Telluride’s La Marmotte gives off a quirky retro vibe, like it belongs somewhere in mountainous Europe during the 1970s, rather than down the street from Smuggler’s Brew Pub. That idiosyncratic feeling was further enhanced during Telluride Arts’ Art + Architecture’s culinary tour on Saturday, July 20, part of a wonderful weekend that also included studio and home tours, music and art, designed to showcasing the region’s deep talent pool. 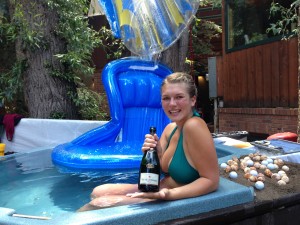 Guests to La Marmotte were greeted at the door by a barbecued split pig, its smoky aroma, toasted hooves, and snout clearly identifying the origin of the meat – and certifying the place as a serious eating establishment. The pig was a bold gesture in health-conscious Telluride, where vegan food vendors at the Farmer’s Market sell food with prices on par with the salads at this white linen restaurant.

While the pig was being prepped for later that evening, an even more improbable, sensational treat beckoned guests to the restaurant’s back patio. Two “mermaids,” sparkling with glitter and resplendent in bikinis, served champagne out of a hot tub “bar.” Thankfully, Saturday was warm, because the beach setting also included a slip-n-slide rigged to a tree overhead that constantly sprayed and dripped water, simulating a bizarre drugstore grotto. The hot tub was decorated with escargot shells, golf balls, and imported sand. “Poolside,” Reggie Mairen shucked oysters shipped into town from Duxbury, Massachusetts and served them on the half shell with a mignonette of red wine, black pepper and shallots. Think “Caddyshack”meets St. Tropez (only the mermaids were overdressed for the South of France).

Overall, chef/owner Mark Reggiannini achieved what he was after: pure magic and lots of fun. Our glasses filled with champagne, we proceeded to check out the art.

Most of the tables had been cleared out to make room for haunting sculptures by Adrienne Lent. Whether teapots, figures, or mobiles, Lent’s pieces have surreal overtones, with a color palette and aesthetic reminiscent of Tim Burton. “Stonehenge” (2011) is made from plaster, wax, and found objects. This series of small figures were seated on a metal pot, mouths open, emitting silent screams; their wax coating conjuring postmodern mummies or ghosts.

Lent moved to Telluride from New Orleans after Hurricane Katrina and there is a strong Big Easy influence in her art. In “Do You Know What It Means to Miss New Orleans?” (2011) is a ceramic figure who sits on a chair dressed in tulle and muslin. The figure resembles a child bride, but up close appears strangely androgynous and slightly alien. Her arm joints are stitched together like a doll and the dreamy closed-eye expression suggests she is from another world. (Likely how Lent felt when forced to abandon her home.)

Since the late 1970s, long-time local Jane Goren has been into recycling: vintage windows, floor samples, cast off mining equipment, even champagne cork cages. Using the reverse glass painting method, Goren paints women in windows, creating a double entendre from the days of cribs in Telluride, where Goren now has a studio. The rich, bright colors, evocative of the Pattern and Decoration movement, draws in her viewers to playful scenes.

Goren also created miniature pieces, such as “Naked Skier”or “Barfight,” crafted from champagne wires and floor samples, all studies of figures in motion that amuse like cartoons.

All credit to Telluride Arts’s executive director Kate Jones, whose passion for the Art + Architecture weekend inspired artists, chefs, restaurants, and architects to put time, work, and energy into the event. La Marmotte is just one great example –  there were 35 artists, 17 venues – that collectively made a strong point about how everyday settings of homes and eateries can be transformed into collaborative spaces where conversations come alive and new relationships are formed over good art, food, and drink.

And for an overview in images of Telluride Arts’ Art + Architecture Weekend, watch Clint Viebrock’s video.