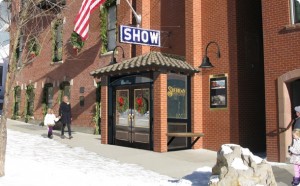 After months of fundraising and more than a year of planning and designing, the Sheridan Opera House entryway is getting a facelift.

The entryway will feature: a roof of faux ceramic tiles fashioned of tin to replicate the “California style” roof on the projection booth (custom made), beveled glass windows, painted steel trim, brick pillars, custom doors to match the doors currently in place and a bench on the south exterior of the structure.

The Opera House was the last commercial building built in the mining town of Telluride until the town saw a reawakening as a ski area in the late 1960s/early  1970s. A cheaply constructed wood frame and stucco entry, ticket office and stair enclosure was constructed on the south side of the well-constructed brick Opera House. The remnants of the old entryway were removed in 1985 when its owners redesigned the stairs, ticket office and entry.

The building is now owned and operated by the Sheridan Arts Foundation, a non- profit dedicated to preserving the historic Sheridan Opera House as an arts and culture resource for the Telluride community. The current entryway, which consists of double doors that open directly to the outside, made it difficult to do business at the box office in the winter when the doors opened and cold air flowed into the lobby while guests purchased tickets or waited for the house to open.

The first purpose of this restoration is to create an airlock between the outside of the building and the lobby. The result will be a warmer lobby and a utilities cost savings.

The second purpose of the restoration is to move one step further in the overall restoration of the Sheridan Opera House and provide the landmark structure with a much-deserved sense of identity with a primary focus on creating a distinctive main entry. Most visitors who are unfamiliar with Telluride believe the main door to the SOH is merely a side door to the New Sheridan Hotel, since there is no clear differentiation between the two buildings.

Local architect and history buff George Greenbank designed the structure based on historic images and input from Telluride’s Historical Architectural Review Commission. He was assisted by the SAF staff and board. Greenbank’s efforts focused on achieving a design that was historically appropriate.

Mike Osborne (Osborne Builders) is the general contractor on the project. Onsight Builders and Hubbard Artworks are also hard at work.

The project is managed internally by SAF Director of Finance and Business Affairs, Steve Palamar.  According to Palamar, “… the project was extremely well-received by HARC, and we are excited to better serve the Telluride Community by adding comfort and distinction to one of Telluride’s most historically-significant and well-used buildings.”

The project was estimated to cost $102,000 and after months of fundraising and the generous support of foundations, donors and seat sponsors, the Sheridan Arts Foundation raised the funds needed for the project.

Additional funds were raised through miscellaneous donations made online from ticket purchasers and donations in the SAF’s donation box in the SOH lobby.

“A huge thank you to everyone who donated money — anywhere from $5 online to writing a check for thousands of dollars,” said Programming Director Ronnie Palamar.

The SAF’s capital campaign is not over however. The next steps include lobby improvements, heating of the vestibule and new seats and a new movie screen for the theater.

The Sheridan Opera House’s seats were purchased by the SAF in the 1970s. They were refurbished and reupholstered in the last decade, but they are large and clunky and constantly stored in the SOH basement; new technology seats are more compact, lightweight and more comfortable.

To sponsor a seat visit SheridanOperaHouse.com and click on the “donate now” link on the right hand side of the home page.

There are several ways supporters can donate to this campaign:

• Donate to our Centennial Celebration Fund: make a donation of any size online when purchasing tickets online at SheridanOperaHouse.com or drop money in our donation box in the lobby of the Sheridan Opera House.

About the Sheridan Arts Foundation:

Founded as a 501(c) 3 non-profit in 1991, the Sheridan Arts Foundation’s mission is to preserve the historic theater to provide quality music and entertainment to the Telluride community and to offer educational programs to regional and national youth.