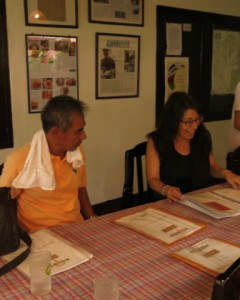 It was a typical day about town with a friend: morning tea, a round of errands, a long lunch, a visit to a museum, shopping, and a massage.

Typical if the friend is Esther White.

And the town, Chiang Mai.

Esther –  like our hosts Sunny Griffin and Steve Eiche, who live 1/2 hour outside the city in the resort community of Mae An – has two homes, which are linked by the ethos of nonconformity and the fact of being tourist economies: Telluride, Colorado, and Chiang Mai, Thailand.

How she got there is the typically atypical Telluride tale.

It begins in Ohio, where Esther grew up and segues to Michigan State, her alma mater. A detour to a hippy commune gets her to Colorado. She lands in town, her spiritual home, in 1973, just as Telluride opened for business as a ski resort, the protests of old-timers mourning the good old days of the Idarado Mines still hanging in the wind

Esther worked for years for the local post office. She now lives partly on that pension. She also earns a modest income teaching yoga to travelers and tourists passing through, but mostly to acquaintances from the large ex-pat community in her adopted second home, first visited in the 90s at the suggestion of a college friend.

Esther’s Thai digs on Ratchamankha Soi (near Wat Mengrai) in an ex-pat compound (her landlord is Italian married to a Thai) are charming – and large by Thai standards: living room, kitchen, three bedrooms and a large deck. Large is good because friends from Telluride tend to show up and stay. 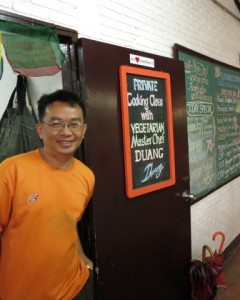 Lunch was at a favorite local, Brown Rice Organic Bistro, a haven for vegetarians, anyone really, who enjoy farm fresh ingredients (vegetables are picked daily from a patch of green out back) imaginatively prepared by chef/owner Mr. Duang to please the palate and the eye. Our feast  featured a mushroom curry, a salad of crispy tofu and mangoes, banana flower salad, and spring rolls. Lunch also included Esther’s lesson about how to eat Thai style: the back of your fork pushes your food onto a soup spoon, then into your mouth. Knives are not used. Neither are chopsticks (except with noodles).

Up next, a visit to the Chiang Mai City Arts & Cultural Centre for an overview of local history.

Petroglyphs, tools and jewelry are enduring evidence of Chiang Mai’s pre-history dating back as far as 12,000 BC. Remains of the Two Rivers Civilization illustrate how the Kok and Ping River Valleys were united by one king, Mengrai, in 1292, when Chiang Mai replaced Chiang Rai as the capital of the Lanna Kingdom.

During Mengrai’s reign, Chiang Mai (literally “New City”) became a major base of Theravada Buddhism and a number of the region’s famous wats (temple complexes) were built. (More came later under King Tilok.)

Today Chiang Mai is shedding its reputation as a sleepy back-packer hang, carving out a new identity as a trendy address for Thais and tourists alike. Boutique hotels and hot new restaurants are proliferating.

Chiang Mai thrives on its crafts trade, on display at the sprawling Warorot Market (and others, including the Night Bazaar and along the Tha Phae Road). 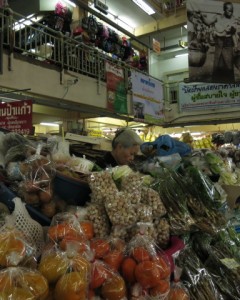 Esther took us to Warorot especially to check out the intricately woven threads made by the Hill Tribe people. (There are six main groups living in Northern Thailand, Akha, Hmong, Lisu, Karen, Lahu and Mien, who began to arrive in the area at the end of the 19th century when these semi nomadic people were pushed out of their native Tibet, Myanmar and China.)

For a newbie, Warorot is a cacophony of fashions, fashion accessories, food, housewares, and all manner of tchotchke. The place is totally overwhelming without a guide like Esther, who knows it like the back of her hand. Imagine a football field filled with the contents of your grandmother’s attic – then throw in the chatter of foreign tongues.

To recover from the press of crowds and the din, Esther took us to a favorite place for Thai massages: Pranom Health Massage.