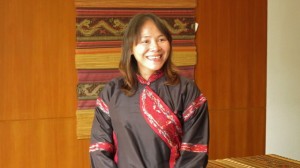 Thailand is the kingdom of wats or religious complexes. There about 30,000 in the country, which tend to serve a dual purpose: Buddhist monastery/temple and community center.

The basic layout of most wats follows set principles as do the functions of different buildings such as a chedi, a solid structure encasing a relic of the Buddha, a hair fragment or a bone, or the ashes of a king.

But in Thailand, there are temples – and temples. Chedis and chedis.

Kachama at the Chedi Chiang Mai:

Some of the chedis are strictly secular, such as the quietly elegant Chedi Chiang Mai, whose walls encase living, breathing titans of industry, rather than remains of religious leaders or heads of state.

Behind the four-story bamboo-clad walls stands one of Thailand’s most strikingly boutique hotels, where Japanese ryokan (luxury inn) meets Louis Khan. The Chedi, like Kahn’s monumental, monolithic structures, does not try to hide its weight, materials, or how they were assembled. The structure epitomizes an unapologetic modernism.

And the Chedi is Chiang Mai’s only five-star hotel along the Mae Ping (river), where traditional fishing boats drift past the floor-to-ceiling sliding glass doors of all 84 serene guest rooms. 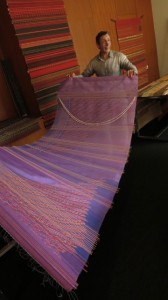 The day we visited, one of the hotel’s many conference rooms housed the work of one of the country’s finest textile artists, a half-Japanese, half-Thai woman known simply as Kachama.

As understated and elegant as its immediate surroundings, Kachama’s handwoven, mixed media fabric art – wall hangings, home furnishing accessories and clothing – are largely based on the designs of Thailand’s hill tribes.

Kachama’s work is sought after and collected all over Southeast Asia. This particular sales event was at the invitation of Hong Kong University’s Museum Society, which owns a commissioned piece by the artist. Our invitation to visit came because Kachama and husband Jean, her business manager, are close friends of our host and hostess in Chiang Mai,  Telluride locals Steve Eiche and Sunny Griffin.

After lunch at a river side restaurant (The Gallery) in Chiang Mai’s Old Town, our next stop was another of Chiang Mai’s luxury boutique hotels – this one on steroids.

The luxury resort known as the Dara Dhevi draws heavily on architectural and cultural influences of this historic Lanna Kingdom, (“Kingdom of Million Rice Fields”), centered in present-day northern Thailand from the 13th – 18th centuries.

Ancient palace-like structures, traditional Lanna-style villas and colonial mansions sit on over 60 acres that house accommodations, restaurants, high-end retail shops, and recreational facilities such as a world-class spa. Picture an adult Disneyland designed for the whims of one percent and you’ll get pretty close. (Rumor has it the place set its investors back $3 billion.)

From secular splendor back to sacred. Our next stop of the day was the spectacular Buddhist shrine Doi Suthep. 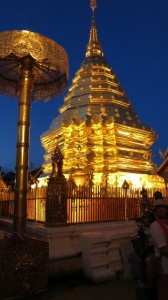 Doi Suthep is a thickly forested mountain in the twin-peaked Doi Suthep-Doi Pui National Park. Near its 5,250-foot summit is Wat Phra That Doi Suthep.

From Chiang Mai, our guide Nat Poj (hands down the best on the country and an expert especially about the lifestyle and culture of Northern Thailand) drove us up the road that snakes its way up the hillside, where the payoff includes a central chedi, a gold-plated Lanna-style structure, which glowed in the light of sunset.

According to the legend Nat explained, in the 1390s King Ku Na’s sacred white elephant selected the site by marching up the mountain, trumpeting and turning three times when he liked what he saw.

Today Doi Suthep is widely regarded as a cherished symbol of Lanna Thailand.

Or yet another symbol of that era if you are among the rich and famous who worship at the Dhara Devi.

The other half lives at night markets such as Anusarn, our final stop of the day.

The Anusarn Market is a place to enjoy low-cost meals of many different varieties: Thai, Asian, seafood, and Indian goodies are served at several large open diners. Highly recommended: Best Taste Kitchen, Ping Ping Restaurant and the Sea Food Restaurant. Homesick for western food? Try O’Malley’s Irish Pub for a stew with a pint of Guinness or to grab a burger.

The market also houses several top notch open air Thai massage studios that can treat between 10 and 20 customers at a time. Our party of five settled into five leather recliners at a place that offered foot massage. The hour-long indulgence set us back about 120 baht or $4 each. With tip.

Along with the food spots and massage studios, Anusarn of course features rows and rows of  stalls and shops selling clothing, shoes, lighting, music, handicrafts, gifts, and souvenirs. (Remember to bargain for your purchases.)

We passed on conspicuous consumption, heading instead to the Katoey show. 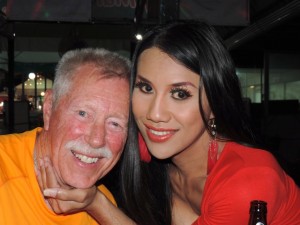 A katoey is a lady boy, a transgender woman or an effeminate male. A large number of Thais think of katoeys as belonging to a third gender – as do many katoeys – a female soul trapped inside a male body.

One psychologist explains the evolution (and preponderance) of lady boys as an outgrowth of Thai society’s two-class system. Sexual preference has little or nothing to do with the phenomenon.

The basic division in Thailand is between “haves” and “have nots.” While there are signs of an emerging middle class, the gap between the two prevailing classes remains immense. Growing up in a poor rural family, especially if a boy is not the first born, is often a case of the survival of the fittest. If a boy fails to exhibit strength and fitness and the usual menu of macho behavioral traits, his childhood can be lonely, with little or no hope for the future. For such boys the benefits of further education, often the key to success, is not an option. They face lives as an anonymous farm worker or a laborer at construction sites. For these boys, joining the world of the Katoey is an escape from poverty and obscurity.

Our friend Sunny, once the top fashion model in the world, told us Galliano is known to have used katoeys on the catwalk at his shows. And he is not alone. Couture designers recognize a perfect hanger for their threads when they see one: a number of lady boys are blessed with long legs, broad shoulders, great (manufactured) boobs, small hips – and attitude for days. In other words, they are perfect models.

Even the denizens of the obscure cafe tucked at the back of the market were having a ball strutting their stuff on stage, lip syncing the life fantastic, while climbing up the social ladder one (fake) Manolo at at time.