The Groove Abides: Head For The Hills, Moon Saloon, 1/23 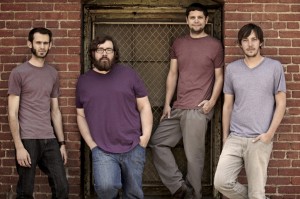 Head for the Hills

The sounds of banjo notes cascading like Ingram Falls in June and the steady chuck-chuck of a mandolin, overlaid with shimmering harmonies is the sound of summer in Telluride. The valley’s biggest Gathering of the Tarp People, the Telluride Bluegrass Festival, has married bluegrass music with summertime as surely as hummingbirds and lemonade.

So, when a top-flight bluegrass band like Head For the Hills makes a cold weather foray into town, the memories of bare feet, hot sun and cold beer come flooding back in an embrace as warm as a down jacket. When that band is ensconced in the cozy confines of the Fly Me to the Moon, heat and happiness is guaranteed. Head For the Hills plays this Thursday, January 23 at 10 p.m.

The Colorado quartet has been enjoying a surge in well-deserved popularity, and have become fixtures on the festival circuit – including the Telluride Bluegrass Festival – where their progressive approach to acoustic music has been earning them raves from critics, fellow musicians and legions of fans. The band – guitarist/vocalist Adam Kinghor, Joe Lessard on violin and vocals, Matt Loewen, upright bass and vocals and Mike Chappell on acoustic and electric mandolins – recently released their fourth record, Blue Ruin, a revelatory take on the state of modern bluegrass music that brings the band’s disparate influences together in one mighty recording. Original compositions display a maturing, musically adventurous band in its ascendancy.

That pretty much nails it.

Here in Colorado, where bluegrass and acoustic music reign over the state, and seemingly everyone knows someone in a bluegrass band, rising to the top is quite a feat. Through hard work, relentless touring and thrilling execution, Head For the Hills has done just that, landing gigs on E-Town, NPR and at South By Southwest. They’ve walked among giants, including a gig this week opening for Railroad Earth at the Fillmore in Denver. Their playing is mind-blowing and tight, and their improvisations will have you throwing your hands in the air and howling at the moon.

This is a hootenanny you won’t want to miss.

Tickets will be available at the door or in advance at Wizard Entertainment. Doors at 8 p.m., show at 10 p.m.

The Moon is located at 136 East Colorado Avenue.

Head For the Hills has a fabulous web page. Go to: www.headforthehillsmusic.com and explore audio or video evidence of their mastery, and check out the cool photo of the band performing on the Fred Shellman stage in Town Park.

Freelance Writer at Freelance Writer
Suzanne Cheavens is a writer, poet, songwriter, and editor who out down roots in the Telluride valley in 1985. The mountains have been a fertile ground for her literary, musical, and theatrical endeavors, all of which she manages to do often at once. Married with two grown children and a grandson, she delights in the natural world, the longevity of her favorite guitarist, Keith Richards, the dance of the written word, and the allure of the Dionysian arts.