TIO NYC: "The Heir Apparent," By Way Of David Ives

Master wordsmith David Ives is probably best known for his evenings of one-act comedies,  All In The Timing and Time Flies. All In The Timing won the Outer Critics Circle Playwriting Award, ran for two years Off-Broadway, and in the 1995-96 season, was the most performed play in the country after Shakespeare productions. Ives’s full-length plays include Venus In Fur, which enjoyed vast critical and audience success off and on Broadway, opens its Denver run at the Curious Theatre on Saturday, May 3. The New York production of Ives’s literate, funny, stylish, over-the-top farce, The Heir Apparent, (adapted from a play written in 1708 by Jean-François Regnard), is now playing to sold-out houses at the Classic Stage Company, 136 East 13th Street, East Village; 212-352-3101, classicstage.org. (through May 4).

We were privileged (and delighted) to be in the audience when David Ives talked  about the play, which he “translapted” (translated and adapted, his word) from the French –after about 1 1/2 of college French and about a year in Paris living with a girlfriend.

“My 17th-century French is just amazing,” he said. “But don’t ask me to go around the corner and buy a baguette.”

In a digestible sound byte, Heir Apparent is a latter-day sitcom all dressed up in satin and velvet, with the requisite “high level thinking and low level pain.”  Ives goes on to say in summary: “The play accepts the world as it is.”

Warts, wigs, and all.

To add to the fun, Ives wrote The Heir Apparent in iambic pentameter (rhyming couplets). This amounts to a theatrical version of the game catch-the-hot-potato between the actors, which makes the audience lean in so as not to miss the word play within the play and the actors step up.  Because, well, it is all in the timing. Here’s one shining example: “Her note was sweet, but could this girl be gaucher?” Geronte asks, to which Lisette replies, “I’ll tell you this: She isn’t strictly kosher.”

Critics are raving about The Heir Apparent:

“A COMIC MARVEL!
When rusting classics need repolished lives,
Is anyone more fit than David Ives?
Go see the play and you’ll surely concur
This Heir Apparent is a FARCE MAJEURE!”
– Time Out New York

The following review by Charles Isherwood appeared in the New York Times.

He’s Old, Rich and Dying, and Wants His Nephew’s Girl

This place is fun! A wondrous mess! I wish my every day knew such excess!”

Thus exults a sour (and very tiny) lawyer in “The Heir Apparent,” David Ives’s adaptation of a little-known 18th-century French comedy by Jean-François Regnard that opened on Wednesday at the Classic Stage Company. Given that this fellow, played with simpering style by David Pittu, has been hoodwinked, humiliated, repeatedly mocked for his diminutive size and generally abused, his outburst may seem surprising. 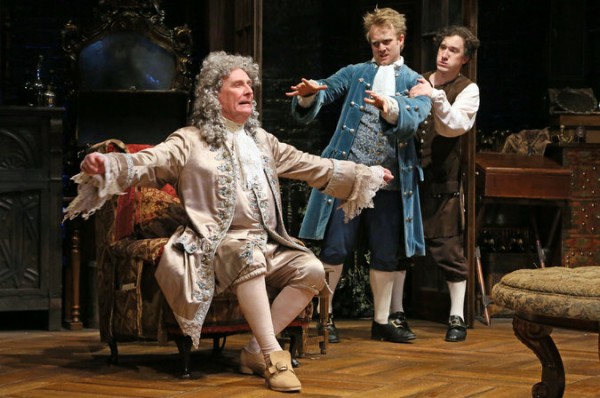 And yet we in the audience are likely to be smiling in giddy sympathy. This boisterous, bawdy and endlessly funny production, written entirely in rhymed verse and directed with meticulous abandon by John Rando, should put a spring in the step of even those of us beginning to dodder and wilt under the annual end-of-season theater blitz. It is indeed excessively good.

Mr. Ives, the author of Broadway’s kitten-with-a-whip comedy “Venus in Fur,” has begun a profitable sideline in sprucing up plays from the French classical era. His “School for Lies,” a loose adaptation of Molière’s “The Misanthrope,” was previously seen at the same theater. For the new romp, he has turned to a late play from the lesser-known Regnard (1655-1709), but there’s much here that recalls the familiar comic types whose roots are in commedia dell’arte: an avaricious older man ripe for being duped, scheming servants coming to the aid of a couple of young sweethearts desperate to marry. Regnard swiped liberally from situations in both Molière’s “The Miser” and “The Imaginary Invalid,” but his style is less satirical and more akin to a raucous, ribald hell-for-leather farce.

The title character is the dashing young Eraste (Dave Quay), a nephew of the effusively ailing and spectacularly rich Geronte (Paxton Whitehead). Eraste has been cultivating his elderly uncle’s affections for some time. Geronte’s death appears nearer with every revolting expectoration and race to purge his heaving bowels. (This is not a play for those allergic to scatological references, gilt-framed though they are in dainty rhymed couplets; even the clock on John Lee Beatty’s elegant set chimes flatulently.)

Naturally, Eraste believes he will soon have his hands on his uncle’s million francs…