Jonathan Franzen is the author of four novels: “Freedom,”  “The Corrections,” “Strong Motion” and “The Twenty-Seventh City” – two collections of essays –”Farther Away,” “How to Be Alone” – a personal history –”The Discomfort Zone” – and a translation of Frank Wedekind’s “Spring Awakening.”

And now and again, Franzen writes for The New Yorker magazine – such as the time in 2010 when he wrote a story about the annual decimation of migratory birds by hunters and poachers in southern Europe.

To build his case, Franzen, a longtime bird lover, accompanied members of the German bird-protection organization, the Committee Against Bird Slaughter (CABS), as they challenged songbird trapping operations in Cyprus.

Caviar on the wing, blackcaps, one of Europe’s most common warblers, are the traditional national delicacy on Cyprus, where they’re known as ambelopoulia. They are the main target of Cypriot trappers, but catch of other species is also enormous: rare shrikes, other warblers, larger birds like cuckoos and golden orioles, even small owls and hawks. On the island, all forms of songbird trapping have been criminal offenses since 1974. By the mid-1990s, as many as 10 million songbirds a year were being killed in Cyprus.

For the article, Franzen traveled to Malta, the most savagely bird-hostile place in Europe. The Maltese shoot bee-eaters, hoopoes, golden orioles, shearwaters, storks, and herons. Maltese hunters, who argue that the country is too small to make a meaningful dent in European bird populations, fiercely resent what they see as foreign interference on their turf, which amounts to slaughtering these globe-flying wonders for large sums on the black market.

It is impossible to know exactly how many birds are shot in Italy, the above estimate is a good guess, but for sure the country is a crucial migratory flyway. Banded birds have been recovered there from every country in Europe, 38 countries in Africa, and six in Asia. 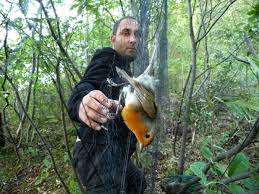 Co-directed and produced by Roger Kass, whose brother Douglas directs, “Emptying the Skies” is based on Franzen’s essay and follows a squad of pan-European bird-lovers –  Andrea, Piero and Sergio – who risk their lives waging a secret war against hostile poachers, disrupting illegal trapping and freeing as many birds as possible. (In southern Europe, police reinforcement is virtually non-existent.) It affirms the fact that a bird in hand is definitely worth two on a restaurant menu.

The documentary screens at Mountainfilm in Telluride at The Nugget on Saturday night, 8:30 p.m. and on Sunday at 11:45 a.m. at The Palm.

To tell the celluloid version of Franzen’s article, the Kass brothers interviewed the author, along with members of other anti-trapping organizations such as BirdLife Cyprus, but focuses mostly on the brave actions of three men.

Franzen himself (who is also the executive producer of the project) joins them on one of their forays, but after a dangerous run-in with Cypriot farmers, calls his Italian compatriots “half-crazy” for undertaking the task.

Critics (and Mountainfilm festival director David Holbrooke) praise the film, describing it as a very touching portrayal of the hard work these unsung crusaders do in their spare time to enforce a law that is ignored in the name of tradition, and more shockingly, of underground criminal activity. 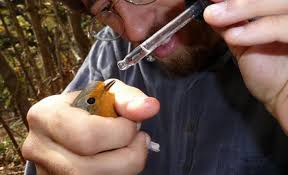 To learn more, click the “play” button and listen to my conversation with Doug Kass.