“Copenhagen,” a play by Michael Frayn, is about a meeting between two people in 1941 that held major implications for the course of events during World War II. 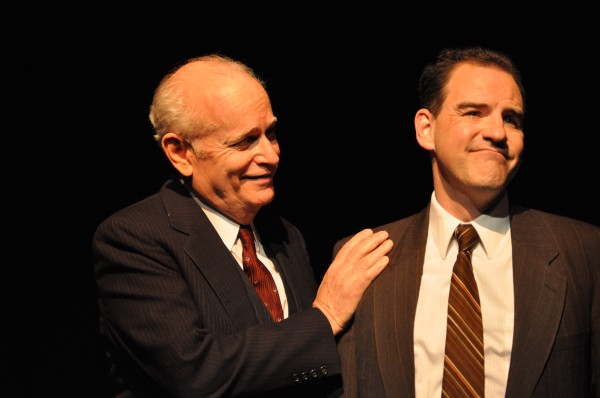 That the meeting happened is clear. But what led up to it? And what happened during the actual exchange between Danish physicist Niels Bohr and German physicist Werner Heiseinberg?

“Copenhagen” ponders these questions—the source of some debate to this day among historians—and they are not unimportant.

There are several wonderful ironies embedded in the play, but here are two:

First, that the two people involved were award-winning scientists with the intellectual ability to probe the most fundamental level of existence—the atom and its parts, invisible to the eye—and yet they couldn’t fully comprehend a moment in time (that they both witnessed in person).

Second, that the two award-winning scientists held the joint intellect to develop an explosive device capable of catastrophic consequences yet their decisions and actions revolved around terribly human functions beyond the realm of science—loyalty, kinship, brotherhood and morality. They know each other’s weaknesses as scientists—and as people. The course of the war comes down to the emotional connections these two have forged as friends and colleagues over the decades leading up to this dicey, unclear meeting.

“Copenhagen” considers various scenarios for what “really” happened. Or didn’t. “What if’s” abound. “Copenhagen” is pure back-story. There is no “now,” only memories being replayed. The scenarios are recounted by the spirits of Bohr and Heisenberg and then we are given glimpses of the possible “real” exchanges. The script is neatly interwoven and it’s no wonder the play had strong runs in London and New York and picked up many awards along the way.

At the modest John Hand Theater, located on the Colorado Free University campus on the Lowry redevelopment in east Denver, the current run of “Copenhagen” is a thinking playgoer’s dream. It’s chock full of history, science, theology and humanity. A strong dose of pre-theater caffeine is recommended solely to ensure you are ready for an intense and layered experience that lives primarily in the head and ever so briefly, when those moments happen, smack in the heart. The underlying issue might be World War II, but this isn’t “The Sound of Music”; it’s the sound of three people talking. The set is the definition of spare, vacuum-esque; there is nothing to distract from the three neutrons bouncing around in their black bubble.

The cast is energetic and pointed, spot-on. Wes Munsil (Niels Bohr), Marc Graham (Werner Heisenberg) and Anne Smith Myers (playing Niels’ wife, Margrethe Bohr) are on stage for nearly three hours (with one intermission) and the lines fly along, mostly staccato exchanges as they prod each other to dig in and try to recall what happened—and why. Timing is key and these three click. The play is demanding and, with only three actors to share the wealth (load), hats off to this trio and director Bernie Cardell for guiding us through so much information with a crackling edge. 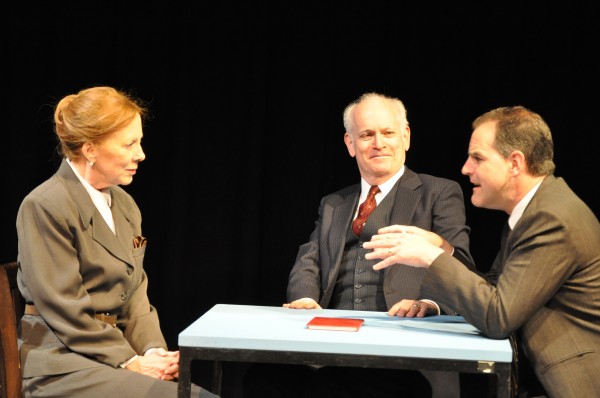 A fundamental understanding of physics would likely add to the enjoyment of watching “Copenhagen,” but Bohr’s repeated insistance on “plain language” to describe the inner workings of the atom helps bring us non-scientists along for the ride. No matter your level of knowledge about fission or subatomic matter, you’ll leave with an unsettling feeling that the future is as uncertain as the past.

Final note: Fans of “Breaking Bad” who want to enhance the next rewind of the series can use “Copenhagen” to brush up on their history of Werner Heisenberg. Though the application of the Uncertainty Principle long ago shifted away from the study of matter (or so I’m told), “Copenhagen” wrestles with the same moral-compass questions that made Walter White such a fascinating character, particularly when he donned the Heisenberg moniker as his meth business ballooned and then went global. Is any action justified if you’re doing it for your family—or your country? 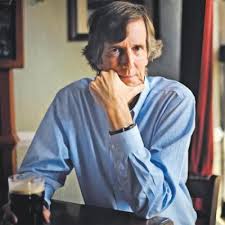 Editor’s note: Telluride Inside… and Out’s monthly (more or less) column, Tall Tales, is so named because contributor Mark Stevens is one long drink of water. He is also long on talent. Mark was raised in Massachusetts. He’s been a Coloradoan since 1980. He’s worked as a print reporter, national news television producer, and school district communicator. He’s now working in the new economy and listed under “s” for self-employed. Mark has published two Colorado-based mysteries, “Antler Dust” (2007) and “Buried by the Roan” (2011). Midnight Ink will publish the third book, “Trapline,” in the fall of 2014 and is under contract for a fourth book in the series, too. For more about Mark, check out his website.