Denise Mongan of Beyond the Groove has three great nights of music planned for Club Red, an intimate pop up venue inside the Telluride Conference Center, Mountain Village. 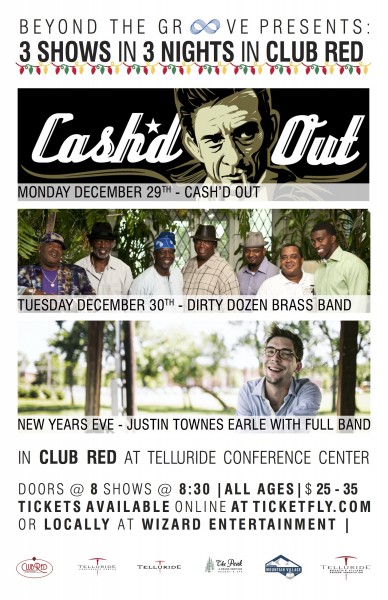 Monday, December 29, Cash’d Out pays tribute to the music of The Man in Black, aka, Johnny Cash.

Sandwiched in between, on Tuesday, December 30, Dirty Dozen Brass Band is scheduled to shake up your world with their crisp, hip brass band sound, laced with funk and modern jazz. 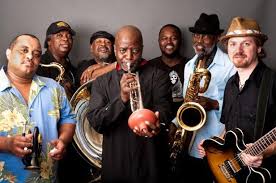 It’s been 35 years since they first performed, incorporating funk and bebop into the traditional New Orleans jazz style. Today, the Dirty Dozen Brass Band is a world-famous music machine, whose name is synonymous with genre-bending romps and high-octane performances.

“It ends up being like a pot of gumbo – you drop in a little okra, drop in a little shrimp, you drop in some crabs. Before you know it, you’ve mixed in all these different ingredients and you’ve got a beautiful soup. That was our approach to music early on and it still is today,” says trumpet player Gregory Davis about the band’s style.

Baritone sax player Roger Lewis — who, like Davis, has been with the combo since its inception in 1977 — echoes that sentiment:

“It’s a big old musical gumbo, and that probably made the difference, separating us from other brass bands out of New Orleans. It put a different twist on the music. We were not trying to change anything, we were just playing the music we wanted to play and not stay in one particular bag.”

Davis further explains in greater detail what DDBB is all about:

“We’ve never been the norm, even though we started out as a traditional New Orleans brass band. In the beginning we weren’t getting work of any kind, so we thought it was okay to explore other music. That allowed us as individuals to bring ourselves into the rehearsals and that’s where we started to experiment. At the time the band started, I was a student at Loyola University and we were all being introduced to other music – to jazz from the twentieth century and so on. It’s impossible to think that you can be exposed to the harmonies that Duke Ellington was making, the rhythms coming from Dizzy Gillespie or the funk being done by James Brown, and then ignore it when you’re playing New Orleans music. New Orleans music is all of that. If we had chosen to just put in the music presented to us then as traditional, it would have stunted our growth. Being more than what we heard is what the band was about.”

Bottom line: The Dirty Dozen Brass Band revitalized the brass band in New Orleans and around the world, progressing from local parties, clubs, baseball games and festivals in their early years to touring nearly constantly in the U.S. and in over 30 other countries on five continents.

About Beyond The Groove:

Her first show at Club Red was in March 2014, Blitzen Trapper. Since then she has produced Deer Tick, Matisyahu, Cash’d Out with upcoming shows including Lettuce in Feb 2015.

Denise has worked in the Music business for almost 30 years and is thrilled to now have the opportunity to living her passion producing live shows.

Stashed among the highest concentration of 13,000 & 14,000 foot peaks in North America, Telluride offers some of the most spectacular skiing and riding on the planet. Unique culinary experiences on the mountain blend with the world-class restaurants, sophisticated shops, luxury hotels, and exquisite spas Telluride offers. Plus, getting here is easier than ever with non-stop flights from 8 major hubs, and getting around is a breeze with the free gondola transportation system. Discover why Telluride is The Most Beautiful Place You’ll Ever Ski.