Film Fest’s Sunday At The Palm: "A Letter To Momo"

The Telluride Film Festival presents a not-to-be-missed Japanese animated masterpiece at this month’s free community “Sunday at the Palm” screening. Hiroyuki Okiura’s “A LETTER TO MOMO” was hailed as “stunning!” by Variety, and is made possible in part by New York-based distributors, GKids, who work with the Telluride Film Festival to bring the most innovative children’s films to the region throughout the year. 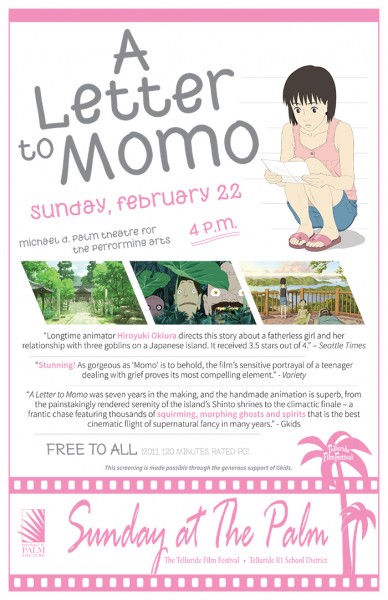 The film tells the story of Momo, an eleven-year-old girl who finds herself embarking on a new life adventure after the death of her father. She and her mother move from Tokyo to the beautiful small island of Shio, where her mother grew up.  They go to live with Momo’s great aunt and uncle, who give her secret access to their “attic,” full of mysterious ancient books about mythical and fantastical creatures. When Momo opens one of the books, she releases the ancient spirits. At first frightened by the unlikely goblins, Momo soon learns that they are her protectors and friends – and that the veil between this world and the next is more transparent than she ever could have imagined.

A beautiful tale of love, family and friendship for the whole family. “A LETTER TO MOMO” was seven years in the making.“The handmade animation is superb, from the painstakingly rendered serenity of the island’s Shinto shrines to the climactic finale,” wrote GKids, “The best cinematic flight of supernatural fancy in many years.”

For a preview of the show, watch this video: