Note: This is the first of what we hope will be a series of posts and images by long-time local Ingrid Lundahl, author of “Telluride: The Outlaw Spirit of a Colorado Town.” Most know Ingrid as a talented photographer, but she started out in the professional world as a writer. (For more on Ingrid and how to buy the book, see below.) This Ski Burn post is about a recent pagan ritual held on Valentine’s Day (a holiday born of pagan times) in a desperate attempt on the part of two constituencies to bring on the powder: Telluride locals and Quentin Tarantino’s team of movie makers and stars. Ingrid wrote the blog just as the god, you guessed it, answered our plea. OMG, The Burn worked. It finally snowed !!!!

Actor Samuel L. Jackson, of Tarantino’s “Hateful Eight” movie being filmed outside Telluride, slams his ski into the Cauldron of Fire. Actor Michael Madsen looks on. By Ingrid Lundahl.

We have a common quest, the town and the movie people. We need snow. A blizzard, to be exact. Last Saturday, Valentines Day, hearty and vocal townsfolk melded around the Elks Park bonfire with the cast and crew of Quentin Tarantino’s “Hateful Eight,” the production of which is somewhat stalled high in the San Juans due to a lack of dumpage.

Rumor has it the bulk of the movie is to be shot outside Telluride during a blizzard. The scenario is inside a stagecoach full of folks caught in a blizzard. I guess folks can get hateful in such a situation. We’ll have to wait and see what Quentin has written and will eventually mold into a major production.

The lusty and epic Ski Burn was not only Town of Telluride sanctioned, it was Town of Telluride inspired. Town Manager Greg Clifton fashioned wood pieces into ski shapes by his own hand. He and Mayor Fraser, Parks & Rec, the Fire District and various other entities created The Burn in less than week, and invited the “Hateful Eight” cast and crew to join in the ritual.

It was not the first ski burn this town has experienced. Oh no. There have been quite a few torchings over the decades, in particular, the 1980’s, when toxins spewed forth into the night air. Skis were used then, real skis, and TV’s and whatever was loose and could be thrown into the blaze. 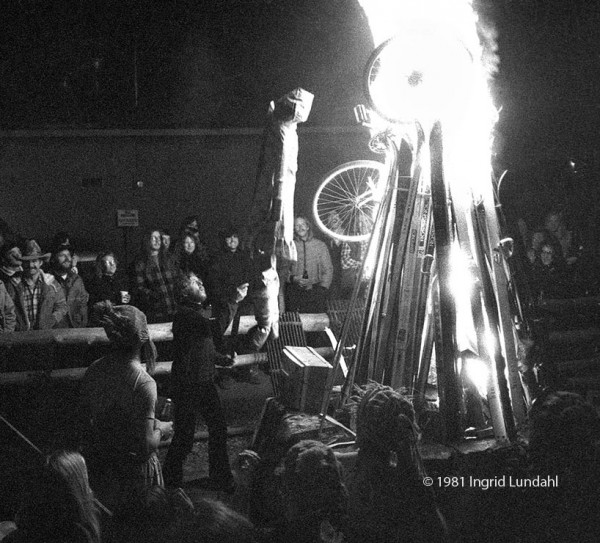 The Flying Epoxy Sisters host a ski sacrifice on the Old Roma patio in 1981. Here, Edith Epoxy, “Telluride’s only virgin,” is being consigned to the flames. The image is featured in Ingrid’s Outlaw Book.

Usually we got results in the old days once the Snow God was invoked, even if it was just a dusting. This time, the wooden ski shapes were free of toxins. Politically correct. We’ll see if there are results. At least it’s clouding up, after weeks of May-type weather, lovely but spooky.

Ullr, an ancient Norse god, as interpreted by local actor Ashley Boling, appeared at the bonfire with his bad broken English and Viking hornage atop his head. He interacted with Mayor Stu Fraser and with Samuel L Jackson. Soon thereafter, Jackson hurled his ski into the blaze, invoking, in his signature raw language, the Snow God to deliver. Tarantino, too, held his ski aloft before launching it into the burning pot.

Actor Michael Madsen and the movie’s producer, Shannon McIntosh, also hurled their pieces of wood into the crackling blaze. So did actor Kurt Russell and the movie’s DP, Robert Richardson. With his long white, unruly hair, Richardson looked like a mad wizard performing a pagan rite…

…which indeed is what it was, being an event much in keeping with the outlaw spirit of Telluride.

Hey, I just looked at the window. It’s less than two days after the bonfire. It’s snowing. Ah, the power of the pagan rite. 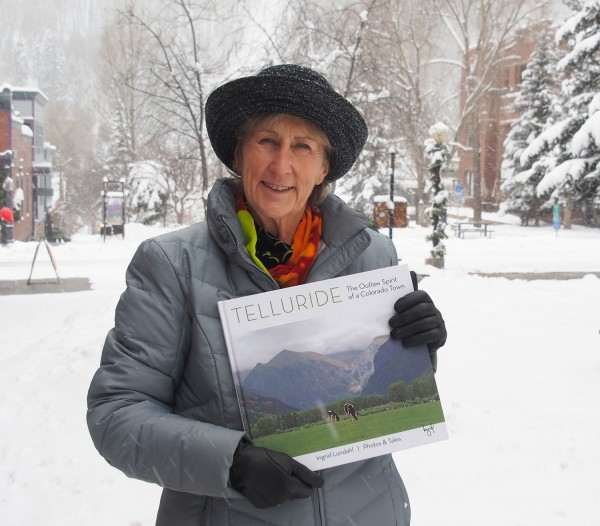 Ingrid Lundahl, a Telluride homegrown photographer since 1978, launched her art/history/photo/fun book, “TELLURIDE | The Outlaw Spirit of a Colorado Town, in 2014.” It celebrates the wild energy of Telluride and is the talk of the town. Some of the chapters are: OUTLAWS, SALOONS, WILD WOMEN, FILM, BLUEGRASS, THE MOUNTAIN. You can buy this light-hearted history book on her website: ingridlundahl.com and at various bookstores across Colorado, most especially Telluride’s Between the Covers bookstore in the heart of downtown, and also at: between-the-covers.com.The book is also available at Telluride Naturals Gift Shop in Mountain Village.

Ingrid was a writer before she dropped out of the corporate advertising world in the 1970’s to move to Telluride. Creating the Outlaw book has kicked her writing muse into action, and thus has been birthed this column, Outing the Outlaw Spirit.