Sandy Skoglund creates subversive room-size installations such as “Radioactive Cats” (1980), a post-nuclear tableau starring a swarm of eerie chartreuse felines, which have invaded the drab gray kitchen (and drab gray lives) of an elderly Midwestern couple. 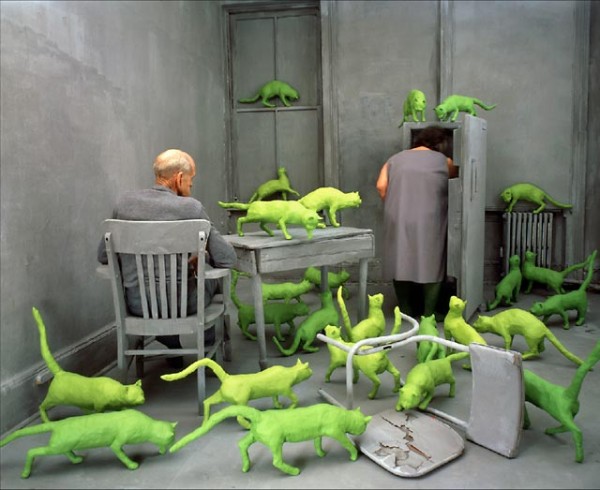 Skoglund’s “The Grey Foxes” has a pack of animals wreaking havoc in an all-red restaurant or cafe from hell. That fine example of staged photography – Skoglund is an innovator in the genre – was originally exhibited at the Centre Pompidou in Paris. Today this installation is part of the Denver Art Museum’s permanent collection.

“Foxes don’t belong in a restaurant, but they would come in and leap from tables to chairs just as they’re doing in the photograph.They don’t see them as tables and chairs,” the artist was quoted as saying in one online source. 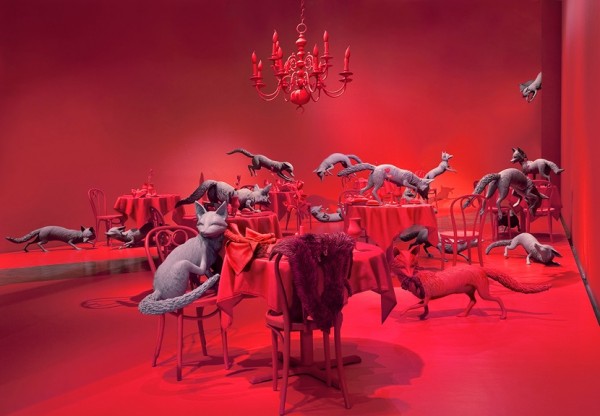 Examples of unsettling fantasies such as these, combinations of installation art, tableau and sculpture, all products of a fecund imagination, kick off the 30th anniversary celebration at the Telluride Gallery of Fine Art. (Skoglund’s last solo show at the Gallery was in 2001.) The show opens Thursday, March 5, with Telluride Arts’ First Thursday Art Walk, a celebration of creativity in downtown Telluride and a meet-and-greet for art lovers, community and friends.

Sandy Skoglund was born in Weymouth, Massachusetts in 1946. She studied studio art and art history at Smith College in Northampton, Massachusetts from 1964-1968. Skoglund went on to graduate school at the University of Iowa in 1969, where she delved into filmmaking, intaglio printmaking, and multimedia art, receiving her M.A. in 1971 and her M.F.A. in painting in 1972.

Skoglund moved to New York City in 1972, where she started working as a conceptual artist, trading in repetitive, process-oriented art production through the techniques of mark-making and photocopying.

In the late 1970s, Skoglund’s desire to document conceptual ideas led to teaching herself photography. That developing interest in photographic technique became fused with her interest in popular culture and commercial picture-making strategies, resulting in the directorial tableau work she is known for today.

A review in The New York Times sums up Skoglund’s influences:

“(She) seems inspired as Pop artists were by the whole kitsch and caboodle of American low culture: science fiction and horror movies, comic animations, shrilly colored signs and packaged products, television commercials, fast-food parlors, dumb-dumb ad repetitions, glitzy malls and the general Disneyfication of the landscape, physical and psychic. The difference between her work and Pop, however, is that where Pop ran to blandness, hers is infused with wit and nightmare,” wrote one critic. 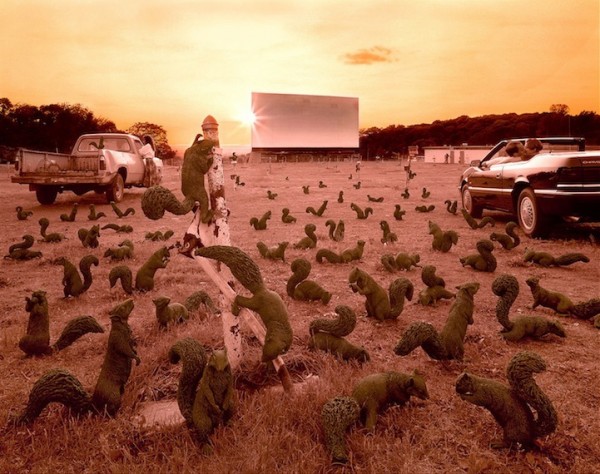 Skoglund’s work recalls the dark and unsettling Surrealist dreamscapes of the 1930s; the Theatre of the Absurd of the 1950s; and the ironic room installations of world-famous 1960s artists such as Claes Oldenburg.

The artist has been known to sum up what she creates as “theme park,” those massive installations, colorful sculpture (she fashions all the critters that populate her work) and photography that juxtapose the mundane with repetitious, out-of-place figures to create dramatic tension in an alternate reality.

The Telluride Gallery of Fine Art features Skoglund through March.

Remember the famous Warhol quip about how everyone sooner or later would enjoy 15 minutes of fame? For selected regional artists, the Ah Haa School for the Arts will expand those 15 minutes to the entire month of March with its 2nd annual show of regional art. 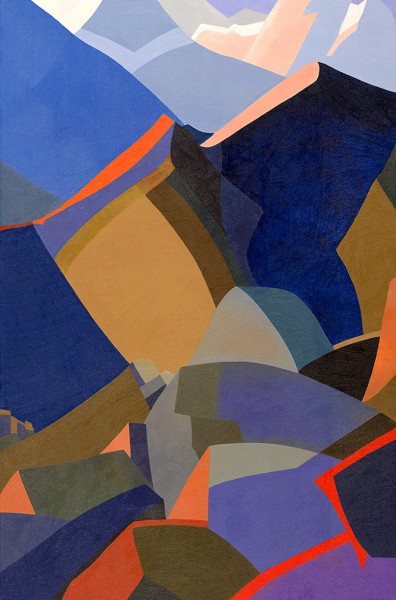 “The work was very strong and quite diverse this year,” said Ah Haa director Judy Kohin, noting that Silverman had a difficult time narrowing her selections down from a field of over 170 submissions. “I’m thrilled with the turnout of artists who applied. It’s a fantastic exhibition that shows the talent and diversity of our regional artists.” 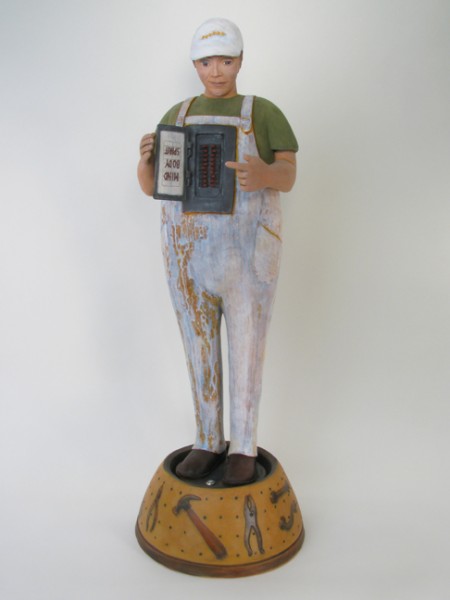 A few of the artists selected are familiar names: Karen Wilcox, Eileen Benjamin, Kathryn Tatum, Diedre Krois, Julie McNair, Ann Cheeks, Daniel Kanow, and Rob Schultheis, among others. But there are many more emerging artists sharing their work with Telluride, some for the very first time. 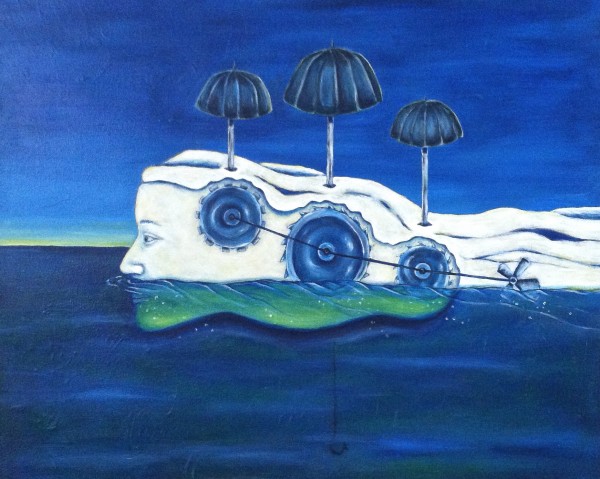 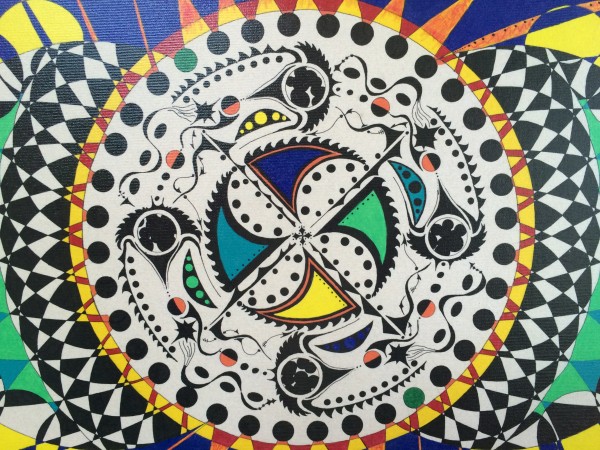 Smolen has worked as a small-animal veterinarian, practicing emergency medicine and critical care for people’s beloved pets for the past decade. He has also been making art his whole life, believing that art is a form of love that can be expressed by everyone. Combining the art of medicine  with the art of life, Smolen’s work resonates with color and symmetry. In his mandala mindscapes, fashioned with colored pencil, ink, paint and oil, his focus is on imagery that reflects the sun.

The legacy of Ah Haa is also on display at Baked in Telluride, paintings by Janna Welborn, Ilene Kramer, and Amy Cannon, students of artist and Ah Haa board member Robert Weatherford, also part of the Telluride Gallery of Fine Art stable, from his celebrated class, “Painting from Within.” (While there, ask for your 10% Art Walk discount.) 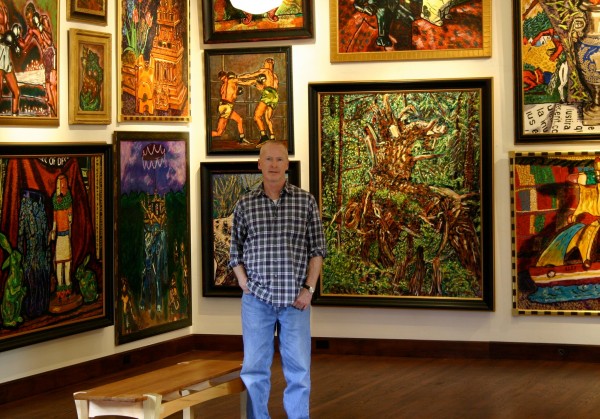 Ah Haa instructor and renowned artist Robert Weatherford in his studio. A few of Weatherford’s many disciples show their work at Baked in Telluride.

Russell’s show, A Wave in the Mind, consists of large abstract paintings and sculptural installation. The title is based on a Virginia Woolf quote: “A sight, an emotion, creates this wave in the mind, long before it makes words to fit it.”

Russell has long been interested in the subtle dance between control and spontaneity. Process is high on her list of priorities, developing a method that accommodates both planning and risk. Movement, energy, and gestural marks all play into the emotive qualities of the work. Layering in the work comments on history, materiality, and depth. 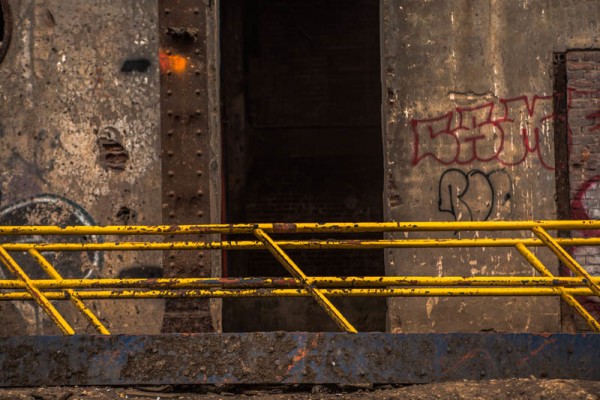 Originally from Adelaide, South Australia, Nicko Ferguson started his photography career shooting images of his friends and travels. Now Tellruide is home base, where spilts his time between snowboarding, Bootdoctor’s, and shooting events such as Telluride Aids Benefit (TAB) and intimate boudoir portraits.

For more about what’s happening and where for the March 2015 Art Walk, visit Telluride Arts here.

About the Telluride Arts District: 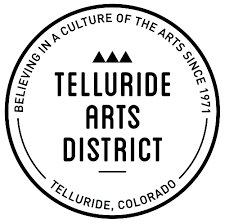 Art Walk is an initiative of the Telluride Arts District, a Colorado Certified Creative District, www.TellurideArts.org

The Telluride Arts District is a Colorado Certified Creative District, and works in partnership with the Town of Telluride, Colorado Creative Industries, and the National Endowment for the Arts.