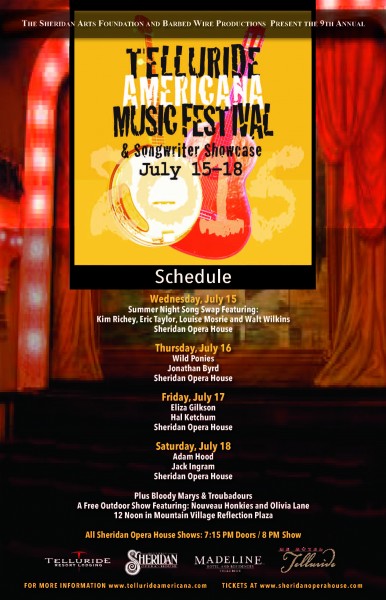 “The term Americana is often used to describe the intersection of folk, country, and blues,” said Steve Stagner, who along with Sheridan Arts Foundation produces the event. “But over the years we have gravitated more and more to the singer-songwriter-storyteller tradition. This lineup certainly reflects that focus.”

Offering dead right, honest songwriting delivered in a hauntingly beautiful and gritty neo-traditional Americana wrapper, Wild Ponies takes all the rich detail and narrative of Doug and Telisha’s earlier work and adds a sonic right fist. Quick wit and fearless delivery make every show stunning and personal. Touring in support of their release on Ditch Dog Records, Things That Used To Shine, Wild Ponies – Doug and Telisha Williams with drummer Jake Winebrenner – bring energy and charisma along as they perform brilliant new songs as well as some of the old Doug & Telisha favorites.

For an example of Wild Ponies in performance, watch this video:

Byrd is a preacher’s son, a Gulf War veteran, and a Kerrville New Folk award-winner from seven generations of North Carolinians. A Jonathan Byrd show is musical theater, bringing together the Texas songwriting tradition with southern storytelling and hot guitar picking in the line of North Carolina greats Doc Watson and Tony Rice.

For a preview of Byrd in performance, watch here:

Friday brings together two Austin-area masters – Hal Ketchum, a classic Texas troubadour, and Eliza Gilkyson, one of the most respected voices in folk and Americana music.

Gilkyson is in concert in support of her new Red House Records release, The Nocturne Diaries, the first new album in three years from Grammy-nominated, Austin Music Hall of Fame member. Produced and recorded in her hometown of Austin with her son, Cisco Ryder, The Nocturne Diaries is a restless contemplative work inspired by the converging forces of her highest hopes and darkest fears. The songs range from roots rockers to a haunting version of the folk classic “Fast Freight” written by her father, Terry Gilkyson.

Never one to shy away from politics and social issues, she writes about an adolescent on the verge of a rampage (“An American Boy”) and looks through the eyes of an abused teenage girl (“Not My Home”) with the characteristic empathy and insight that have made her one of the most beloved folk artists today. “The Red Rose and the Thorn” features her first big electric guitar solo ever, set up beautifully by world class Hammond B3 player Ian McLagan and bassist Chris Maresh (Eric Johnson). She closes the album on a hopeful note with the intimate “All Right Here,” a gentle ballad about finding the most valuable things close at hand in family and home.

Expect to hear many of those tracks at her Telluride appearance. 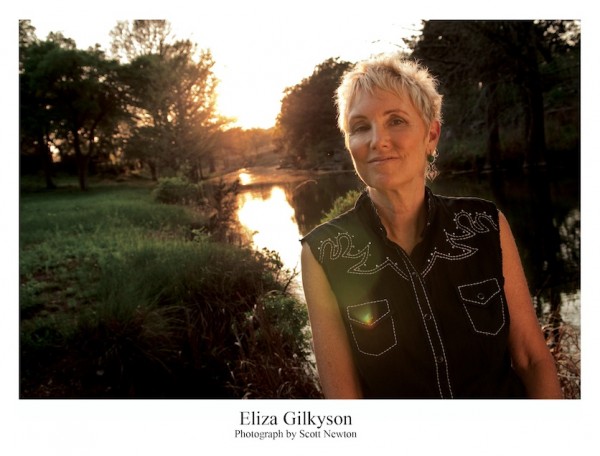 Over her decades-long career, Gilkyson appeared on NPR, Austin City Limits, Mountain Stage, eTown, Sirius XM Radio and more and her haunting, thought-provoking songs have been covered by such notables as Joan Baez,  Bob Geldof, Tom Rush, and Rosanne Cash. The song “Requiem,” originally written for the Asian tsunami victims, has become a choral standard and is used as a spiritual prayer by churches and communities worldwide, notably the choral group Conspirare. (Their album with the song was nominated for two Grammys.)

“The songs that come in the night are very different than the daylight songs,” she says of the collection. “Usually the big themes crop up in the dark —  thoughts of mortality, the state of the world, the plight of mankind, one’s failures, losses and fears — the things we are all too distracted to notice during the day.  But the backdrop of shadows also can highlight the faces of the loving people who share your life with you, who care about the world, nature and humanity, who keep the fires of hope, humor and hearth burning bright in this time, who make your life meaningful and worthy of your best intentions.”

Musically rich and lyrically thought-provoking, The Nocturne Diaries is a journey through the dark night of the soul that ends at the light of dawn with a sense of gratitude, a renewed commitment to care, and a stubborn little ray of hope.

On the final day of Americana Music Fest, the headliner is Academy of Country Music award-winner Jack Ingram, who will play a solo acoustic show, and Adam Hood, an Alabaman who mixes storyteller folk with roadhouse shuffles.

The Wednesday night show is available separately for $35.