The 35th annual Telluride Mushroom Festival – Thursday, August 13 – Sunday, August 16, 2015 – with pre-conference workshops, Wednesday, August 12. Festival celebrates multiple uses of all things fungi. This year, the event is being held at the historic Sheridan Opera House, so seats are limited. If you plan to attend lectures, go on a foray, and enjoy the culinary cook-off, it is best to purchase a full festival pass. Single lecture tickets are available for lectures at the historic Sheridan Opera House for only $25, space available. To go on a single foray, you can purchase a pass for $25. Cook-off tickets are available for a suggested donation of $10. Go here to purchase. 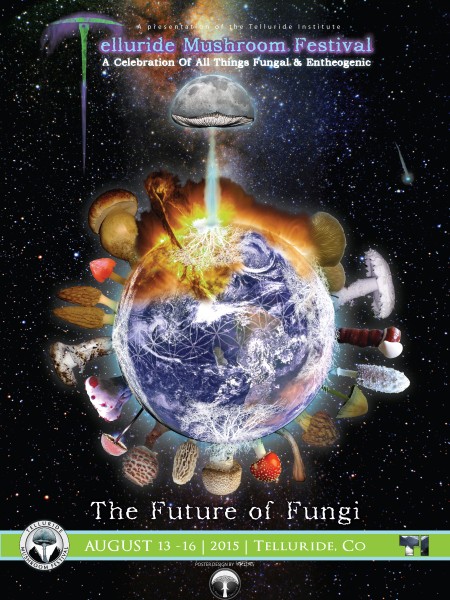 Promise, you will want to drink in all this information.

Brooding headlines and politics ad nauseum don’t change the fact that hope for the planet really does spring eternal – from under the ground up.

In the form of mycelium and their fruit – mushrooms. 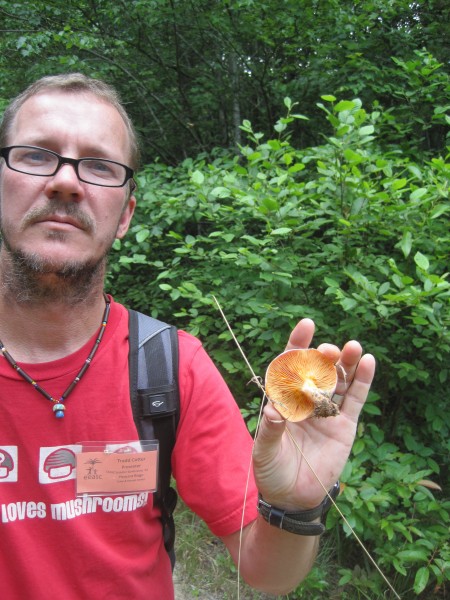 And he is a man on a mission –  “heal the people and the planet, one mushroom and one cultivator at a time, reversing destructive cycles into creative forces” – a creed in the introduction of his best-selling book, “Organic Mushroom Farming and Mycoremediation,” (which won Publishers Weekly’s Best Gardening and Craft Books of 2014. Available in town at Between the Covers Bookstore). 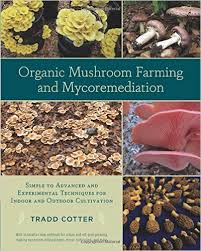 Tradd – sometimes accompanied by Olga and their 19-month-old daughter Heidi – is everywhere you want to be at this year’s gathering of the tribe, starting with his pre-conference workshop on mycoremediation.

Tradd is teaching an integrated, hands-on approach to expanding biomass, training mycelium to “eat” pollutants, constructing a table-top filtration unit for testing, controlling erosion utilizing fungi, and scaling to larger installations. The initiative will also install a small mycofilter in downtown Telluride for all to see. (Tradd us assisted by Peter McCoy of Radical Mycology, Travis Custer, Daniel Reyes, and Sam Mueller.) 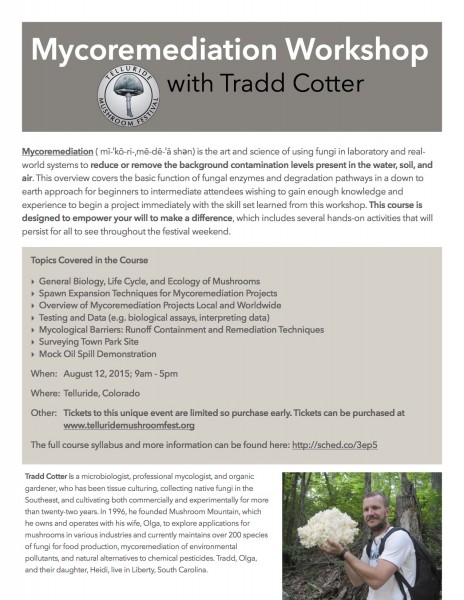 Reishi Immortal Red. For centuries the Japanese emperors sent warriors out to look for Reishi mushrooms for the royal families. A beautiful, varnished red polypore, Reishi, or Ling Chi (also known as the mushroom of immortality) is one of the most researched medicinal mushroom, its use dating back millennia. Known for its cancer-fighting properties, Reishi is also immune-modulating, regulates blood sugar for diabetic patients, and has strong anti-inflammatory properties, making it an all-round winner with a broad spectrum of health invigorating properties. Telluride Brewing Company’s redFISH Ale provides the base.

Chaga Brown Ale. Primarily a fungus that grows in large knots on Yellow Birch trees, Chaga has been used by native people all over the world where it grows. Chaga’s true colors come out of the extraction process a beautiful, luminescent yellow under UV black light. The mushroom adds a pinch of bitterness that blends well into the Magnum, Tettanger CTZ and Cascade hops brewed into three-time award-winning Telluride Brewing’s Face Down Brown, which explodes with toffee, chocolate, and nut flavors, the perfect scaffold for one of the most sought after medicinal mushrooms on the planet.

Polypore Pale Ale. Based on the foundation of Whacked Out Wheat, this light and crispy little treat is filled with a blend of medically potent polypores such as Iceman Polypore (Fomes fomentarius), Turkey Tail (Trametes versicolor), and Red Belted Conk (Fomitopsis pinicola).  These mushrooms possess natural cancer-fighting molecules, stimulating the immune system to seek and destroy non-self cells. They also contain novel metabolites that target specific human pathogens. Brewed with German Rye malt, this release has hints of spice and a warm, earthy flavor that allows the mushrooms to braid well into the matrix.

“Choosing the right brews, finding the bases that pair well with the qualities of the fungi can be challenging, but this year everything worked out perfectly,” said Tradd. “Everyone should know that all of our extraction work is done in a Level 2 laboratory under sterile conditions. And that these are the same extracts people pay big bucks for at the health store. It is just easier to relax and enjoy a beer rather than swallow undecorated medicine. And the beer really tastes great: the flavor profiles of Telluride Brewing’s award-winning formulas shine, with little or no aftertaste of the medicinals. We are working on getting growlers available as well. I thought it would be nice for folks to be able to fill up a few jugs to take home, to reminisce or share with friends and family who could not make the event, let everyone know what they missed.”

The mycobeer is also available at Friday’s cook-off. 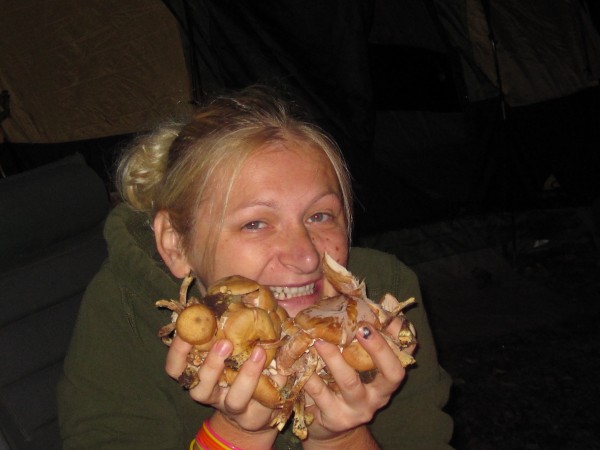 “Olga and I are making customized medicines using fungi,” explained Tradd. “These novel antibiotics can be produced and delivered almost like a vending machine within 24 hours. We have filed for patent protection and partnered with Clemson University for NIH grant proposals. They have already started trials using many species of mushrooms against MRSA (Methicillin-resistant Staph) and a new drug-resistant strain of E.coli that is becoming troublesome according to the Centers for Disease Control.”

The couple has also developed living cutting boards that incorporate naturally antibiotic mushroom mycelium into consumer materials that come into contact with food that may be infected with human pathogens.

And living bandages through a process that harvests antibiotic, high-tensile mycelium which can be grown in thin sheeting, .05mm thick with high elasticity similar to plastic.

“The substance breathes and provides natural antibiotic resistance and protection to whatever it comes into contact with, such as human skin with an infection. It has high potential for patients with severe burns.”

“These are amazing little wheels that help beginning-to-intermediate mushroom hunters and researchers, students and teachers, learn mushroom identification more rapidly and efficiently. The wheels are inexpensive and pair up with existing field guides, meaning the codes line up and give a page number for all books on the market for easy reference. Very cool.” 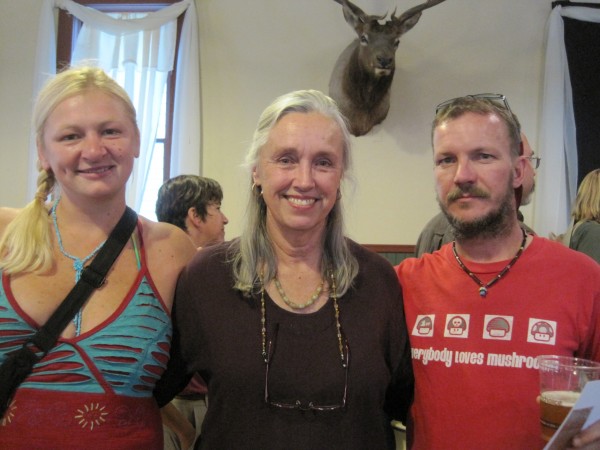 Tradd Cotter is a microbiologist, professional mycologist, and organic gardener, who has been tissue culturing, collecting native fungi in the Southeast, and cultivating both commercially and experimentally for more than 22 years. In 1996, he founded Mushroom Mountain, which he owns and operates with his wife, Olga, to explore applications for mushrooms in various industries and currently maintains over 200 species of fungi for food production, mycoremediation of environmental pollutants, and natural alternatives to chemical pesticides. His primary interest is in low-tech and no-tech cultivation strategies so that anyone can grow mushrooms on just about anything, anywhere in the world. Mushroom Mountain is currently expanding to 42,000 square feet of laboratory and research space near Greenville, South Carolina, to accommodate commercial production, as well as mycoremediation projects. 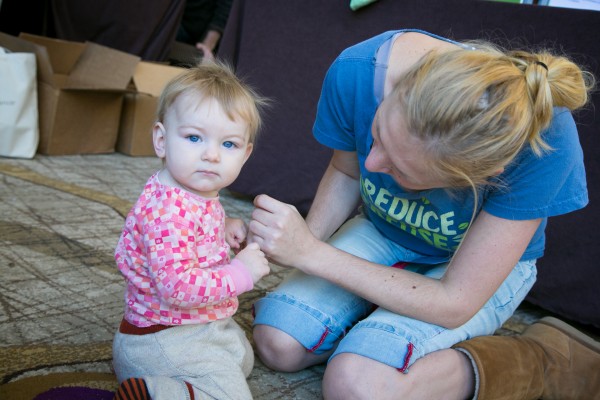