Mountainfilm uses the power of film, art, and ideas to inspire audiences to create a better world. The nonprofit anticipates another sold-out festival this year. A limited number of passes are still available. Buy your pass now. Go here for presenters. Go here for information about The New Normal, the symposium and initiative. Go here to find out about other festival films.

Please scroll down to listen to a podcast featuring Ryan Killackey. His award-winning “Yasuni Man” is one of the featured films at the 39th annual Mountainfilm.  Screenings are Saturday, May 27. 12 p.m. at The Masons and Sunday, May 28, 7 p.m., The Off-Width.

Here is a direct link to another post about 2017 films.

In addition to the screenings, Ryan is also participating in a coffee talk, “Vanishing Traditions,” on a panel with Ben Ayers of the dZi Foundation and director and former Telluride local Ben Knight, Sunday, 8-9 a.m., Ah Haa East. 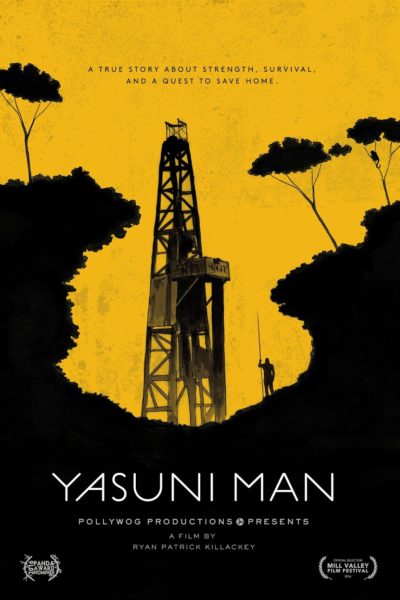 There goes the neighborhood.

The setting is Amazonian rainforest in Ecuador, home to the country’s last remaining uncontacted clan or more accurately, people living in voluntary isolation. The black hats in this moving, chilling story, also a wake-up call, are all too familiar: colonists and illegal loggers who follow the expansion of the petroleum industry (US and Chinese), allied with the national government. The victims: the region itself and everyone who lives there. Violent confrontation over riches such as a $7.2 billion oil reserve is bound to escalate until Eden becomes hell. 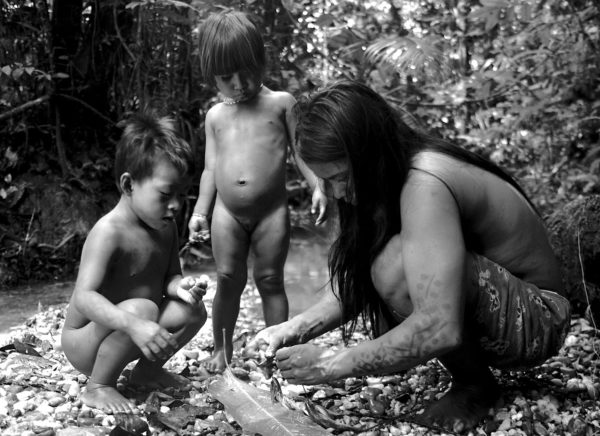 Ryan Patrick Killackey is the poster child for Mountainfilm’s mission to use the power of film, art, and ideas to inspire audiences to create a better world – though it may be too late for “better” for the Waorani, the subject of his first feature film, “Yasuni Man,” now at Mountainfilm 2017 and described by Mountainfilm as “‘Avatar” come to life. But at this point, without  redemption or a happy ending.”

In other words, if you are into Hollywood endings, you might want to skip “Yasuni Man.”

But that would be a loss.

There are many reasons not to miss Ryan’s doc.

For one, the film is already a 5x winner. 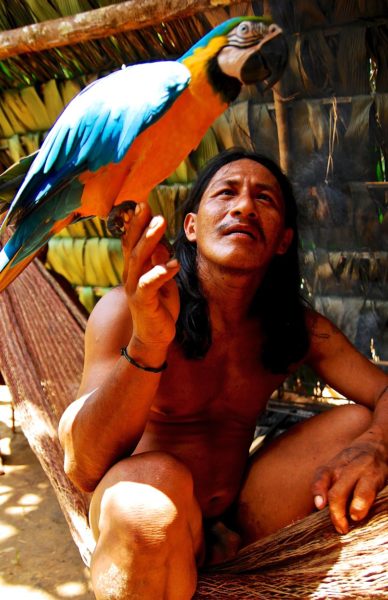 For another, attend a screening to honor Ryan’s abiding passion and unwavering dedication. He filmed for 365 days among five visits over a seven-year period, often at great peril to his life. 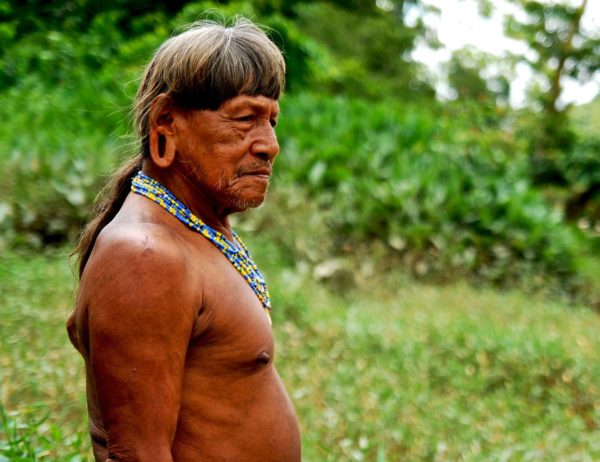 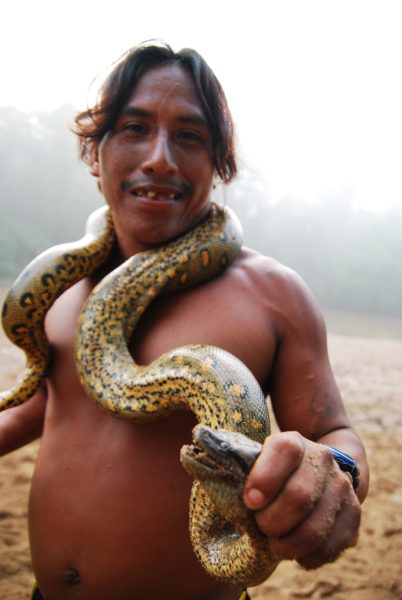 (On the down side, there are also many images of horrific violence. “Yasuni Man” is, after all, a documentary. Not fake news.)

Throughout the film, we  are privileged to meet Ryan’s extended family, the Waorani, and follow them in their daily rituals of hunting and foraging.

Almost inevitably, though, given the through line of 39th annual Mountainfilm and its new initiative, “The New Normal,” “Yasuni Man” circles back to the most essential conversation we are having today about climate change.

The strongest arguments for conserving biodiversity is to protect the ecosystems on which humanity existence depends. Diversified ecosystems preserve watershed, local rainfall, food supply, and soil. The Amazon ecosystem is so vast it creates its own climate. Most rainfall is recycled, and the forest affects light reflection, cloud formation, regional rainfall, and temperature. Chop it down, burn it, trample it and you run large climatic risks – and the destruction of species and peoples too. 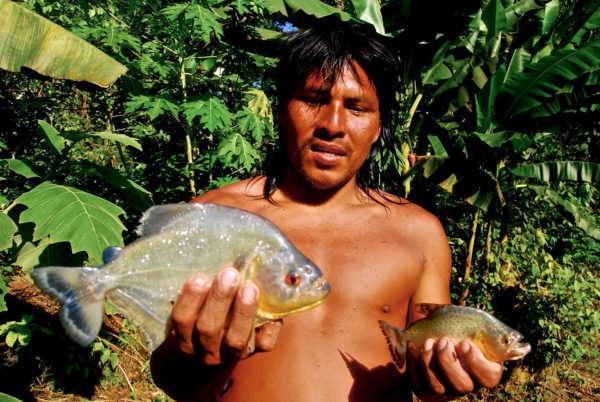 Some ecologists believe that the rate at which species are being lost is so high that if it continues apace, paleontologists of the future will look at the fossil record now being laid down and liken it to earlier mass extinctions such as the one that killed off the dinosaurs.

‘Yasuni Man” shows the rarest and most vulnerable species of plant and animal life, all now subject to predation by chainsaws, bulldozers, and toxic spillage. Out of the sight of journalists and scientists. Guarded by armed soldiers.

Does that necessarily add up to gloom and doom?

That answer depends in part on what we take away from “Yasuni Man.”

What we do about what we see. 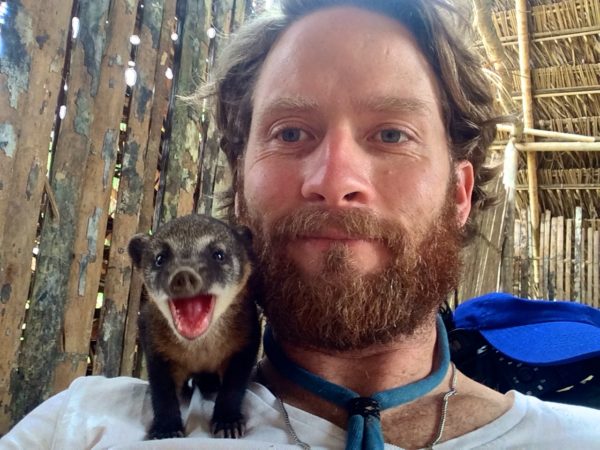 Ryan started out his professional life as a wildlife biologist and expert in amphibians, before, ahem, leapfrogging a career that included studying frogs in freshwater lakes, tracking and live trapping wolverines, and working as a wilderness ranger at a bear observatory to make films.

Ryan was first drawn to Yasuni in 2005 by a love of amphibians in general and frogs in particular. Film-making began four years later in 2009, when he was invited to Boanamo, a remote village that is home to the Waorani. He then launched a Kickstarter campaign to document their lives.

Over the past decade, Ryan has seen the oil companies move closer to Yasuni, building roads and bridges that open up new areas for land clearance, logging and the bush-meat trade. Faced by the tsunami of development, local indigenous groups have held out as long as they can, but are ironically often sucked into the destruction of their own forests.

And here’s one of the punch lines “Yasuni Man”: Look past your own belly button. We are complicit in that destruction: nearly 70% of Yasuni’s oil comes to America, specifically to California, which prides itself as a green machine. There, the black gold is processed at refineries for distribution.

“I want this to be more than a documentary. I hope the data will be used to draw attention to Yasuni and help advocate for genuine preservation that works for the benefit of indigenous people,” Ryan said in a phone interview with The Guardian.

Also, “‘’Yasuni Man’ forces people to understand their role in the destruction; our missionaries, our consumption and our oil companies. It’s hard to admit that you are part of the problem, but it’s the first step to making tangible change,” Ryan added in another interview.

Yet, is Ryan Killackey hopeful?

Check out Ryan Killackey’s podcast to find out more about his life and work and thoughts about climate change.