Telluride’s Wilkinson Public Library, in collaboration with the Ah Haa School and Between the Covers Bookstore, presents Maria-Christina Sayn-Wittgenstein Nottebohm, aka ‘Puppa,” to talk about her freshman book, “Old Masters Rock” (also the name of the blog she writes to encourage art appreciation in anyway with an active curiosity.)

Puppa is scheduled to speak on Monday, June 5, 3:30 p.m. Parents interested in a mind-expanding experience for their offspring, one that has nothing to do with clicking or streaming, should mark their calendars.

“Looking at art with my son and his friends has been a revelation for me. You will be amazed at how sharp kids are, how quickly they grasp the artist’s message, and at their fascinating observations. You will start out hoping that you will teach your child about art, but in the end it will be the reverse: your child will be teaching you!”

Go here to explore fine art and architecture from around the world here.

Scroll down to listen to Puppa’s podcast. Find out why “Old Masters Rock: How To Look At Art With Children” is a highly addictive gateway drug to a brave new world of ideas for the entire family. 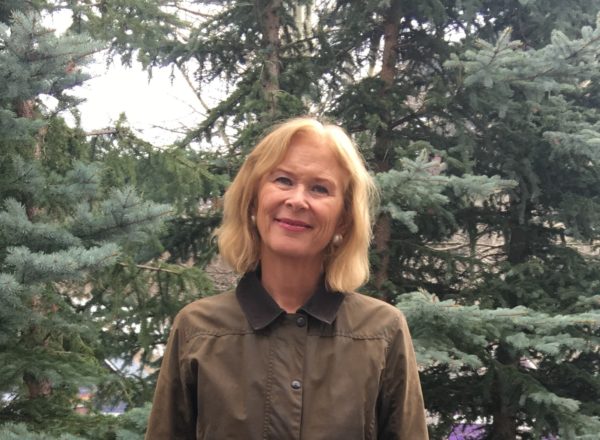 Making art is not about putting the right color on the right surface. It is about synthesizing one’s experiences.

And the study of art is about the same thing, only bigger and more important than any one artist or individual because, well…

Ruskin, who lived in the 19th century, was a great art critic and writer. The man really cared. And he really looked. It is to Ruskin we owe the idea of the visual arts as the ultimate manifestation of human experiences and endeavors.

By that Ruskin meant that works of art (and architecture) house the moral and spiritual meat of human history. They are the palpable texture and summation of human culture.

So when art scholar and dealer in Old Masters, Puppa Nottebohm, says that her new (and first) book, “Old Masters Rock” is not a lesson in art history, that it is about much more, she is, in a very real sense, extrapolating from Ruskin. Her “children’s” book underlines and puts an exclamation point on the fact that the study of art is all about understanding the human experience. 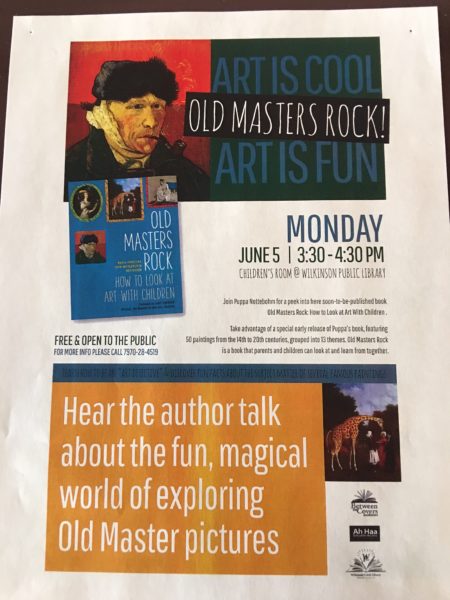 “With the help of my book, looking at art with young people, should become tremendous fun. I designed ’Old Masters Rock’ to stimulate children’s brains by asking to them to make observations and answer questions. The information is dense, but it is delivered in simple, entertaining ways that offer both visual and mental stimulation, targeting the ways young minds work.”

For example, just one of many sites on the subject, Kinderart.com, offers the following reasons to teach young people about art:

• It’s been proven that early exposure to visual art, music, or drama promotes activity in the brain.

• Art nurtures inventiveness as it engages children in a process that aids in the development of self-esteem, self-discipline, cooperation, and self-motivation.

• Participating in art activities helps children to gain the tools necessary for understanding human experience, adapting to and respecting others’ ways of working and thinking, developing creative problem-solving skills, and communicating thoughts and ideas in a variety of ways.

In “Old Masters Rock,” kids are identified as “Art Detectives,” told to “take charge.” Puppa uses as an example an incident from her own life with her own “art detective” to illustrate why that handle makes sense: 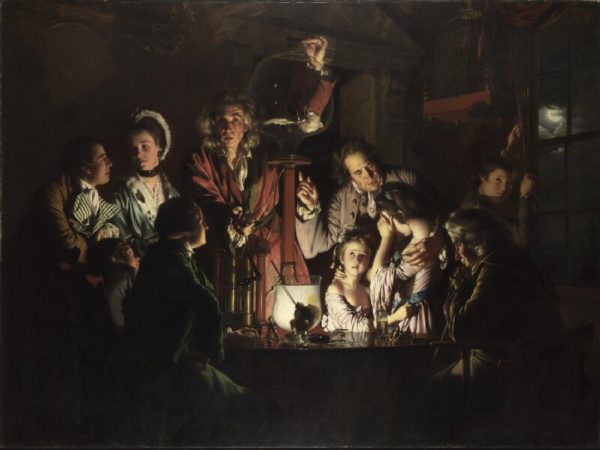 John Wright of Derby’s “Experiment with an Air Pump.”

“While discussing Joseph Wright of Derby’s ‘Experiment on a Bird in the Air Pump’ (pgs 86-87), our then nine-year-old son Gaspar made an extraordinary discovery. The bird in the air pump had been incorrectly identified for 250 years. Gaspar took one look and said, “This bird is not a cockatoo, it is a cockatiel!”

Why? Without checking a source he explained: “a.) The cockatoo would be too large to fit into that small air pump; and b) A cockatiel’s crest is at the front of it’s head.”

When looking at Watteau’s Shop Sign (pgs 66-67) Gaspar and his friends measured the approximate size of the shop and figured out there would not be enough room inside it for them.” 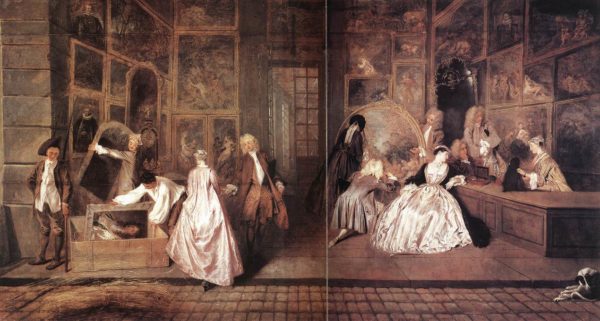 Kids see things adults no longer notice – if they ever noticed them at all.

“Parents should not worry about not knowing the artist or his or her story. They can be sure children will connect the dots and make surprising inferences. Reading ‘Old Masters’ together, together, parents learn from their kids’ insights,” adds Puppa in a preview of her talk.

In the book’s intro, Puppa explains how and where to look at art even if you can’t physically visit a museum. Her lessons apply whether you are actually visiting a museum or visiting virtually online. (Click on the link in the intro.) 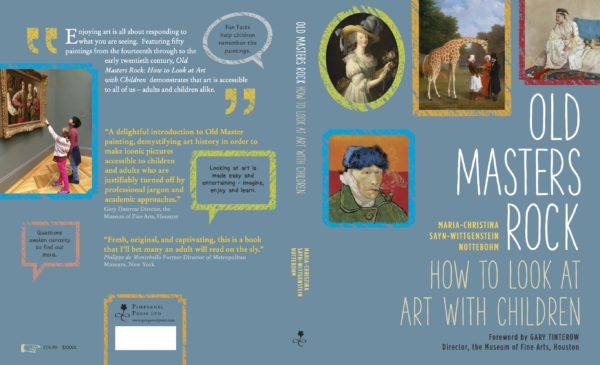 She also offers great advice about how to visit a museum with a child. For example, one hint is to buy tickets in advance online to avoid queues. Do not go for the blockbusters, the Mona Lisas of the art world. Stay away from crowds and find other hidden gems and go for the “gems” your kiddos say they want to see. If they are not Impressionist fans, you might have to skip Monet that day.

Another of Puppa’s main points is not to overload your child with too much hard data about a painting:

“It is more fun to work things out visually (and it helps us remember them). Focus on getting visually involved with the picture instead, ask questions like ‘Do you think that portrait of the kind or other ruler is about demonstrating his power to revealing his human side?’ and ‘What do you think the sitter was like as a person?’ Once children engage directly with an image their curiosity will be sparked and they will want to know more. They imagine being the person depicted, playing with an animal, or walking in the landscape. The book gives them clues and the treasure hunt begins.”

“Old Masters Rock” is filled with sidebars such as “Fun Facts, which Puppa describes as ”memory aids.” Dense as molasses with information, these features complement the painting under discussion. 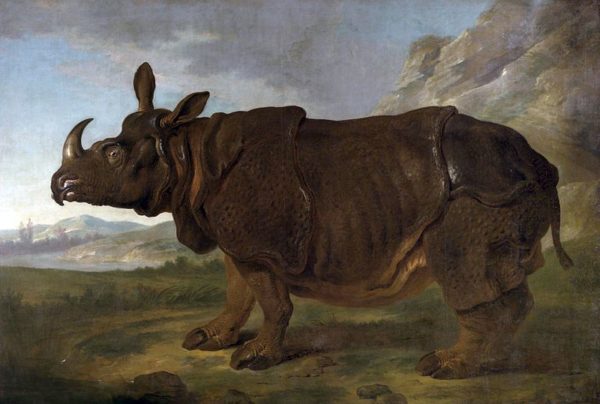 Oudry’s “Clara,” was a female Indian rhinoceros who became famous over 17 years of touring Europe in the mid-18th century.

Did you know for example that a rhinoceros named Clara was once the most popular young lady in Europe or that she weighed the equivalent of a minibus? Fun fact. (For more, check out the chapter that includes Jean-Baptiste Oudrey’s painting, “Clara The Rhinoceros.”)

The Fun Facts associated with Hans Hoffman’s painting entitled “A Wild Boar Piglet,” (1578), include information like “a wild board can smell humans from 6.8 miles away” and “although a pig can hear well, it cannot see much.” 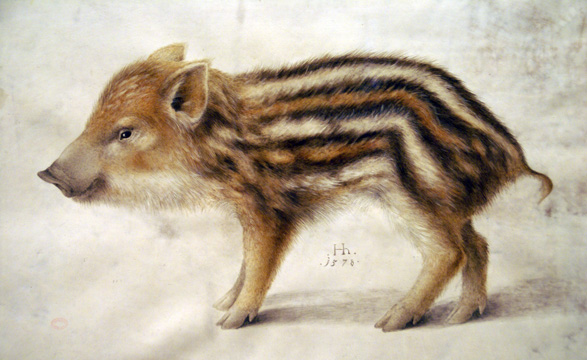 In her account of Edvard Munch’s “The Scream,” (1895), Puppa offers up some interesting information about Norway – the fact that in summer, the sun sets around 11 p.m. and rises about 4 a.m. “During the winter, it is the opposite. Children go to and from school in the dark…” – and even more interesting and surprising information about the impetus for the iconic painting itself: 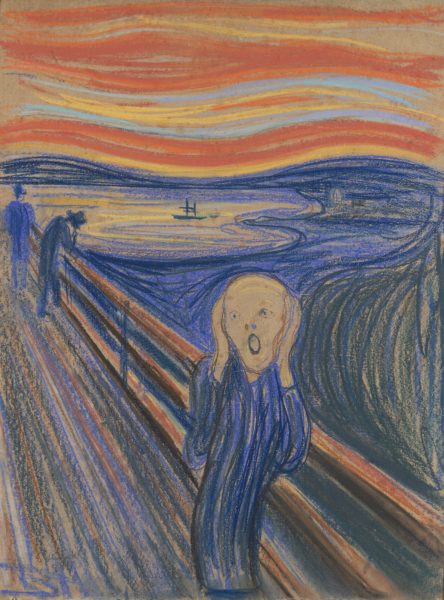 Munch’s iconic “The Scream.” Photographed by The Museum of Modern Art.

I was walking along the road with two friends. The Sun was setting –
The Sky turned a bloody red
And I felt a whiff of Melancholy – I stood

Still, deathly tired – over the blue-black Fjord and City hung Blood and Tongues of Fire
My Friends walked on – I remained behind

– shivering with Anxiety – I felt the great Scream in Nature
E.M. 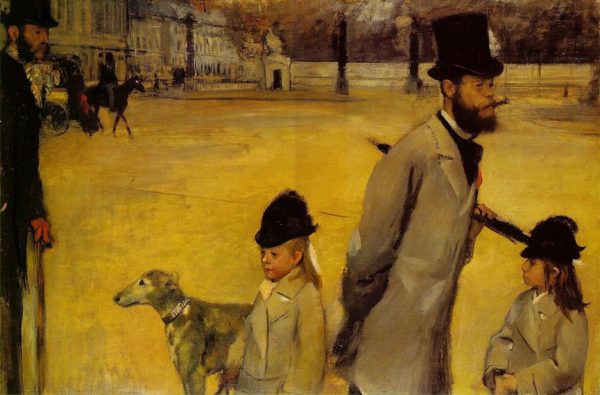 Degas was born in Paris to a creole mother from New Orleans and a French father. His parents wanted him to become a lawyer. At first he followed their wishes and went to law school but his real passion was painting. His bedroom looked like an artist’s studio. He admired Ingres (see page 46), who advised him to practice drawing. At nineteen he abandoned his studies and focused on his art full-time. He visited New Orleans where he painted his American relatives. Look up A Cotton Office in New Orleans (Musée des Beaux Arts, Pau). He was friends with Manet (see page 84) and Cassatt (see page 38). Although often called an Impressionist, Degas thought of himself as an independent artist or a Realist. He admired the Old Masters more than his contemporary Impressionists.

Because Puppa salt-and-peppered her pages with so many surprising facts, things even deep geeks and history buffs might not know, Old Masters Rocks is tailor-made for trivial buffs – or really anyone, young or old, with an acquisitive mind. 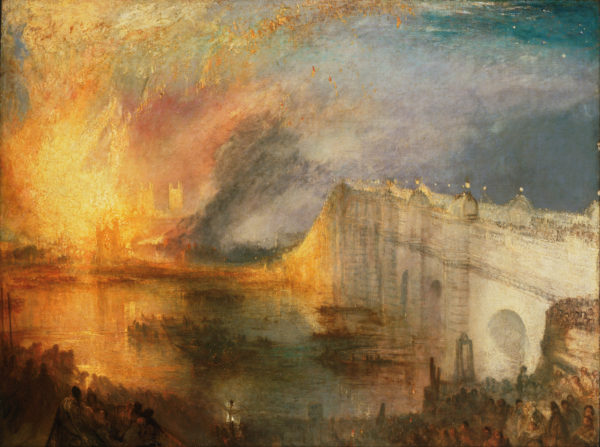 JMW Turner was the darling of art critic John Ruskin. Turner’s “Burning of the Houses of Lords and Commons” is featured in “Old Masters Rock.”

And the mention of Turner brings us right back to the beginning, back to Ruskin.

“Neoclassical critics had attacked the later work of Turner, with its proto-Impressionist concern for effects of light and atmosphere, for mimetic inaccuracy, and for a failure to represent the “general truth” that had been an essential criterion of painting in the age of Sir Joshua Reynolds. Drawing on his serious amateur interests in geology, botany, and meteorology, Ruskin made it his business to demonstrate in detail that Turner’s work was everywhere based on a profound knowledge of the local and particular truths of natural form. One after another, Turner’s “truth of tone,” “truth of colour,” “truth of space,” “truth of skies,” “truth of earth,” “truth of water,” and “truth of vegetation” were minutely considered, in a laborious project that would not be completed until the appearance of the fifth and final volume of Modern Painters in 1860…,” (from brittanica.com).

In her account of Jospeh Mallord William Turner’s “The Burning of the Houses of Lords and Commons” (c.1834-5), Puppa put the very similar ideas across in a way even adults can understand:

“Turner was one of the most important Romantic artists in Britain. His rival was Constable (page 24) Looking at Constable’s gentle images of Britain you feel as though you are a part of the landscape. Turner wants you to feel the drama of nature. In his other pictures storms rage over the seas and dramatic sunsets illuminate the skies. At the end of Turner’s life his pictures become almost abstract. Constable never left Britain. Turner travelled extensively on the Continent. Do you prefer Constable or Turner, or perhaps you like both? The two men were never friends…”

But you would be well advised to make friends with “Old Masters Rock.”

And so by reading it with you children, by extension, moms and dads, you become cool too.

Formerly an expert for nineteenth century pictures at Sotheby’s, New York, Puppa shares her passion for art with children and adults by writing a successful free online blog www.oldmastersrock.com.

She is an expert for European pictures and advises major collectors and museums in the U.S. and Europe. Puppa has sold works to the Getty, the Metropolitan Museum of Art, the Dallas Museum of Art among many others.

Puppa and her husband Charles are the parents of an astute 12-year-old boy named Gaspar, who has been exposed to art since an early age. The family makes visiting monuments and museums the focal point of their travels.