Please scroll down to the bottom of the story to listen to a podcast featuring returning presenter Tymi Howard Bender. 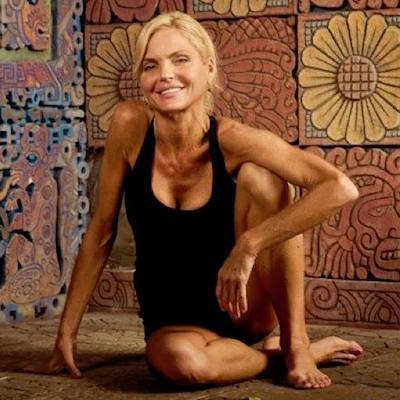 Is yoga a religion?

Most students of the tradition would answer with a resounding “no.”

However, in Patanjali’s Yoga Sutras, the ancient text and “bible” of the the art and science of yoga, he lays out a moral code for yogis to follow and a path to the mystical state of samadhi or union with the Divine (within).

The yoga tradition also recognizes the path of bhakti yoga, a branch whose adherents devote themselves to a personal form of God.

The “bash” is described by Tymi as follows:

“A Devotional Vinyasa Flow Class & Bhakti Music celebration. A non-dogmatic, inspired and spirit-filled flow practice supported by contemporary and kirtan beats. You will most definitely sweat, sing, laugh and when the spirit moves you dance! This is my signature class, not to be missed….be in the bhav, as we cultivate the BHAKTI LOVE!”

Tymi begins the weekend with “The Dance of Shiva & Shakti/Vinyasa & Yin Yoga,” a two-hour practice, 1 – 3 p.m. on Friday July 21, or one-hour of vinyasa flow to build heat and gets prana/energy moving through the body, followed by a one-hour Yin practice, focusing on the connective tissue, and fascia.

“The Vin / Yin combo allows us to dive deep into unexplored layers of tension and patterns of holding in the body. Float off your mat feeling balanced and blissed out,” Tymi explains.

“LILA” Yoga Playground, 10:45 a.m. – 12: 15 p.m.on Saturday, July 22, invites participants to turn upside down and all around in backbends, headstands, handstands and creative variations that will leave everyone feeling empowered.

Finish up the weekend on Sunday, 3:30 – 5:30 p.m., with Tymi’s second class of the day: “Be Still & Know/Yin Yoga,” a practice targeting connective tissues, such as the ligaments, bones and joints, normally not exercised very much in traditional asana practices.

Yin Yoga is a perfect compliment to the dynamic and muscular (yang) styles of yoga that emphasize building internal heat and the lengthening and contracting of our muscles. 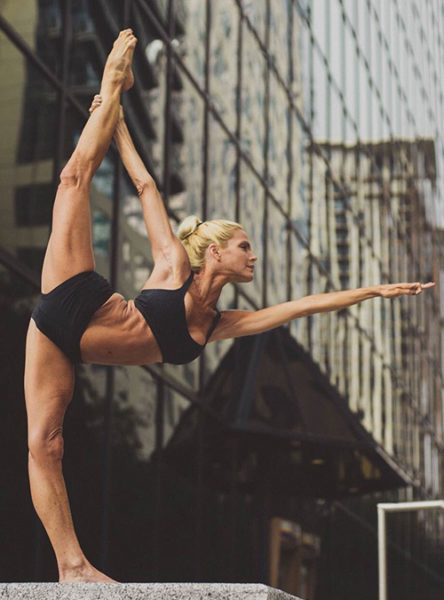 It is a well-known (and scientifically proven) fact that yoga lowers blood pressure and reduces stress, conditions linked to chronic illness. Further it is believed (and borne out by research at Mount Sinai, New York) that a regular yoga practice may affect the way our bodies react to genetic mutations that underly autoimmune disorders. And just three to five minutes of controlled breathing (or pranayama), might well serve as an antidote to chronic pain such as backaches and headaches.

In 1993, as a professional ballet dancer with several nagging injuries, Tymi Howard found her way into an Ashtanga class (later Bikram, Iyengar, Anusara and so on). Pain ultimately led to gain in the form of a new passion.

But Tymi herself was not (and is not) the only winner in what turns out to be a dramatic story with some interesting plots twists.

Put simply, Tymi’s path to personal transformation was not linear – nor is her resume conventional. En route to her ultimate profession as an 500 E-RYT international yoga teacher, certified holistic health coach, and owner of the Guruv Yoga Studios, there were Hollywood gigs and summer weekends at the Playboy Mansion.

Ultimately Tymi put all that behind her, including a promising career in dance, and today has inspired hundreds, maybe thousands of students with her dynamic, playful style of teaching and sequencing, often to music.

Tymi has also been teaching 200-hour teacher trainings in China and filming classes for China/Yoga Online, which she describes as “an amazing and crazy adventure.”

Tymi married for the first time at age 45 and has a six-year-old stepson.

“I am dedicated to inspiring people to discover their life’s purpose through the art of yoga,” said Tymi.