Join Telluride Arts HQ to welcome a new exhibit by Dave Pressler, “Exploring Imaginary Worlds,” which is open now for Telluride Film Fest weekend. The official opening reception will be held during Telluride Art Walk on Thursday, September 7, 5-8 p.m. The show runs at HQ through September 2017, 135 West Pacific, across the street from the Telluride Library.

Another major Art Walk show open right now is Micheline Klagsbrun”Remains To Be Seen.” The latest body of work of this internationally renowned artist is now up at Telluride Arts’ Gallery 81435, although the official opening of the show and artist’s reception coincides with Art Walk. That date is Thursday, September 7. More on Klagsbrun’s show here. 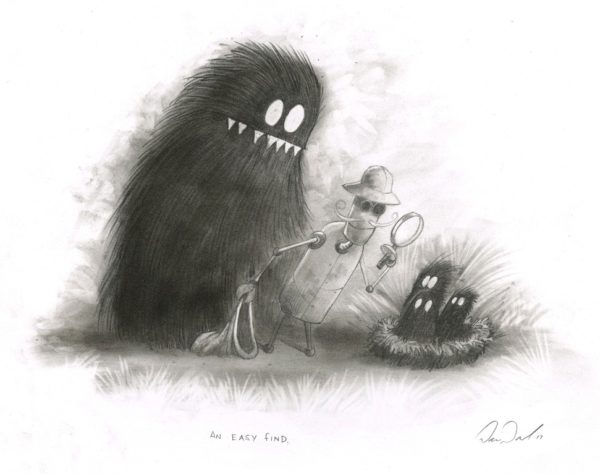 In our cyber world that grows ever smaller everyday. As the wonders of nature and the universe become more commonplace thanks to digital photography and affordable travel, the idea of a flawed explorer who explores the mysterious world before him, yet never observes the amazing creatures around him—only focusing on “What else is out there? What am I missing?”— is a humorous observation on our screen lives.

Pressler is a Los Angeles-based artist and character designer who has used sculpture and illustration to fuse two of his primary passions: fine art and the world of pop entertainment.

Over the past 20 years, Pressler has designed characters and worlds for such companies as Kid’s WB, Disney, Fox Kids Network, Wild Brain, and The Jim Henson Company to name a few. In the last decade, he has shifted his focus to the universe of TV animation, where he has co-created and designed for the Emmy-nominated “Robot And Monster” for Nickelodeon.

Pressler is currently working at Dreamworks TV Animation and has just illustrated his first picture book for kids, Back To School With Bigfoot, published by Scholastic. He is now hard at work preparing for an exhibition at the Lancaster Museum of Art and History in 2018.

In addition to his media projects, Pressler is an accomplished painter and sculptor whose work shows in galleries all around the world. He also lends his sculpting talents to the collectible vinyl-art toy world with Necessaries Toy Foundation’s Mark Ryden’s “YHWY,” Camille Rose Garcia’s “Camille’s Girls,” The Ron English “Rabbit” figure, Brendon Monroe’s “Sour” for Android 8, Nathan Jurevicius “Monkey King,” and most recently “Mr. Pumfrey and His Astounding Mechanised Perambulator” by Doktor A.