The unending wonder and dramatic precariousness of the human condition are on parade in two distinctly different shows in two distinctly different mediums: “Mary Jane,” a play starring Carrie Coon at the New York Theatre Workshop; and the sculptures and drawings of Tom Otterness’ “Tipping Point” at the Marlborough Gallery. (Coincidently, both shows are up through mid-October.) 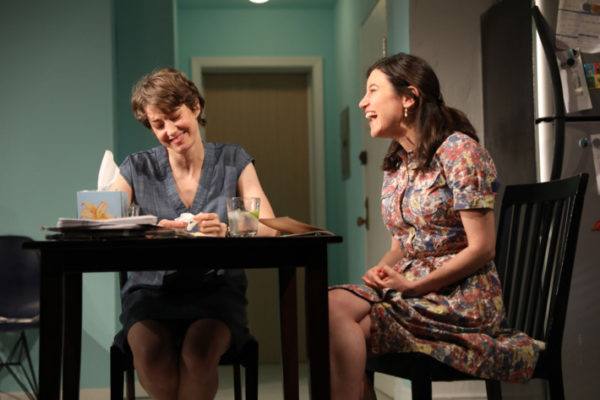 In “Mary Jane,” playwright Amy Herzog explores the stark reality of a mother left to care for her chronically sick child by herself.

No laughing matter – and yet…

Thanks to Herzog’s skillful writing  and its electrifying star, Carrie Coon, “Mary Jane” is as funny as it is grim. It is life actually, yes, with its own deeply sad spin, but still.

Coon, who this year alone year starred on TV in “The Leftovers” and was nominated for an Emmy for her work in “Fargo,” is an actress who it seems could take any pitch thrown her way and turn it into a grand slam. The experience of her character in this story runs the gamut from abject despair to hardy laughter – with time out for a Coke.

We found ourselves thinking that is exactly what a single mother would do and say when her sick baby has a seizure. Her denial, her rationalizations would be my exact response.

Ditto for the network of female friends and helpers in Mary Jane’s universe who, in their cameos, all strong, also explore their places in the world and their unique responses to the lemons they got handed.

Carrie Coon may be one of the greatest actors you are only vaguely familiar with working today. Unless you are living in a land of milk and honey where the sun always shines, you will relate to her “Mary Jane.”

A bit like Modigliani – check out our review of his show at the Jewish Museum here – in his well-known figures, Tom Otterness distills facial features and bodily shapes down to an essential, indelible, universal essence that somehow manages to embody art and cultural history, plus myth, fable and allegory while, at the same time, riffing on current events. 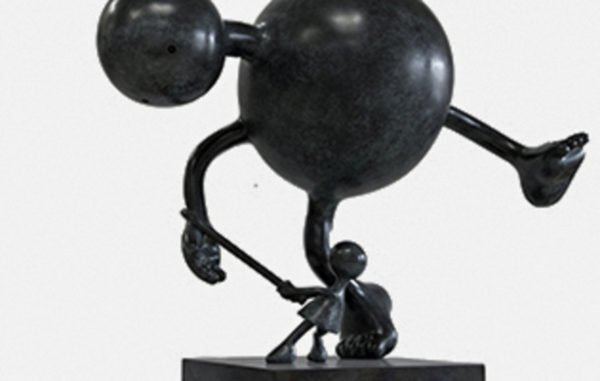 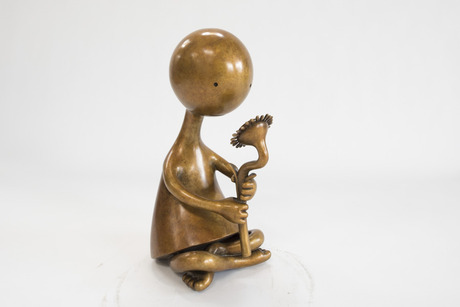 Just for the record, the flower smiles back.

As writer Carlo McCormick states in the catalogue for the exhibition: “There is in the rambunctious hurly-burly celebration of life in Otterness’ art something wonderfully askew, a disorder forever bubbling under the cool surface and impeccable compositional integrity of his sculpture.”

Unlike in “Mary Jane,” where the disorder in on the surface. But as is the case with Otterness’s bronzes, the play “elevates the lowly; makes magisterial the plebeian… In portraying life’s moments, they allude to universal truths.” (Carlo McCormick again.)

And while we are on the subject of triumph, another no-miss show is Dale Chihuly at the New York Botanical Gardens in the Bronx, up through October 29. 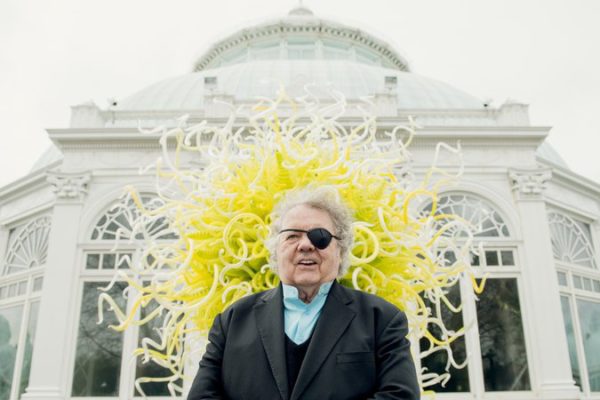 On display are over 20 different installations over the garden’s 250 acres, bravura glass sculptures, all variations on the theme of organic forms, including a lemon sun, a sapphire star and blood red reeds. The body of work amounts to a  tour of some of Chihuly’s greatest hits over the years.

And this is the artist’s first New York show in over a decade. 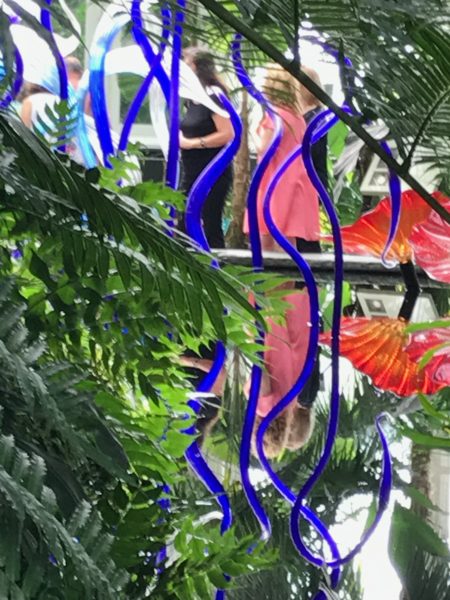 Chihuly in the Conservatory. The photo here and below are by Clint Viebrock. 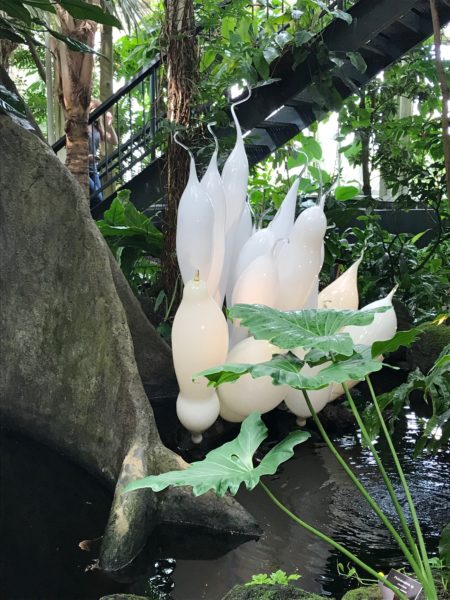 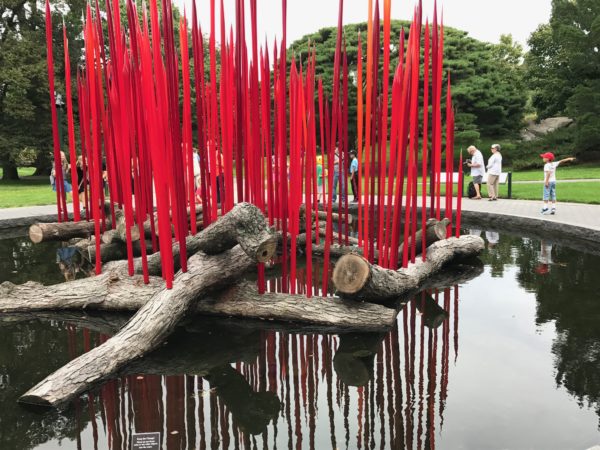 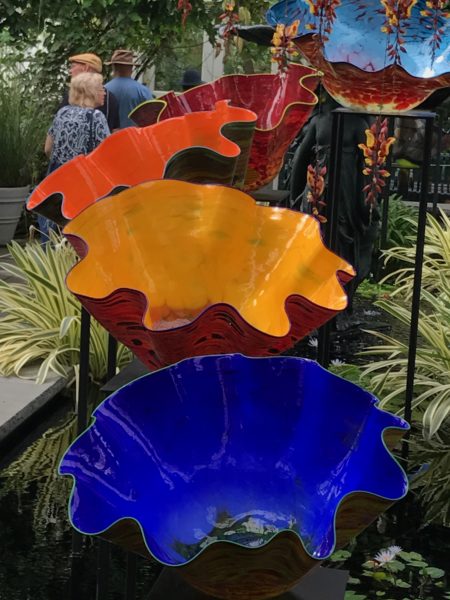 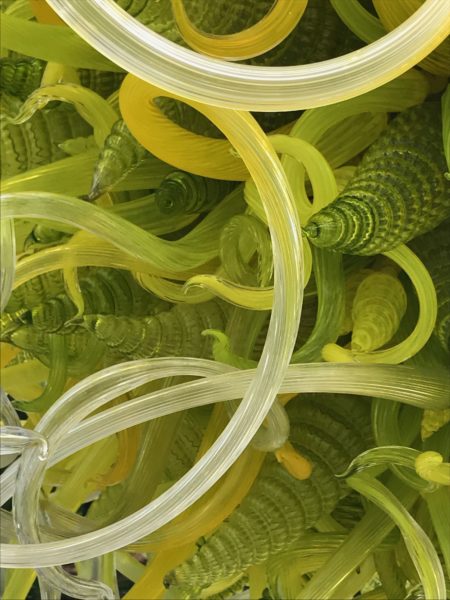 Here is what Ted Loos of The New York Times had to say about Chihuly in the gardens:

The single-word, all-caps title — “CHIHULY” — of a new show at the New York Botanical Garden conveys immediately exactly what visitors will be getting: vibrant glass sculptures in a familiar style, one that often recalls nature, and sometimes competes with it…

For the exhibition, which runs through Oct. 29, the Seattle glassmaker Dale Chihuly and his team have spread 20 different installations throughout the garden’s 250 acres. Visitors who head to the Bronx will find a 30-foot-tall “Scarlet and Yellow Icicle Tower” and the spiky blue supernova “Sapphire Star,”…