Among the highlights of the happening on October 5 is a show at the Telluride Gallery of Fine Art , a retrospective of the work art the iconic artist/illustrator Bernie Fuchs.

For an overview of Art Walk, go here.

Scroll down to watch two different videos featuring Fuchs and his work. 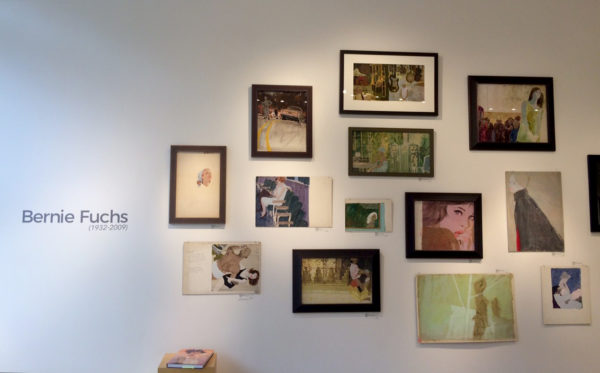 The words “abstraction” and “disruptor” would not on the surface appears to rhyme with “illustrator” – unless, of course, the illustrator in question is the iconic Bernie Fuchs.

That story entitled “Fine Art vs. Art That Is Mighty Fine” makes a compelling argument as to why Fuchs belongs in any elite fraternity of fine artists and why and how the illustrator broke new ground and was truly radical in his day.

In the 1950s and ’60s, fine artists Robert Motherwell, Robert Rauschenberg and Franz Kline dazzled art critics and museums around the world with their brilliant avant garde paintings.

At the same time, another painter– Bernie Fuchs– dealt with the exact same aesthetic problems in a different forum. Like Motherwell, Rauschenberg and Kline, Fuchs rejected the realistic painting of his predecessors (such as Norman Rockwell) and focused on broader qualities of abstract design and composition.

If we compare Fuchs’ art with the work of the other three painters, applying the same standards, it is difficult to tell which painter is superior. Fuchs’ compositions were equally bold and lovely. The colors and shapes were comparable. In fact, the only consistent difference between Fuchs and the three “fine” artists was the purpose for which the art was created. Motherwell, Rauschenberg and Kline created art for art’s sake. Fuchs’ art had a commercial function. He created art for a client’s sake, for he is an illustrator. 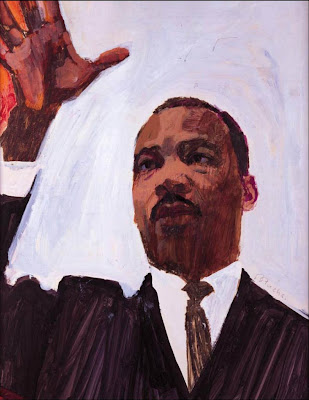 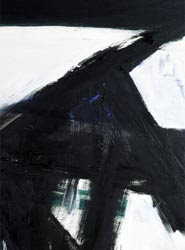 These two paintings by Fuchs (above) and Kline (below)share vigorous, caligraphic brush strokes, strong compositions against a painterly white background, and stark use of negative space. Both were highly innovative for their day. Can you tell which one belongs in a museum? 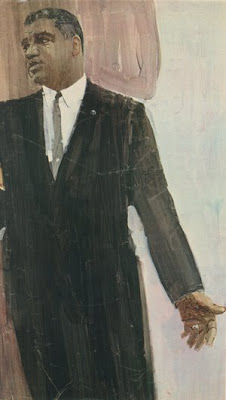 … accomplishes everything the Motherwell painting below it does. 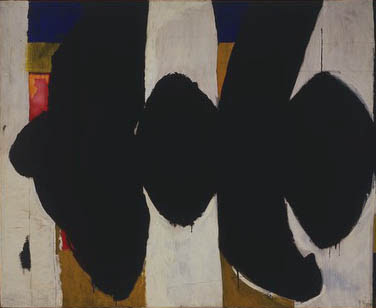 The big difference: the Fuchs painting also serves a function…

The Telluride Gallery of Fine Art presents a collection of the remaining treasures from America’s legendary illustrator Bernie Fuchs (1932-2009).

Ranging from original oil paintings to sketches and studies, the work on display showcases the artist’s prolific career, including two new paintings from the book  “Champions,” (1993), featuring Billy Jean King and Joan Benoit, which just arrived from Fuchs’ estate. Also a collection of rare preliminary sketches and studies from 1950’s-1960’s accompanied by the newest biographical study of the artist, “The Life and Art of Bernie Fuchs,” in which many of the finalized and published versions are represented. 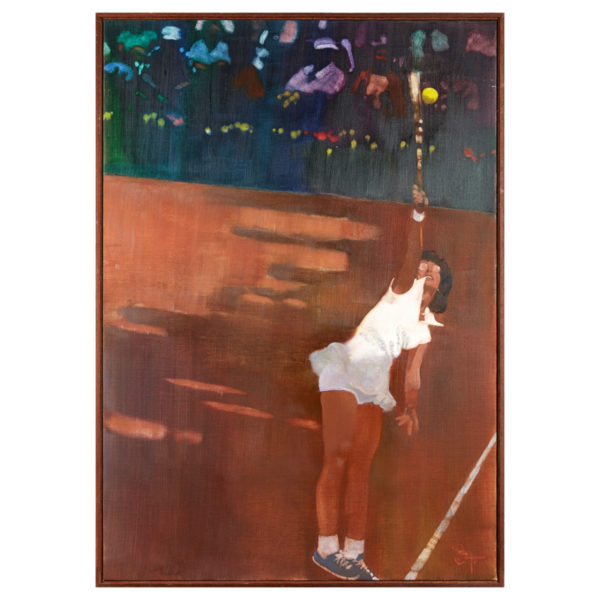 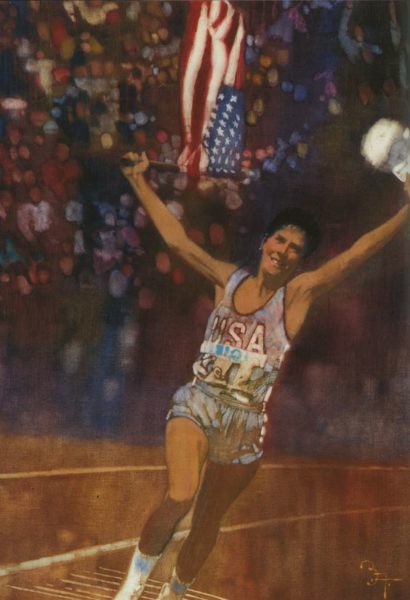 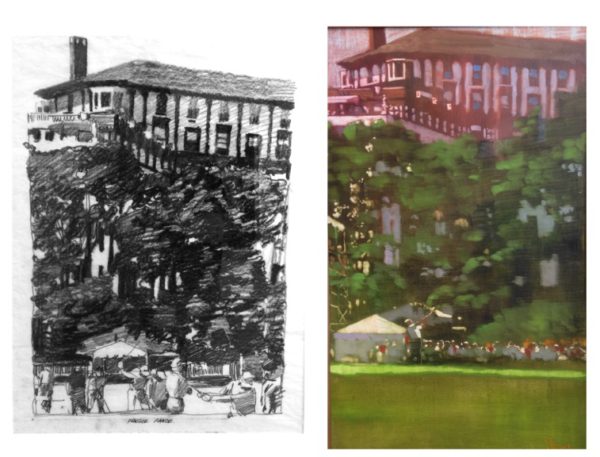 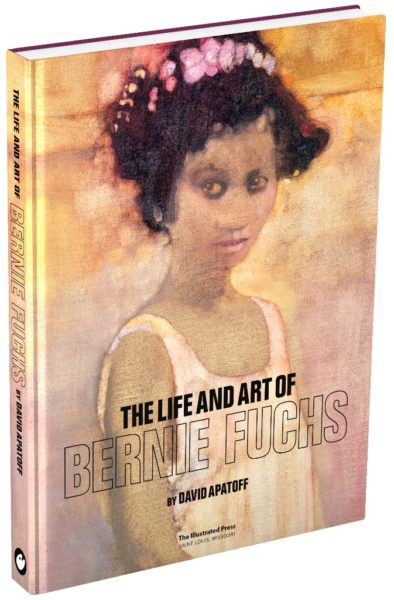 The October show is the first of many  Telluride Gallery of Fine Art has given Fuchs over the years, including a blockbuster 50-year retrospective in June 2008 honoring the great artist who the gallery’s former owner, Will Thompson, once felt was “sorely undervalued and overlooked.” And yet, when Bernie Fuchs died September 17, 2009 of cancer, both The New York Times and The Washington Post paid homage to the man whose work was familiar to nearly everyone in America through reproduction alone.

Over the years, Fuchs worked regularly and steadily for all the major automobile companies, publications from Sports Illustrated (25 years) to The New Yorker, McCall’s, Cosmopolitan, Ladies Home Journal, and TV Guide, as well for advertising agencies and large corporations from Rolex to Citigroup.

Bernie Fuchs lived the American Dream when that dream was still going strong.

His rags to riches story began in the small, Midwest town of O’Fallon, Illinois. By age six, Fuchs had determined to become a musician in Glenn Miller’s band. Had it not been for an industrial accident that cost him three fingers on his right hand he might have become a leading jazz trumpeter like his friend Jack Sheldon. Instead, a tough love art teacher at Washington University School of Fine Art in St. Louis taught Fuchs how to draw holding the chalk with his remaining fingers. A prodigy, Fuchs wound up turning the field of commercial illustration on its head, becoming the youngest artist ever to be elected into the Illustrators Hall of Fame.

As an artist, Fuchs was often compared Norman Rockwell. However, apart from the fact that they are both illustrators, Fuchs is a modernist in realist’s clothes, (as the story above illustrates), more interested in abstract design and composition than in the representational narratives of his predecessors. At exactly the same time another art world superstar, the aforementioned Rauschenberg, was wowing critics with his montages, Fuchs created a TV Guide cover – he is credited with 39 – using multiple images to tell his story. His innovative assemblages challenged the prevailing orthodoxy that illustration had to be a single image.

Bernie Fuchs also stood shoulder to shoulder with the best painters of light, among them Rembrandt, Vermeer, J.W. Turner, and the Impressionists. His paintings are bathed in an amber glow so soft the light appears blown on. His colors shimmer like jewels.

Like the best portrait artists, Fuchs managed to convey his subject’s inner life: his JFK for example is contemplative and vulnerable and no wonder – although it was still top secret, the Cuban missile crisis was about to break.

In the first video, Fuchs talks about his career as an artist and his close relationship with the Telluride Gallery of Fine Art. In fact, the video was produced in Telluride.

The second analyzes an illustration done by Fuchs and shows how much his illustrations can teach art students about art.