On our road trip to the Left Coast, so far we have enjoyed fabulous food (earth-to-plate at Seattle’s wonderful Terra Plata; oysters harvested a few yards away at a roadside restaurant in Hama Hama, Washington), also food for thought, including a pearl of a show at the Seattle Art Museum featuring the work of Andrew Wyeth. We are writing this post from our hotel room in Cannon Beach, a picturesque resort town on the boast of northwest Oregon. (See Clint Viebrock’s related story about our perfect road trip to Cannon Beach.)

Dead leaves float together in infinity behind a sheet of ice, the barrier between the world of the painting and the viewer, creating the illusion of an all-over abstraction. (A departure for the artist known for depicting the real nitty gritty?) 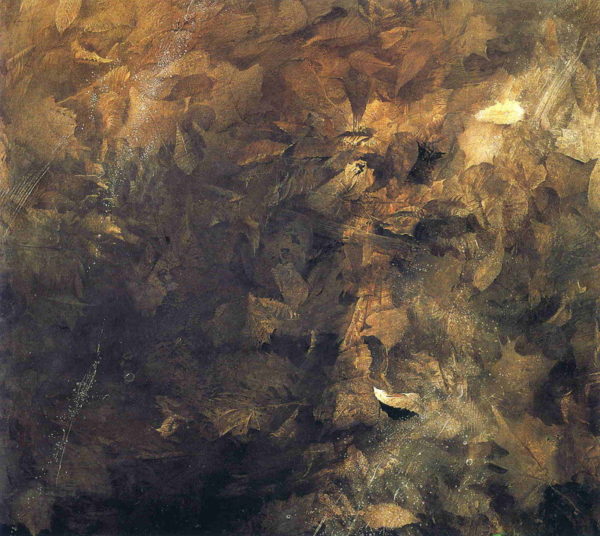 A tempera by Andrew Wyeth, (1917-2009), one of the best-known American artists of the mid-20th century. The artist’s favorite subjects were the land and people around him, in his hometown of Chadds Ford, Pennsylvania, and at his summer home in Cushing, Maine. Wyeth is often quoted as quipping: “I paint my life.”

Wyeth painted Thin Ice at age 31 (in 1948), the same year he created his best known image, Christina’s World and a short 11 years after his career as an artist was launched with a one-man show at New York City’s Macbeth Galley, where all of his pieces sold immediately. 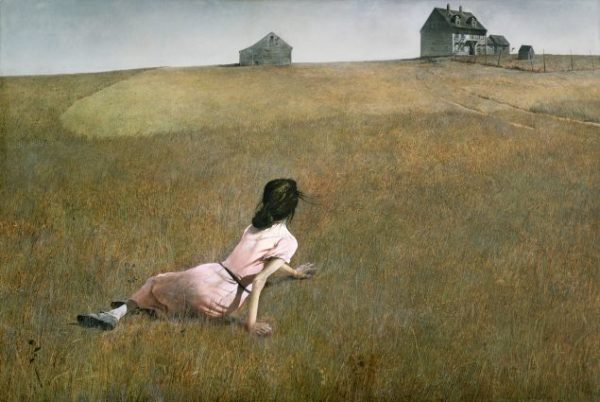 Thin Ice is on display for the very first time in the U.S. – it sold off the easel to a Japanese collector –  in the sprawling Andrew Wyeth retrospective at the Seattle Art Museum.

The ambitious show – over 100 images, watercolors (dry-point and traditional), drawings, and egg tempera paintings, created over a seven+decade-long career –  should soften, if not dismiss altogether, the regular blows from erudite pens Wyeth’s work tended to elicit in the past – at least among the cognescenti. It will definitely shore up the artist’s many admirers, regular folks who don’t give a hoot about the fact Wyeth never had avant-garde cred. 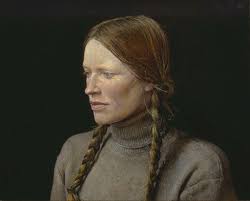 Right after WWII, when the center of the art world shifted from Paris to New York, a loose, disparate confederacy of artists known collectively as Abstract Expressionists were making a very big deal (and splash) about the importance of the action of painting, art for art’s sake, but Wyeth just kept on keeping on, doing his own thing, painting his moody pastorals, external and internal landscapes, which tell undecorated truths about his surroundings, his friends, and his lovers (like Helga?, still a debate).

Thin Ice. The words define Wyeth’s stature among many major critics of the 20th century, who considered him Listerine, the artist they loved to hate, a hyper-realist in a world turning increasingly abstract. Which meant encapsulating regional values as the artist did was out of fashion.

“I think he’s O.K.—he is sophisticated although kind of boring. Dead and dry,” The New Yorker’s Peter Schjeldahl once wrote.

And from one of my mentors, art historian and critic Robert Hughes: “(his work suggests) a frugal, bare-bones rectitude, glazed by nostalgia but incarnated in real objects, which millions of people look back upon as the lost marrow of American history.”

However, in sharp contrast, according to several sources, in his diary, the great connoisseur of Italian art, Bernard Berenson, wrote admirably about Andrew Wyeth. And when Winston Churchill, a great statesman, true, but also a high-level amateur painter, visited Boston, he made arrangements to have Wyeth watercolors hang in his hotel room at the Ritz.

The rural poet Robert Frost was also big fan, which is no big surprise: the trajectories of the two artist-celebrities was aligned. Both men lived to be very old– Wyeth died at age 91, still painting. Both were embraced by the Kennedy administration: Frost read a poem at the Kennedy inauguration in 1961 and Wyeth was awarded the Presidential Medal for Freedom. Both won Pulitzer prizes. Both were thought to embrace and reflect rural values in their work.

Interestingly another great Wyeth admirer was Elaine de Kooning, an art critic, painter and wife of one of the greatest and best-known Abstract Expressionists, Willem de Kooning.

And New York’s Museum of Modern Art’s legendary founding director, a taste-maker if there ever was one, Alfred Barr, who also an admirer.

We visit MOMA often. Fact is some of the largest crowds can be found huddling around Christina’s World, the image of a woman with a degenerative muscular disorder, Anna Christina Olsen, a friend of the artist and the artist’s wife Betsy, who is making her way home without a wheelchair.

Barr acquired that painting for his museum in 1949 and Thomas Hoving, who later became director of New York’s Metropolitan Museum of Art, purportedly said he would sometimes visit MOMA just to study that one painting alone.

Christina’s World is undeniably the image that made Wyeth famous, but other works  – A Crow Flew By; The Clearing, the portrait series known as “The Helga Pictures,” portraits of Siri Erickson; Snow Hill, Wyeth’s Chadds Ford models, living and dead, dancing on Kuerner’s Hill; delicate gems of watercolors such as Winter Bees; portraits of his friends who lived in “Little Africa,” painted with dignity and respect in keeping with the Civil Rights movement, happening at the very same time  – also support what Life magazine said of the artist in 1948:

“If there is such a thing as a purely American tradition in Art, it is represented at its best in the straightforward canvases of Andrew Wyeth.”

Touring room after room, we were fully engaged in Wyeth’s art and the stories they tell of place and people, many of whom became famous for the simple fact of being his models. 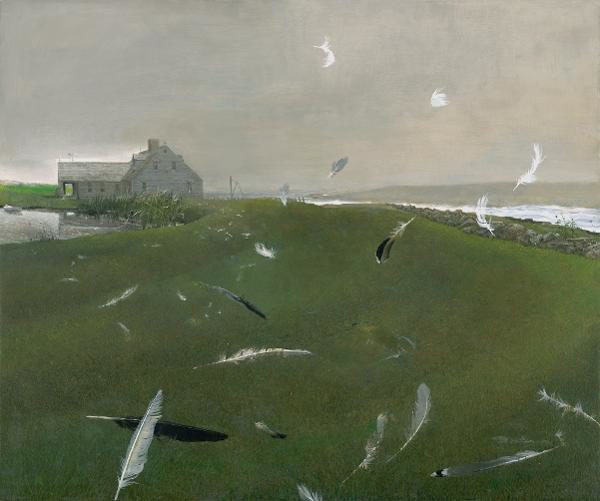 And while it is true the artist is a hard-core realist and that his palette tends towards bleak earth tones, (which naysayers have disparagingly described as “baby poop” and “mud”), it is worth noting that when Wyeth first began making art in around 1937, his bravura, lyrical watercolors of beaches in Maine featured the intensely beautiful colors of the land and the water. 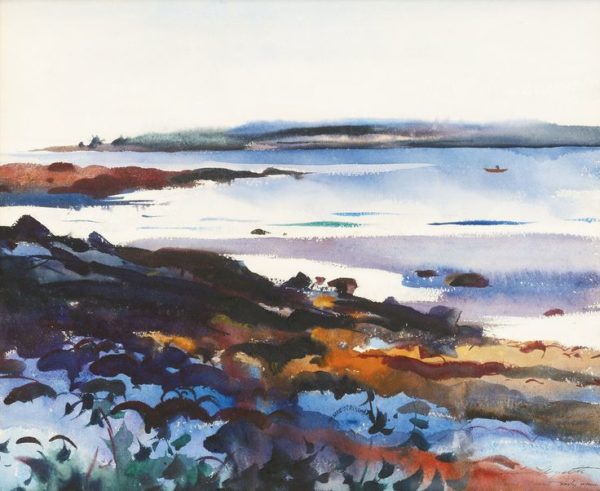 But is does seem that after his father, illustrator N.C. Wyeth died an unkind death in 1945  – his car got stuck and he was killed by a train –  color seemed to have been drained out of the young Wyeth. From then on, his palette was subdued, his images, however, portraying a wide spectrum of emotions from abject loneliness to a dignity that comes from self-awareness and acceptance. 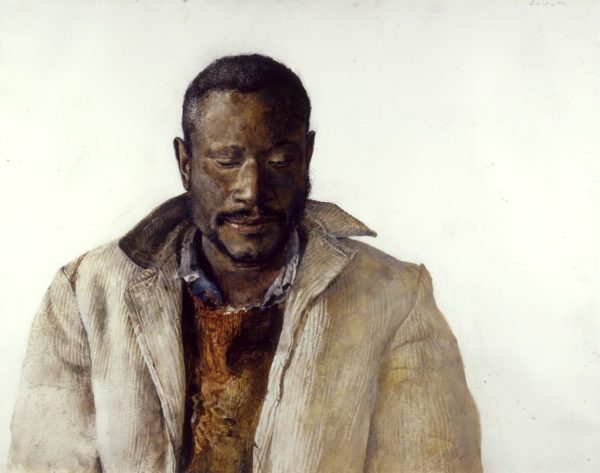 And today, as the crowds at the show at SAM suggest, Wyeth’s star is on the rise again, in part thanks to his many fans, the ones who remained devoted, plus adventurous young artists of today interested in exploring themes of racial discrimination, politics, cruelty, and mortality, issues Wyeth addressed so beautifully in his work. Issues beyond mere shapes and forms that were the essence of the art-for-art’s-sake engine, the cri de coeur of the art world in 20th century.

And for the record, legions of young critics and art historians are in lockstep with those fans and emerging artists. For them, for us, Andrew Wyeth is an original and important figure in art history, whose images have had a profound influence not just on painting, but also, as is pointed out in every room of the show, in the worlds of photography and filmmaking as well.