Telluride’s middle school thespians will bring the whimsy and humor of Dr. Seuss to the stage this weekend with performances of “Seussical the Musical.” The play, directed by new SAF Young People’s Theatre Director Leah Nikula, will be performed Dec. 1-3 at 6 p.m. nightly at the Sheridan Opera House. Tickets are $13 for adults; $11 for kids 12 and under and free for lap children. 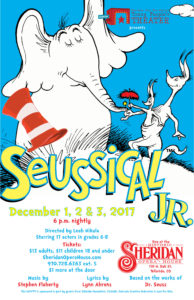 The SAF Young People’s Theater returns for the 2017-2018 school year with its annual middle school production live at the historic Sheridan Opera House. This time, the troupe will be channeling the stories and spirit of Dr. Seuss.

Based on several of Dr. Seuss’ beloved children’s books, “Seussical the Musical” stars 17 actors in grades 6-8 and is directed by the YPT’s new Artistic Director Leah Nikula, who took over the program in June.

“This is one of my favorite musicals of all time,” Nikula said. “It’s a show that resonates with all ages.”

“Seussical” tells the story of the kind and loyal elephant, Horton (played by Kaizer Gorraiz). While taking a bath in the Jungle of Nool, Horton discovers a dust speck that is carrying the entire planet of Who. Much to the relief of all Whos, Horton vows to help them and keep them safe; after all, “a person’s a person, no matter how small.”

While protecting the Whos, Horton learns the importance of standing one’s ground, true friendship, selflessness, and staying faithful that kindness and good will always win. Along the way, one particular bird, Gertrude McFuzz (played by Juliet Denman), notices Horton’s “kind and powerful heart” and does everything in her power to help Horton protect the Whos.

Horton is joined on his adventures by the Cat in the Hat (played by Virginia Wilkes), Jojo (played by Holden Coppage), Mayzie LaBird (played by Haley Bracket), Sour Kangaroo (played by Kassidy Atherton) and Mr. & Mrs. Mayor (played by Jack Spencer and Maya Geiger).

“The play weaves the themes of loyalty, bullying, vanity, kindness, commitment, and trust together by tying Dr. Seuss’ most famous characters into a story that won’t leave a single eye dry in the audience,” Nikula said.

“Seussical” was written by the famous musical duo, Stephen Flaherty and Lynn Ahrens, whose other works include “Once On This Island,” “Ragtime,” and “Anastasia.”

For tickets and more information visit www.SheridanOperaHouse.com or call 970-728-6363 ext. 5.