The German art critic Karl With, who published a life of Marc Chagall in 1923, began his book with two definitions: “Chagall is Russian” and “Chagall is an eastern Jew (Ostjude).”

The author went on: “One part of him is reserved . . . melancholic and eaten up inside by burning passion . . . The other side of him is sensual, worldly, sensory, baroque, and blooming. He is lithe as an animal, agile, given to tantrums like a child, soft and charming, amiably sly mixed with a peasant-like coarseness and the delight of a provincial in everything colorful, dazzling and moving.”

Everything colorful, dazzling and moving like ballet and opera, as evidenced in a show at the Los Angeles Country Museum entitled “Chagall: Fantasies for the Stage,” (through January 7).

We are talking eye candy in the very best sense by a man who, according to his biographers, embodied contradiction: Chagall was an introvert who delighted in the world. He was a dreamer and a manipulator. He was instinctively selfish, yet lavishly kind with his eye.

In the Hasidic tradition, music and dance are pathways to God – hence all those fiddlers on roofs. In a video, Chagall’s daughters explain their father, however, could not sing. Instead – paintings, drawings, elaborate costumes, etc. – were the way the artist gave voice to spiritual ecstasy.

Which translates to an ecstatic experience for Chagall’s growing fan club. 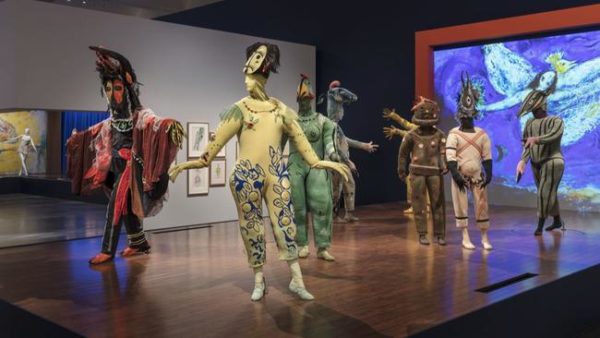 Installation photo of “Chagall: Fantasies for the Stage,” at LACMA. (Fredrik Nilsen)

Chagall: Fantasies for the Stage highlights the principal role that music and dance played in Chagall’s artistic practice. The performing arts were a significant source of inspiration for Chagall throughout his long career: he depicted musicians in many of his paintings, collaborated on set designs for the Ballet Russes in 1911, created murals and theatrical productions for the Moscow State Jewish Theater in the 1920s, and designed costumes and monumental sets for ballet and opera in the 1940s, 1950s, and 1960s.

The exhibition concentrates on Chagall’s four productions for the stage—the ballets Aleko, set to music by Pyotr Tchaikovsky (1942), The Firebird by Igor Stravinsky (1945), Daphnis and Chloé by Maurice Ravel (1958), and Wolfgang Amadeus Mozart’s opera The Magic Flute (1967). The exhibition features the artist’s vibrant costumes and set designs—some of which have never been exhibited since they appeared on stage—and also presents a selection of iconic paintings depicting musicians and lyrical scenes, numerous works on paper, and documentary footage of original performances. In bringing these pieces together, Chagall: Fantasies for the Stage communicates the moving and celebratory power of music and art, and spotlights this important aspect of the artist’s career.

And here’s great review by Liesl Bradner for the Los Angeles Times:

As a child growing up in the Hasidic Jewish enclave of Vitebsk, Russia, Marc Chagall aspired to be a singer, dancer, violinist and poet. Reflecting the desires of his youth, the artist often depicted musicians and performers in his paintings.

His set designs and costumes from four theatrical productions — the ballets “Aleko,” “The Firebird” and “Daphnis and Chloé,” and the opera “The Magic Flute” — are the subject of the upcoming exhibition “Chagall: Fantasies for the Stage” at the Los Angeles County Museum of Art. The show was adapted from a presentation at Montreal Museum of Fine Arts by LACMA’s Stephanie Barron and the costume and textiles department.

“I was really struck with the designs and costumes he did starting in the early 1940s,” Barron, senior curator of modern art, said of these lesser-known aspects of Chagall’s oeuvre.

After fleeing Nazi-occupied France with his family, Chagall received a commission from the Ballet Theatre of New York (now American Ballet Theatre) to create the scenery and costumes for “Aleko.” Based on an 1824 poem by Alexander Pushkin, the ballet premiered in Mexico City and later at the Hollywood Bowl in summer 1943.

“At this point he was actually hand-painting on the fabric for the costumes,” Barron said. His designs for “Aleko” mixed traditional Mexican styles with Russian folklore.

For the 1945 production of Igor Stravinsky’s “The Firebird,” at the Metropolitan Opera House in New York and the Shrine Auditorium in L.A., Chagall envisioned more experimental and avant-garde designs, opting for heavy, richly colored fabric and intricate embroidering…