The focus of the Nelson-Mapua-Tasman Bay leg of our New Zealand adventure was people as much as places and things – including a few Telluride locals. Peeps more than sheeps. And enhanced eco-awareness thanks to Stew Robertson of Open Your Eyes Eco Tours the Abel Tasman Tree Collective. Scroll down for what to do, where to stay & more. (Photos by Clint Viebrock.) 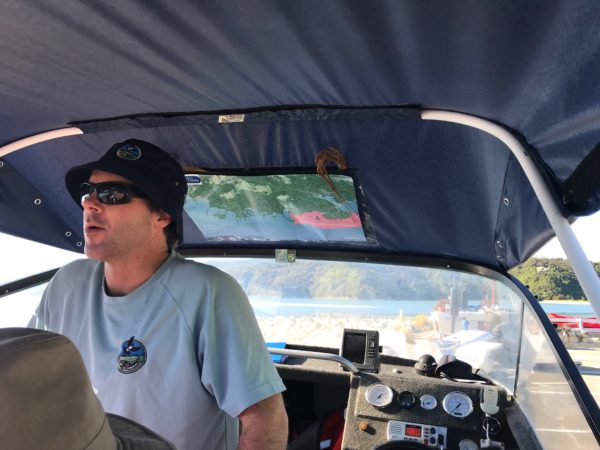 Marine biologist Stew Robertson of Abel Tasman Eco Tours. On duty on his boat, touring and teaching us about his passion, the Bay.

WOW and the Telluride connection: 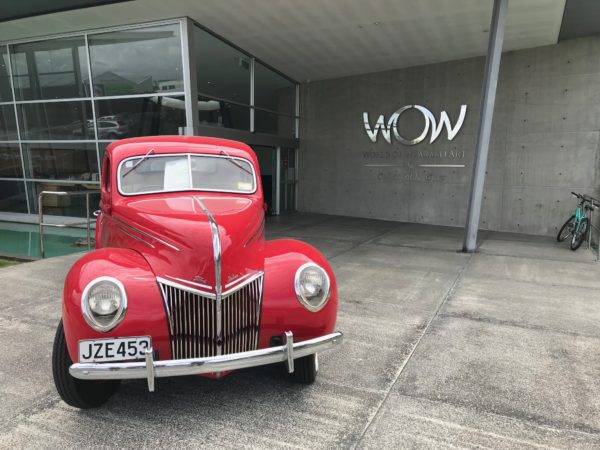 At WOW, anything goes as long as its original, beautifully designed and well-made.

Finalists from all over the world compete at WOW for over $170,000 in prize money, plus unique experiences with leading creative companies such as Weta Workshop and Cirque du Soleil. Prizes including the Supreme Award (NZD$30,000); an artist residency at Cirque du Soleil (Montreal); and an internship with Weta Workshop (Wellington).

(It was Weta that worked with Sir Peter Jackson and Te Papa to create the must-see Gallipoli tribute up now at the museum in Wellington.) 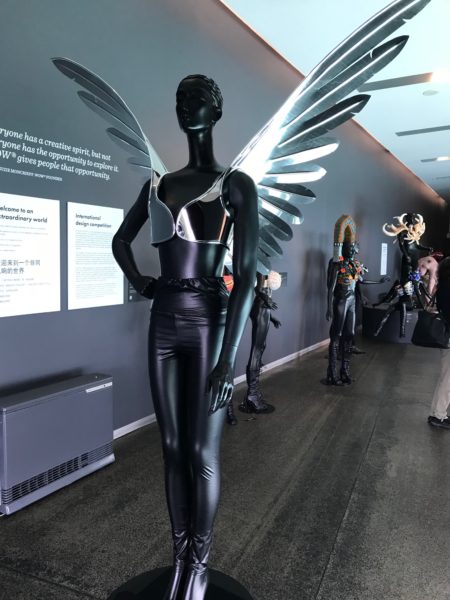 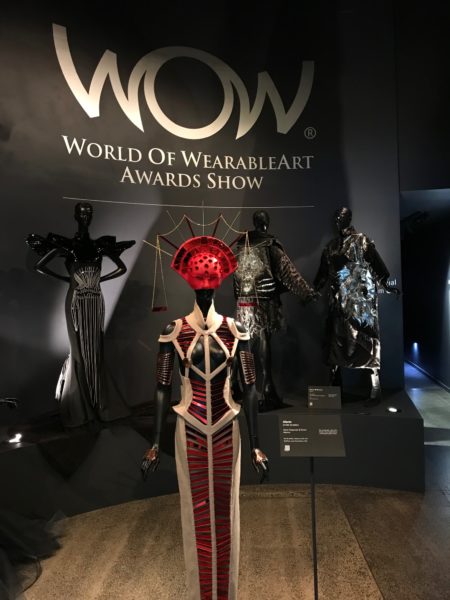 WOW, a group of winning garments as art.

Now in its 29th year, WOW is New Zealand’s single largest annual theatrical show, a no-miss event for over 60,000 people each year.

Past WOW competitors include – drumroll please – two Telluride homegirls: Amy Jean Boebel and Sue Hobby. Check out our story on the ladies here.

Thanks to the efforts of Jo (?) and her colleagues at the front desk at WOW, we were able to find Amy and Sue’s creations in the 2009 and 2011 catalogs. 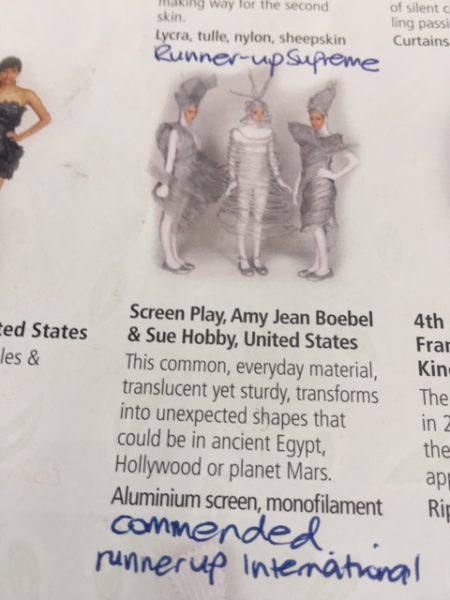 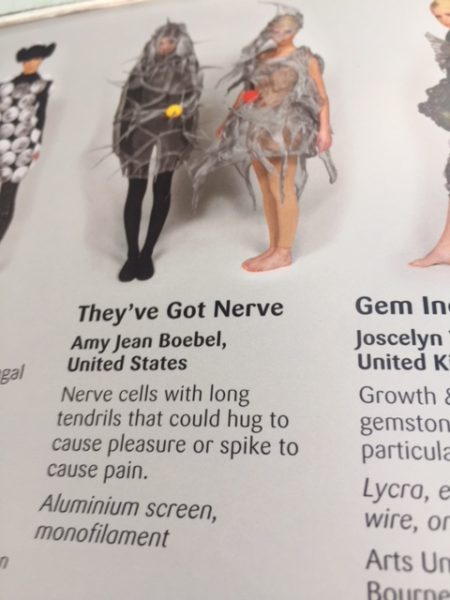 Until 2004, WOW was staged in Nelson. In 2005, the spectacle moved to a larger playground in New Zealand’s capital of Wellington, however, creations from past competitions have a permanent home in the southwest suburbs of Nelson at the iconic World of Wearable Art and Classic Car Museum, the “his and hers” venue where we spent our first morning in the South Island’s northern tip.

Mike Wilson runs Cartel Works, according to its website, a company that brings together “like-minded people to celebrate the thrills, excitement, and joys of driving.” 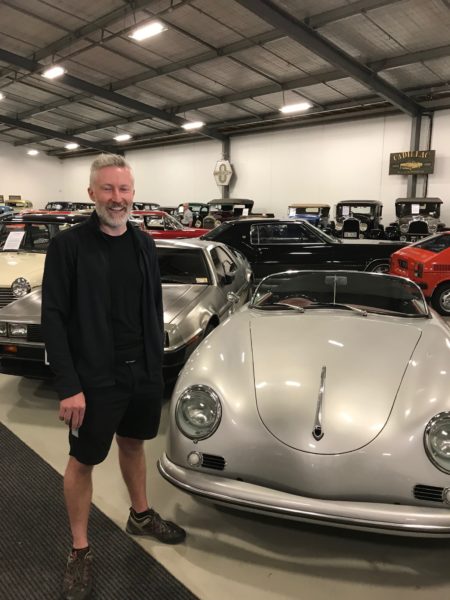 Mike Wilson of Cartel manages car museum at WOW, standing next to his baby, a Speedster, update of an original Porsche.

Mike told us his company took over the management of the car museum from Victory Car Limited in April 2017. He now manages the car museum, which means restoring and maintaining an eclectic mix of immaculately presented vehicles, including all-American beasts from Detroit, staged in an imaginative setting that includes themed sets and theatrical lighting. 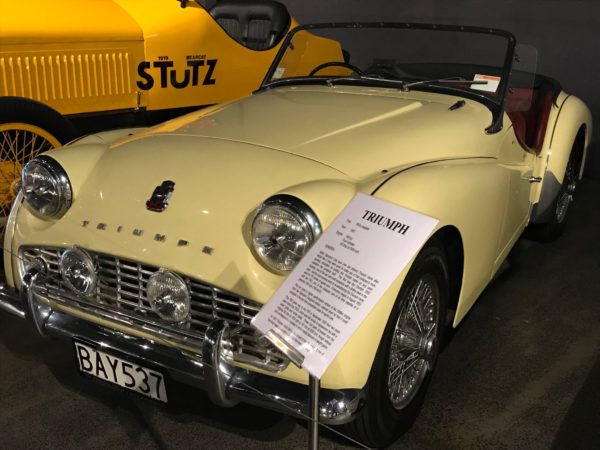 Carpe diem: At the car museum, kicking the tires can take on a whole new meaning. You could wind up the proud owner of the fiberglass Speedster that Cartel Works is building on site. The sexy machine, Mike’s baby, is a replica of the original Porsche Speedster from the 1950s, also on display. 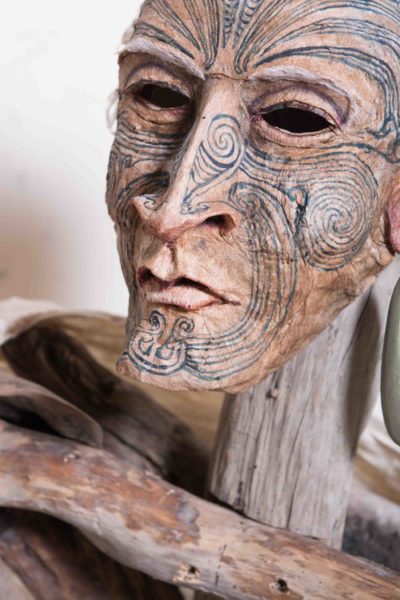 The Dutch bought Manhattan Island from the Lenape Indians for 60 guilders or, in today’s money, about $34.

Then, in 1778, the newly formed United States entered into the first of its approximately 400 treaties with Native American tribes on its march to a Manifest Destiny. A tribe would typically agree to keep peace with settlers and recognize the jurisdiction of the United States government over its lands in exchange for cash, goods, and medicine–as well as federal military protection. Under the United States Constitution, treaties with Indian tribes were as legally binding as agreements with other nations, a policy that continued until 1871–though many, if not most, treaties were entered into under false pretenses or were broken.

Australia’s slavery started because other countries abolished the institution: aboriginals were railroaded and used in the pearling, sugar cane and cattle industries.

Throughout history exploitation of indigenous cultures is academic. And epidemic. One role of fine art is to hold up a mirror to the world, make us al see what we might want to look away from. 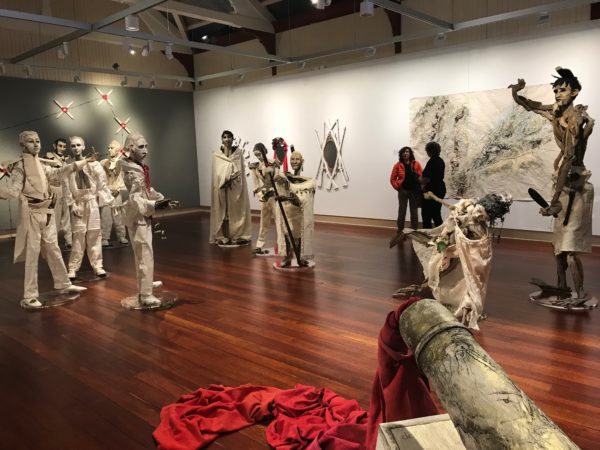 Nelson-based artist Sally Burton does just that in a brilliant show,”Pale History,” a piece of frozen theatre – and a gut punch – which captures an infamous moment of exploitation gone incendiary, then viral. The mixed-media exhibit is now up at Nelson’s handsome, beautifully curated Suter Gallery (through March 2018).

In New Zealand in 1843 – just three years after the signing of the infamous Treaty of Waitangi – 26 people died in The Wairau Incident near Nelson. It was first major confrontation between Maori and Pakeha (or European) settlers following the signing.

Now, 174 years on, Nelson artist Sally Burton, parenthetically an advisor to WOW, recreated the moment when a shot was fired, killing a member of Te Rauparaha’s family or huga. That incident in turn led to the death of another 25 people. Many more confrontations and death followed.

Burton’s work captures the moment by depicting the key players in the cast of characters, all fashioned out of found wood and tricked out clothing made from tapa cloth or the inner bark of several types of trees and shrubs.

The Suter cafe is also a no-miss. Enjoyed a great lunch there before touring the museum.

A bit about the Suter:

The Suter Art Gallery or Te Aratoi o Whakatū is a memorial to the second Bishop of Nelson, Andrew Burn Suter (1830-1895). Bishop Suter and his wife Amelia travelled to Nelson in 1867 to lead the Anglican diocese and they became major figures in early Nelson society. In addition to his official duties, Bishop Suter also busied himself with artistic pursuits as a recreational painter and collector of art. In 1889 he established the Bishopdale Sketching Club, now the Nelson Suter Art Society. 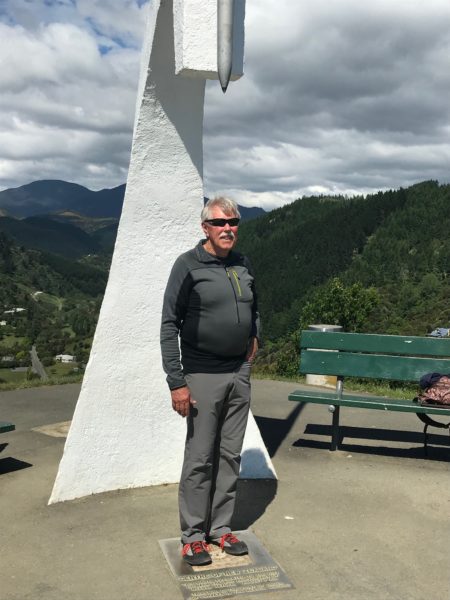 The Centre of New Zealand is so named because back in the 1800s, it was a central survey point of the country. We walked just a few blocks from the Suter to Botanical Hill at the Reserve, the site of the first rugby game ever played in New Zealand, making our way to the top, a short, steep climb that took us about 20 minutes. 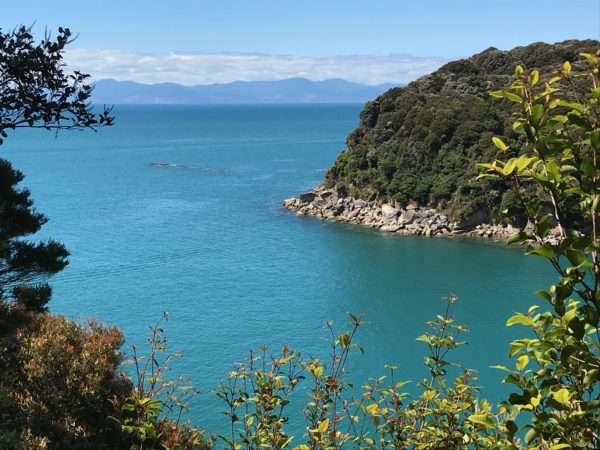 Bottlenose dolphins (Tursiops truncatus) have a relatively short beak and a high, hooked, prominent dorsal fin. They are dark or light grey on the back grading to white on the undersides, although their color and shape can be variable.

Bottlenose dolphins are particularly susceptible to human impacts due to their coastal nature.

And we were particularly susceptible to the pod of about 30 bottlenecks which chose to swim with our boat and perform, Rockettes-style, what appeared to be well-choreographed dance of jumps and spins. 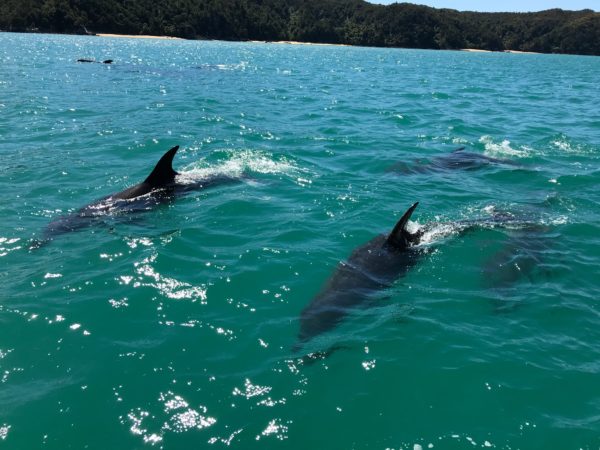 Dolphins, new besties. (Stay tuned for Clint’s video of them “dancing” for us.)

Our guide on our all-day tour of Tasman Bay was marine biologist Stew Robertson, also the owner-founder of Open Your Eyes Abel Tasman Eco Tours.

Stew let us know what we witnessed was not an everyday occurrence in those waters. Apparently there is no app (yet?) that allows anyone to conjure dolphins on demand. Weeks can pass, he told us, before dolphins (and sometimes whales) surface in the Bay.

Luck be a lady. 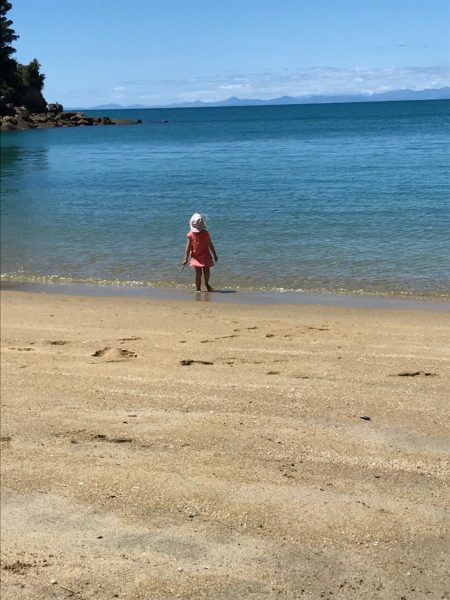 Exactly as Stew’s website promises, we spent too short a day – about 6.5 hours – with a small, tight group of fellow eco-adventurers, including an Asian couple from the Netherlands and a German couple traveling with their babies, a 4 1/2-year-old daughter and a one-year-old son. (“Good on them” as the locals say.)

Then again, the dolphins proved to be a universal equalizer: we all squealed with delight like the kiddos.

For a passionate scientist and environmentalist like Stew, all of the Tasman Bay’s indigenous flora and fauna are intimates: seals, shags, (the flightless) waka, bellbirds, whitebait, karnataka, kawakawa, black beech and milk trees, manuka honey bushes (for many farmers, a variation on the theme of the 1860s gold rush), the list goes on and on.

And everything needs preserving and protecting. 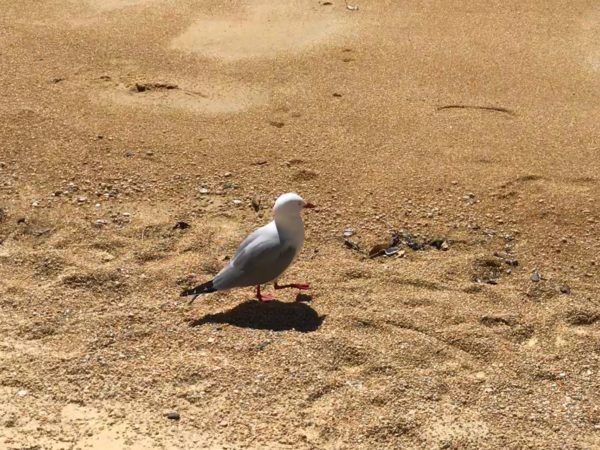 As Stew explained, the arrival of new species to New Zealand occurred quite suddenly, coming first with the Maori around 800 years ago, then with the Europeans starting with Captain James Cook in the 18th century.

The Europeans brought the rest: sheep, goats, pigs, rabbits, dogs to make everyone feel at home; brush-tailed possum to create a fur trade; other pests-predators like rats, stoats and weasels, which thrived on goodies like kiwi.

Thorny thickets of gorse, a bush commonly used for hedging, thrived in the country’s climate, spreading like wildfire over cleared land, crowding out native vegetation. In Tasman Bay, environmentalists like Stew are attempting kill off the bush by planting trees around it. The trees shade the gorse, which dies without enough sun.

Major efforts to undo the damage of colonization are underway all over the South Island.

Stew Robertson is a kid in a unique candy store – Tasman Bay. He is also a man with his hair on fire about restoring the natural habitat of the South Island, his passion. One of his current fixations – he has other conservation projects up his sleeve – is the aforementioned Abel Tasman Tree Collective. 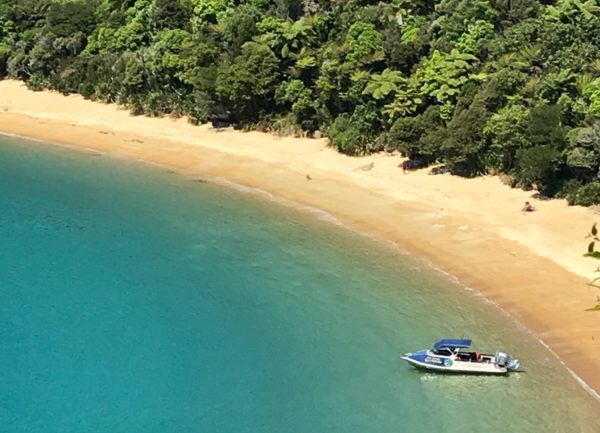 Tasman Bay, Stew’s boat parked in a cove for a lunch stop and hike.

Where to stay, eat, in Nelson-Mapua region:

Our stay at the Accent House B &B in Mapua was one of our favorite digs to date. That is not just because of the beautifully appointed accommodations or the tranquil setting, an acre-and-a-half of green in that quiet suburb of Nelson. Owners Sharon and John are not your garden variety innkeepers. 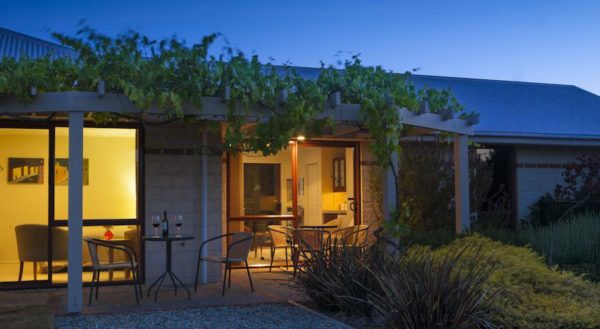 Accent House B & B 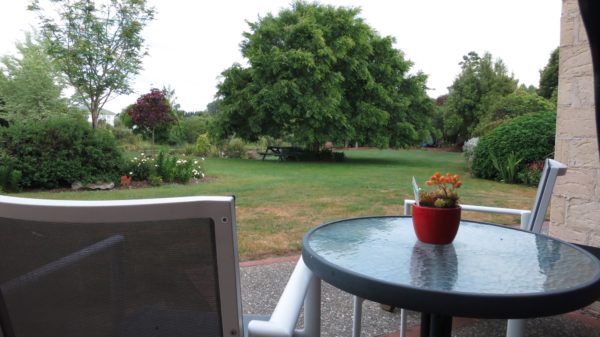 Sharon has a background in finance; husband John is a very successful entrepreneur – and a car hound. They are both smart, funny, warm, welcoming, deeply informed about the surroundings and determined to make good even better.

Accent House is a B & B with a side of itinerary. It is thanks to our gracious hosts our stay in Nelson-Mapua was as rich as it was.

And if you ask nicely, as an a la carte bonus, you might get a ride (like Clint did) in John’s Morgan, part of his growing classic car collection.

(Sharon and John are completing construction on a barn allegedly to better serve the biking community, especially in the height of that season in April or our fall. But Sharon believes the extra building on campus is really for more vehicles.) 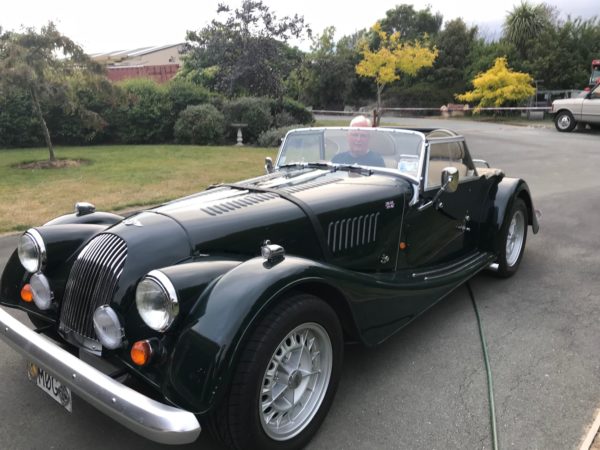 Accent House, a man and his Morgan.

In Mapua, don’t miss a dinner at the Boat Shed, a funky watering hole at the end of a dirt road that runs through the site of a former, infamous nudist colony.

We also enjoyed the Jellyfish Restaurant & Bar on the Mapua Wharf.

Nelson, as mentioned, was just a lunch stop, but the Suter Cafe is great.