The Sheridan Arts Foundation, the non-profit organization that owns and operates Telluride’s historic Sheridan Opera House, presents Victor Wooten Trio live in concert on Sunday, January 21, 2018. Show time at 9 p.m.; the new SHOW Bar and doors open at 8 p.m. Tickets are $25 GA on the floor; $35 reserved seats in the balcony. A $4 ticketing fee applies at all sales outlets. Tickets and additional event information are available at sheridanoperahouse.com or 970.728.6363 x5.

Scroll down to listen to the Victor Wooten Trio in action. 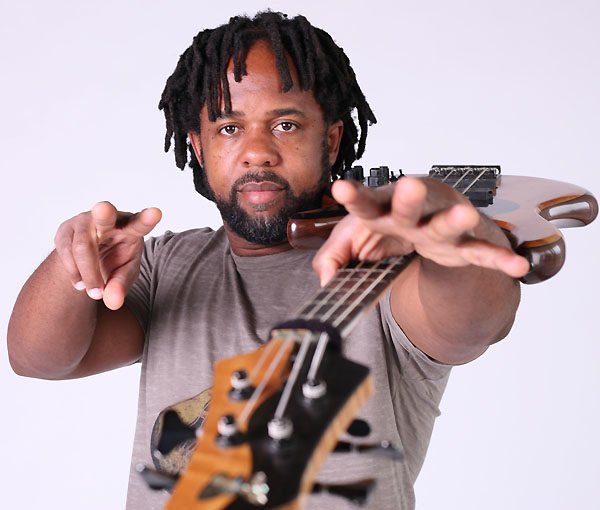 So said Victor Wooten as he began his commencement address to the Class of 2016 at the University of Vermont’s Rubenstein School.

That was his way of explaining why he was not going to recite the speech he had written out for the occasion. Instead, for 24 minutes, he shared his thoughts with the graduates about life, success and challenge and meaning, all while accompanying his words on the bass guitar strapped across his shoulder.

Wooten played and spoke freely, gently and eloquently. He took his audience back to a bit of wisdom he and his brothers had received from their mother back when they were just beginning to demonstrate the talent that would culminate years later in worldwide recognition as the Wooten Brothers.

As he improvised a four-string soundtrack to frame and channel his ideas, Wooten expanded on the lessons he had imparted: “We’re already born special. … In the history of humankind, your fingerprint has never been here and will never be here again. … No one can take that away from you. Your job is to improve on that specialness and present it to the world …”

Such moments, whether witnessed that night in Burlington or later on YouTube, surely changed lives. They also capture what Victor Wooten really does best. Better even than his revolutionary technique is his conceptual redefinition of the bass guitar’s role.

How can that be? What Wooten did with bass has almost no parallel in modern music. From Coleman Hawkins to and beyond John Coltrane, the great saxophonists approached their instrument more or less the same way. Ditto with Louis Armstrong and Miles Davis, Ray Brown and Esperanza Spalding.

Not so with Wooten. After him, every bassist in the world began to think differently, much as guitarists did after Hendrix. Young bassists now start from a different set of assumptions than their predecessors did a generation ago. Wooten’s blazing, percussive chops lit a fire for many of them, as did his explorations of melody, nuance and phrasing.

But Wooten might smile when reminded of the old parable about the wind and the sun competing to see who might force someone they had focused on to remove his coat as he went walking one day.

The wind whipped the poor guy mercilessly, blowing harder and harder, but he simply wrapped himself up tighter and refused to let go.

Then the sun took over, bathed the man in warmth — and the jacket was off.

So, yes, this is what Victor Wooten’s forte and calling, whether speaking in Burlington, working with kids at his Center for Music and Nature at the 147-acre Wooten Woods retreat in Tennessee, or outlining his philosophy of music in a novel, “The Music Lesson: A Spiritual Search for Growth through Music,” now a part of the curriculum at The Berklee College of Music, Stanford University and other prestigious institutions.

And of course Wooten continues to inspire through his work.

Not surprisingly, themes from his life thread through TRYPNOTYX, tying virtuoso performance and life experience together. Winslow’s voice and sound effects conjure James Brown and pop throughout the sizzling “Funky D Mix” and recall the night that a kindergarten-aged Wooten saw the Godfather of Soul on stage for the first time. And in “Cupid,” through bucolic textures, a sylvan flute, and spoken exchanges involving Wooten and his children, the horrors of war give way to the promise of redemption through love and music.

“Music is a great way — and a safe way — to teach just about any life principles,” Wooten insists, one afternoon at a table outside of a Nashville cafe. “To be in a band, you have to listen to each other. Bands are at their best when every instrument is different, not the same. Everyone takes turn talking. Everyone speaks their voice. A lot of times musicians might ask, ‘What would you like me to play?’ I say, ‘Listen to the music. The music will tell you exactly what it needs.’”

Listening was always essential to Wooten.

As the youngest of five talented brothers, he listened to the music they loved and to the instruction his brothers offered as he began exploring the bass. He didn’t know it at the time but this sibling input helped free him from preconceptions.

“I learned to speak music the same way we learned to speak English,” he says. “No one sits you down and says, ‘Here’s the role of your voice. Learn these words. Go and practice.’ No, you just talk, and your parents allow you to talk even though you might speak ‘incorrectly.’ You do that for years before you learn about grammar. I learned music the exact same way.”

With his imagination freed up, Wooten saw no reason why he couldn’t apply what his brothers were doing on other instruments to his bass.

“I saw my brothers’ instruments on my instrument,” he says. “For example, I started learning Roy’s drum licks and solos on the bass. I heard bass lines in his drumming. Later, when I learned what we now call slapping — we called it thumping then because that’s what [Sly Stone’s bassist] Larry Graham called it — that gave me the power but not the speed to play a Billy Cobham drum fill. So my brother Regi showed me how to use my thump to pick up and down. That opened a portal in my brain. Then when you add multiple plucks and left-hand hammers, all of a sudden you’re using ten fingers, man!”

Wooten was just two-years-old when he played his first gigs with the Wooten Brothers Band — Regi on guitar, Roy a.k.a. “Futureman” on drums, Rudy on sax and Joseph on keyboards. They opened West Coast shows for Curtis Mayfield, War and other headliners, nearly scored a major label deal until someone there said there was room for only one five-brother act. The other act just happened to be The Jackson 5. But that didn’t stop the five Wootens from pushing against convention.

Settling eventually in Nashvillewhere he connected with the like-minded banjoist and composer Béla Fleck, Wooten has earned five Grammy Awards, been honored three times by Bass Player Magazine as Player of the Year and is included in Rolling Stone’s selection for “Top 10 Bassists of All Time.”

What really matters, though, is the example Wooten sets in his dedication to music as a means to enhance the human condition even for those who may never master an instrument.

“Music shouldn’t be just about music,” he emphasizes. “Music should be about something greater. If all you do is music, what is your music about? You’ve got to have a life. You’ve got to have experiences. You’ve got to fall in and out of love. Getting away from your instrument and out into the world, you can see how the little bird gets up and sings — not to get paid but just because the sun is rising. You go outside to get more inside who you really are.”

At this point, a young student comes up to our table, apologizes for interrupting, takes a second to thank Wooten for all that he has done to move so many through his music.

Wooten smiles gratefully. They speak for a few moments. Then the student moves on, like those graduates in Vermont, a little wiser and warmer than before.

“That,” Wooten concludes, “is what it’s all about.”

The Sheridan Arts Foundation was founded in 1991 as a 501(c) (3) non-profit organization to preserve the historic Sheridan Opera House as an arts and cultural resource for the Telluride community, to bring quality arts and cultural events to Telluride and to provide local and national youth with access and exposure to the arts through education. The Sheridan Arts Foundation is sponsored in part by grants from the Telluride Foundation and CCAASE.