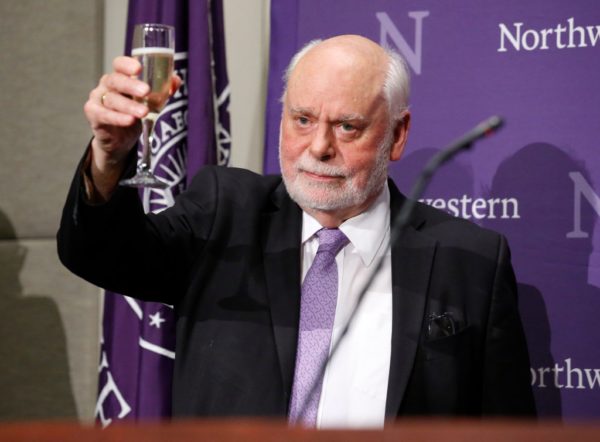 Sir Fraser Stoddart won the 2016 Nobel Prize in chemistry for the design and synthesis of molecular machines – not bad for a man who for, the first 18 years of his life, was raised without electricity on a rented farm in Scotland.

Prior to World War II, there was very little communication with the outside world, but many things changed for Stoddart’s family  – and for the world – after the conflict.

“Agriculture post World War II in the UK and Scotland… was undergoing an incredible revolution, the first images I saw as a little boy from my window were horses and carts, that was 1945-1947 and that integrated to tractors and cars and all sorts of farm implements… Life was no longer labor intensive,” said Stoddart. “From using the human body and animal power to creating machines to do the work for us. All starting from the invention of the most simple machine; the wheel. The Wheel has allowed the timeline of machinery to progress through the ages.”

Since he was an only child, Stoddart’s parents were very supportive of his education – though it was not just book learning in a school setting that set him on an illustrious path. His ability to multitask and juggle jobs on the farm  – anywhere really – also figured into the picture, helping a curious young man evolve into a brilliant, Nobel Award-winning scientist.

“I got involved in chemistry in what Americans call junior year (university) one of the professors was teaching a practical class in quantitative analytical chemistry, something like using a sample of steal and coming up with how much iron was in it… ,” explained Stoddart. “He made two comments to the class of about 150 of us… You will be all the better with your open mouth far from the desk, there’s enough cyanide to fill all of Edinburgh. Next, he said rather arrogantly, it’s a 10- week course and nobody has ever finished it. I said to myself I’ll show him – and finished in seven weeks. The reason I was able to do that was because of what I had learned on the farm: I didn’t sit there and do one experiment then another and another; I did three at once.”

Stoddart also understood that the march of technology is all about identifying design flaws and making the necessary improvements: the inefficiencies of the steam engine ultimately led to rocket engines and all-electric vehicles.

What is a molecular machine?

A molecular machine, nanite, or nanomachine, refers to any discrete number of molecular components that produce quasi-mechanical movements (output) in response to specific stimuli (input). For such machines to function, its parts must be able to move relative to each other.

Fraser Stoddart contributed to the development of molecular machines by developing a “rotaxane” in 1991. A ring-shaped molecule was threaded over another molecule that functions like an axle in a controlled manner. Working with a partner, Jean-Pierre Sauvage, Stoddart created the world’s first molecular motor, a tiny blade that rotates on an axis.

“They are either natural or synthetic molecules that convert chemical energy into mechanical forces and motion. An example of a biological motor is the protein kinesin, which uses the hydrolysis of adenosine triphosphate to move along microtubule filaments.”

Molecular machines are the smallest machines in the world and they act like the superman of ants, bending and moving things hundreds of time heavier than themselves. Such machines can move in defined directions and are about 1000 times thinner than that of a human hair!

There are still many challenges around these machines moving people to question their usefulness. Currently they are basically just molecules swimming around in a solution, driven by sunlight and electricity.

In the future, however, Stoddart and his colleagues are betting molecular machines will be used for creating new materials, sensors, and energy storage systems – though, as we said, those technologies are not available yet.

However, just as many stood puzzled to the future uses of electric motors and steam engines, there is a huge potential for a revolution based  on molecular machines.

As stated by the Nobel committee, “In terms of development, the molecular motor is at about the same stage as the electric motor was in the 1830s, when researchers proudly displayed various spinning cranks and wheels in their laboratories without having any idea that they would lead to electric trains, washing machines, fans and food processors…”

Molecular machines could very well have as a great of an impact as the electric motor and given time, they will be able to work inside the human body. Scientist are anticipating these nano-machines might deliver drugs directly to cancerous cells or other specific areas of tissue.

Molecular machine research is already impacting other areas of technological development. Stoddart, a Twitter fanatic, received the following comment about one of his posts involving his machines:

“Your research on molecular machines has strengthened the development of nanobots, also it will help us develop swarm intelligence in nanobots, to the extent it can control the number of bots.”

Molecular machines should have many applications in the near future.

Stay tuned – and also listen to what Sir Fraser Stoddart has to say to get a clue.

TSRC Town Talks are free public presentations by world-renowned scientists on topics of great current importance in science, technology, education, and public policy. Each scientist talk is followed by an interview and Q&A session moderated by Emmy and Peabody award-winning television correspondent and professor emerita of broadcast journalism at USC’s Annenberg School of Communication and Journalism, Judy Muller.

With a network of over 5,000 preeminent scientists from over 90 countries and 500 institutions, TSRC generates the fundamental knowledge-base for new solutions in many fields including energy, medicine, water, climate, national security, and advanced materials for computing and manufacturing.

To learn more about TSRC and the capital campaign to purchase the Telluride Depot as TSRC’s permanent home, visit telluridescience.org.