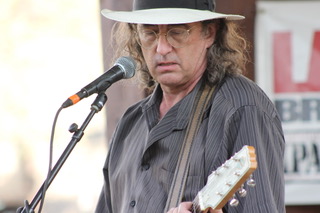 His music tells the story.

It’s not high count cotton sheets and an international menu that define his dream place. It’s the forgotten corners, the forgotten people that populate his music. You could say that it’s all politics, but McMurtry’s music, the writing and the performance, is not to be pretty, but to tell it like he sees it.

It would be fair to say that McMurtry’s songs lament the losses when a place or a population gets cleaned up for general acceptance.

For an example, listen to “Forgotten Coast” from James McMurtry’s 2015 album Complicated Game.

Check out this chorus:

no one’s gonna find me there

with my steel guitar and my rocking chair

among the seafood shacks and oyster boats

I’ll hide out on that forgotten coast

In McMurtry’s own words: “It’s also a little about the big old world versus the poor little farmer or fisherman.”

His work is even rougher and more unpolished than that of Woody Guthrie, but it covers some of the same ground Guthrie plowed decades ago.

James McMurtry can also throw in a lament about success in today’s terms and the price it exacts, as in his “Long Island Sound” from the same album.

It’s been too long since James McMurtry played Telluride.

Personally I can’t wait to hear him again at the Sheridan Opera House on July 23.

Do yourself a favor: Be there.

Now check out our interview with James McMurtry.

James McMurtry’s critically lauded first album Too Long in the Wasteland (1989) was produced by John Mellencamp and marked the beginning of a series of acclaimed projects for Columbia and Sugar Hill Records.

In 1996, McMurtry received a Grammy nomination for Long Form Music Video for Where’d You Hide the Body. Additionally, It Had to Happen (1997) received the American Indie Award for Best Americana Album.

In 2004, McMurtry released the universally lauded Live in Aught-Three on Compadre Records. The following year, Childish Things notched arguably his most critical praise, spending six weeks at No. 1 on the Americana Music Radio Chart in 2005 and 2006.

In September 2006, Childish Things and “We Can’t Make It Here” won the Americana Music Awards for Album and Song of the Year, respectively.

The poignant lyrics of his immense catalog still ring true today. In 2011, “We Can’t Make It Here” was cited among The Nation’s “Best Protest Songs Ever.”

“‘We Can’t Make It Here,’” Bob Lefsetz wrote, “has stood the test of time because of its unmitigated truth.”

The Washington Post notes: “Much attention is paid to James McMurtry’s lyrics and rightfully so: He creates a novel’s worth of emotion and experience in four minutes of blisteringly stark couplets. What gets overlooked, however, is that he’s an accomplished rock guitar player … serious stuff, imparted by a singularly serious band.”

The Sheridan Arts Foundation was founded in 1991 as a 501(c) (3) non-profit organization to preserve the historic Sheridan Opera House as an arts and cultural resource for the Telluride community, to bring quality arts and cultural events to Telluride and to provide local and national youth with access and exposure to the arts through education. The Sheridan Arts Foundation is sponsored in part by grants from the Telluride Foundation, CCAASE and Just For Kids.