David Holbrooke designed “Original Thinkers,” Thursday, October 4 – Sunday, October 7,  as “a new, highly curated festival that melds speakers, films, and performance into a powerful four-day experience in Telluride.” According to Holbrooke, “The scale of the world’s problems we face feels overwhelming. We’ve started Original Thinkers to give a platform to the people and ideas that, despite all the odds, keep trying, keep working, and keep dreaming big.” (Go here for more on the long weekend.) Among the presenters is Lauren Greenfield, an award-winning photographer and filmmaker and preeminent chronicler of the intersections of American youth culture, consumerism, gender and affluence. Her films include “The Queen of Versailles” and “Generation Wealth,” the latter to be screened over the weekend. And a number of Greenfield’s compelling images from her latest doc of the rich at play will be on display at the Telluride Gallery of Fine Art.

Meet the artist on October 4 during Art Walk or on Saturday, October 6, noon – 1 p.m. 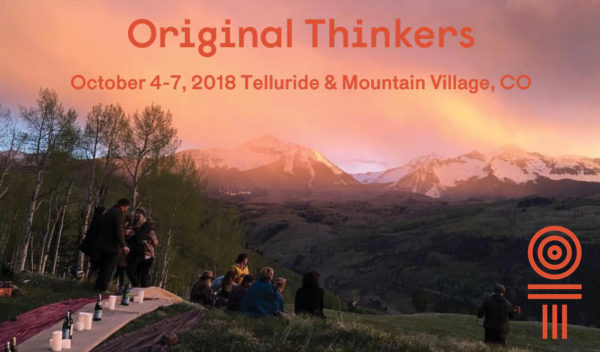 They party like it’s the 1920s, these people rich in money, largely poor in sense. Old money, new money, royalty, nobility, rich bitch, describe them as you like, the people depicted in Lauren Greenfield’s latest documentary, book and photographic images, the culmination of 25+ years chronicling America’s excess, is “a cautionary tale about what happens when greed, status and money cloud the vision of what’s most important in life,” explains Original Thinkers.

These people in general do not conform to the trope “idle rich.” They are too loaded to sit around and actually do nothing (usually). Instead their free time is taken up by traveling, going to parties and galas, attending horse races and polo matches, keeping up with the latest society gossip, figuring out what to wear and how to stay beautiful. They may even do some token work, perhaps for the family enterprise.

They are the people who benefit most from Trump’s tax bill. 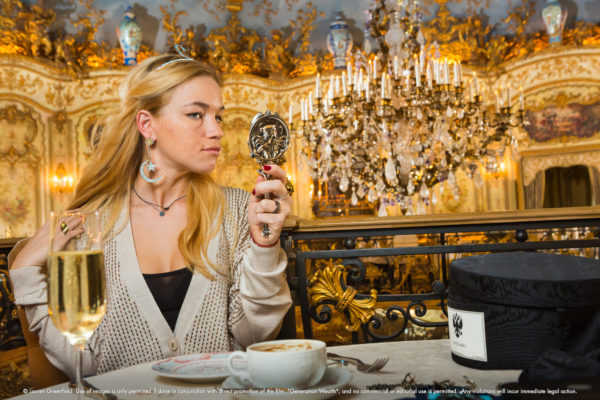 Admiring a jeweled tiara at the Turandot restaurant in Moscow in 2012. Credit:Lauren Greenfield.

And, as we said, they are the subjects of Lauren Greenfield’s work of decades observing and capturing fat cats and their progeny. Is this expert on plutocracy also predicting our cultural future as a nation? Are we a diseased society hurtling towards the abyss?

Ask yourself that question as you check out “Generation Wealth” at the Telluride Gallery. The stills from the film examine obsessions with wealth, status, youth, and beauty. The story spans the entirety of Greenfield’s career and is at once a morality tale, an economics lesson – and, surprisingly, an autobiography. Greenfield has gone on record as being amazed about how much the current administration is foreshadowed in her work. No doubt her latest project, film and photographs, suffused with lush color, exposes the dark underbelly of extreme privilege.

Fame, materialism, real estate, reality TV, the commodification of women’s bodies are the artist’s leitmotifs. Among Greenfield’s actual subjects: a young beauty queen who “would have money as big as this room;” the Gorden Gekko-esque businessman Florian Homm, now living in Germany after being charged with investment fraud in the US; David and Jackie Siegel, who starred in Greenfield’s previous feature, “The Queen of Versailles” about the couple’s attempt to build the largest private home in the US;  a Las Vegas casino hostess; a Botox-obsessed hedge-fund investor determined to have a baby; a high-priced etiquette teacher for Chinese women; and the debutante daughters of Russian oligarchs. Some of them suffer the fallout of their lavish lifestyles and outsized obsessions, underlining the idea of a cautionary tale for today’s culture. 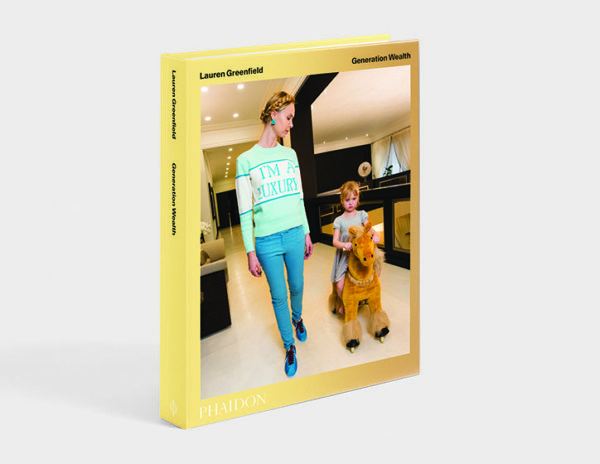 Prompted by that year’s economic crash, Greenfield has been working on different iterations of the “Generation Wealth” project since 2008. It became a \book from Phaidon Press, also titled “Generation Wealth,” published in May 2017. An exhibition of the same name, organized by the Annenberg Space for Photography, has traveled to venues including New York’s International Center of Photography – and now Telluride.

Lauren Greenfield was born in Boston, grew up in Los Angeles, and graduated from Harvard University with a B.A. in visual and environmental studies in 1987. She worked as a photojournalist based in Los Angeles and London, and published work in National Geographic, Time, Newsweek, The New York Times Magazine, the London Sunday Times Magazine, Fortune, Vanity Fair, LIFE, and other magazines. Early projects included the photographic series “Survivors of the French Revolution.” (Talk about the idle rich.) 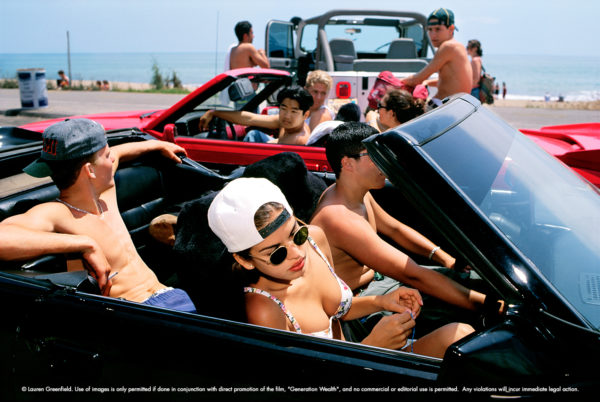 For more about Lauren Greenfield and her work, check out this article in The New York Times,

Perhaps because she has spent her career watching the rich, the photographer and filmmaker Lauren Greenfield is herself rich to watch. At a party after the New York premiere of her new documentary — “Generation Wealth,” about the perils of capitalism — Ms. Greenfield was wired, welcoming and constantly working. She snapped pictures of the well-heeled crowd as she hugged her way around the room, occasionally misplacing a glass of white wine, in a churn of compliments and gossip.

Ms. Greenfield, 52, paused to note that one prominent guest had left the festivities early: Jacqueline Siegel, the star of her best-known documentary, “The Queen of Versailles,” about the construction of a $100 million house amid last decade’s financial crisis. Ms. Greenfield observed that in the intervening years, Ms. Siegel’s bosom seemed to have grown inexplicably, much like the national economy. “It’s a metaphor,” Ms. Greenfield said, “for the excess of the new American dream.” (Through a spokesman, Ms. Siegel, a self-professed patron of cosmetic procedures, denied that she has recently augmented her breasts.)

Over the last 30 years, Ms. Greenfield has become America’s foremost visual chronicler of the plutocracy, and those who hope to join its ranks. Her ultra-saturated, up-close, unsparing images have appeared in the pages of The New York Times Magazine, GQ and The New Yorker, as well as museum exhibitions and theatrical documentaries. Ms. Greenfield’s lens has fallen on affluent teens playing hooky, rappers and the strippers they shower $100 bills on, investors in exile, hedge-funders in denial, Iceland’s teetering banking system, abandoned mansions in Dubai and countless other icons of the world’s mounting financial inequality.

In an interview in July, Ms. Greenfield noted that critics have occasionally dismissed her work as marginal. And yet her fascination with materialism has often placed her ahead of the cultural curve. In 1992, she photographed bored teenagers at a fancy Los Angeles school dance; two of them were the then-unknown Kim and Kourtney Kardashian. In 2007, Ms. Greenfield began work that eventually led to “The Queen of Versailles,” putting her in an ideal position to document the global housing crash.

Arriving in theaters nationwide on Aug. 3, “Generation Wealth” is a 105-minute collage of a documentary that weaves together still images, news clips, original interviews and footage of Ms. Greenfield’s own family. It argues that the unceasing pursuit of fame and fortune has “become the new American dream” (it’s a favorite phrase), replacing the Horatio Alger allegory of pulling oneself up by the bootstraps.

Ms. Greenfield is well aware that she didn’t invent this notion. In a gold-hued, 503-page monograph also titled “Generation Wealth” that Phaidon published in 2017, Ms. Greenfield quotes the writer Fran Lebowitz: “Oh please, Americans do not hate the rich; they want to be them. Every American believes that they are the impending rich, and that will never change.”

Ms. Greenfield began work on the documentary in 2014 after performing “an archaeological dig into my own work” — re-examining more than 500,000 images and 650 hours of audio/video footage archived at her Venice, Calif., home. She and her husband-slash-co-producer, Frank Evers, pitched the project to Amazon Studios…