A.R. Gurney’s “Final Follies” is up at the Cherry Lane Theatre through October 21, 2018. Make it a date by treating yourself to dinner at Fifty at 50 Commerce Street. The place is billed as “New American” food with focus on Latin spices. Squeaky clean, simply elegant setting. (Friends of TIO should ask for “Joseph.”) 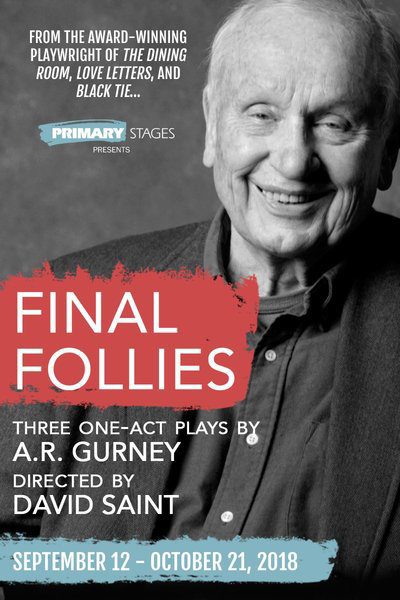 Once upon a time – or was it yesterday? – just after The Daily Planet opened for business in 1993, the Sheridan Opera House hosted a production of A.R. Gurney’s “Love Letters,” a tender, tragic-comic and nuanced examination of the shared nostalgia, missed opportunities and deep closeness of two lifelong, complicated, uber WASPy friends (penned in 1988). The production spans five decades in the lives of the two protagonists and takes place in numerous locations, but it is staged very very simply with the actors behind desks or seated in cozy chairs, letting words alone shared in letters describe a world of  change and emotion.

Back then it became “A Thing” to pair celebrated actors in the roles of Andrew Makepeace III and Melissa Gardner. In Telluride, the show was staged twice, first with Carol Burnett and Brian Dennehy, my first interviews ever, then with Sissy Spacek and Mel Gibson. (The latter was on the board of the Sheridan Arts Foundation at the time).

“Sylvia” is Gurney’s modern romantic comedy about a marriage and a dog whose close relationship with The Man puts the marriage in jeopardy. That comedy, written in 1995, was also staged at the Opera House. At one point off-Broadway the role of the stray was played by Sarah Jessica Parker. In Telluride, Stephanie Cozart did the honors. We wound up introducing Stephanie to long-time Telluride local Frances Hill Barlow, who went on to cast her often in her Urban Stages Productions in New York. (Big doings there now, so check out the website.)

I am rambling a bit. The point is having reviewed two of his plays, we were very familiar with A.R. Gurney, arguably the foremost chronicler of WASP culture . We knew the playwright had a deft hand when the subject was challenging one’s roots in that world and/or sexual repression. So when we heard about “Final Follies,” we jumped on tickets to the farcical triptych.

• “The Rape of Bunny Stuntz,” tells the somewhat enigmatic story of an overburdened, Stepford-like suburban wife who tries to keep her somewhat suspect personal life under wraps while leading a rowdy community meeting.

• “The Love Course” marks the culmination of an undergraduate course in romantic literature, co-taught by two of academia’s most eccentric professors who live vicariously through tales of adultery.

Directed by David Saint, the lean, clean production is terrific, as is the ensemble cast, a mix of Broadway veterans and up-and-comers.

“Final Follies” is mostly theatrical fluff, more show than tell. However, one moment in “Rape” looks back over its shoulders at today’s headlines: Bunny is going to prove her innocence by showing us all her “engagement calendar.” It’s Gurney on the whining of WASP culture more than the waning – although the two are often conflated in our world. (See today’s headlines and many members of Congress.) But sometimes fluff is enough – especially if it is this much fun. We, along with the rest of the audience, laughed out loud. Often.