Tickets for the Ah Haa School’s New Year’s Eve Gala in Telluride include an improvisational duet between painter Chris Miller and author/storyteller Craig Childs, plus a banquet prepared by Josh Klein (of Smuggler‘s and Sidework), a full bar and a selection of  fine wines. For more information and to reserve your tickets or table, contact Kathleen Cole at 970-728-3886 or e-mail: kathleen@ahhaa.org. 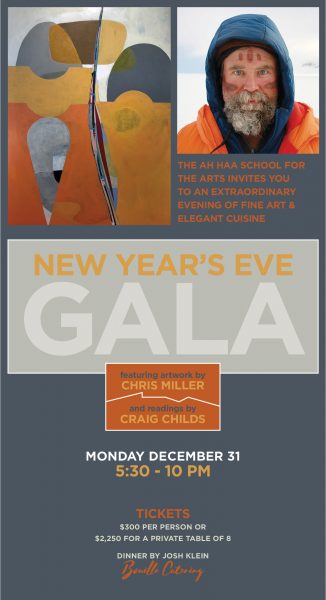 Synesthesia: a condition in which the brain links a person’s senses together, prompting unusual sensory responses to stimuli. In this case, shapes, lines and colors conflate with language to create short story moments, resulting in a whole that is greater than the sum of its parts.

Because one man uses paint to communicate.

The other works with words.

On this very special night at this very special event, painter Chris Miller and author Craig Childs pair up to perform a kind of jazzy duet, its roots planted firmly in that all-American genre built, paradoxically, on both independence and cooperation, with improvisation at its core. Think of their proposed interplay as a variation on the theme of a parlor game with high stakes: the support of one of Telluride’s signature institutions whose mission is to enhance lives through art (writ large) everyday.

Altogether it should be a big bright roman candle of an evening, lots of fun and ideas flaring in all directions to ring in the New Year in high style.

Chris Miller has been painting continuously since college, both landscapes and abstractions, but the work on display at Ah Haa is all non-objective.

“Landscape studies allow you to interpret the world you see and recast it in your unique view; abstraction brings unseen and unknown elements together to create a dialog between form, color and texture with the idea of exploring the essential in our own unique experience. Painting is a journey, and I’m not sure where that’s going to take me, but there’s an exploration going on which is both personal and autobiographical.”

Like all abstractions, Miller’s newest work, stripped of the duty to depict something accurately or judge an external reality, winds up revealing universal truths like the emotional meaning of color and shapes on their own. And that goes straight to the heart of Childs’ improvisational riffs.

As a teaser for what’s in store on New Year’s Eve, check out Childs’ response to Miller’s at once delicate, yet explosive abstraction, which, like all his work (above), is Untitled. (So as not to prejudice the viewer’s response.)

“As a desert traveler, I see this painting and can’t help thinking of water I’ve found in so much barrenness. It is Yin and Yang everywhere. The image takes me to the Atacama Desert in South America, encountering isolated pools in the driest non-polar landscape in the world. At the same time, I see bone and the spongy, interstitial spaces within called osteons, landscapes stripped down and brought to life with water and agonizingly clear, blue skies.”

Why show up and support Ah Haa and art in general?

Because there is no place more transporting and ultimately comforting to think about the inevitability of life’s forward motion than a gallery filled with fine art. Art captures time and motion, making it easy to contemplate the complexity of both. In the process of reflecting, the noise in your head just might disappear. (Though the street noise in town might be deafening.)

Why else support Ah Haa?

Because tuition alone in no way supports the life-changing classes Ah Haa has offered for almost three decades. (Over the past five years alone, Ah Haa’s programming has grown over 55% and youth programming has doubled!)

What’s more, once its new home on the corner of Fir and Pacific is complete, Ah Haa would like to diversify and expand that programming to meet the needs of an ever-changing community.

For example,  over the years the Telluride region has shown a growing interest in the culinary arts, but to date the school has been forced to use kitchens in private homes to accommodate cooking classes. The new facility will contain a teaching kitchen, ideal for small cooking classes for both youth and adults.

With a larger ceramics studio, Ah Haa can increase the number of classes and participants in that burgeoning program.

Further, with a new, designated gallery space that does not double as a classroom, visitors will be able to view and purchase works of art anytime. Ah Haa will be able to maintain the integrity of each exhibit through the duration of the show, without disassembling or hiding artwork to accommodate students.

On New Year’s Eve, raise a glass to Telluride’s arts education center and more “ah haa” moments in your life.

Chris Miller was born in California and studied studio art in various colleges, including Fort Lewis College and CU. Near the end of a short career in film he discovered Telluride and moved here with his family in 1992. Since 2013, Miller has divided his time between San Francisco, Napa Valley and Telluride. An avid cyclist, he and his wife Catherine McNamee owned Moots Cycles from 1995 to 2015.

Over the years Miller has studied painting at Ah Haa and Anderson Ranch, however, this is his first solo exhibition.

Craig Childs is an Arizona native now living in western Colorado. Winner of the 2009 Rowell Art of Adventure Award, he is part deep traveler, part writer who focuses on natural sciences, archaeology, and journeys into the global wilderness. He is also a commentator for National Public Radio’s Morning Edition and his work has appeared in The New York Times, Los Angeles Times, Men’s Journal, Outside, the Sun, and Orion. His subjects range from pre-Columbian archaeology to US border issues to the last free-flowing rivers of Tibet and Patagonia.

Childs is known for following ancient migration routes on foot, pursuing early Pueblo passages across the Southwest and most recently the paths of first peoples into the Americas during the Ice Age. He has published more than a dozen books of adventure, wilderness, and science. His newest work, ATLAS OF A LOST WORLD: TRAVELS IN ICE AGE AMERICA, examines the dynamics of people moving into an uninhabited hemisphere in the late Pleistocene, documenting arrivals from Alaska to Florida to southern Chile. For more on that book, go here.

Childs has won the Orion Book Award, also the Sigurd F. Olson Nature Writing Award, the Galen Rowell Art of Adventure Award, and the Spirit of the West Award for his body of work.

“Childs’s feats of asceticism are nothing if not awe inspiring: he’s a modern-day desert father,” raved The New York Times.

Craig Childs holds a B.A. in Journalism from CU Boulder with a minor in Women’s Studies, and an M.A. from Prescott College in Desert Studies.

When he is not on a walkabout, Childs teaches writing at University of Alaska in Anchorage and the Mountainview MFA at Southern New Hampshire University.