On Monday, February 18, starting at 6 p.m. for apps and bar, tenor Dennis McNeil performs at Telluride’s St. Patrick’s Church. The concert begins at 7 p.m. Tickets are $35 and available at St. Pat’s, Ace Hardware, online at brownpapertickets.com  and at the door. Or call 970-728-3387.

Please scroll down for a sample or two of Dennis McNeil in action. 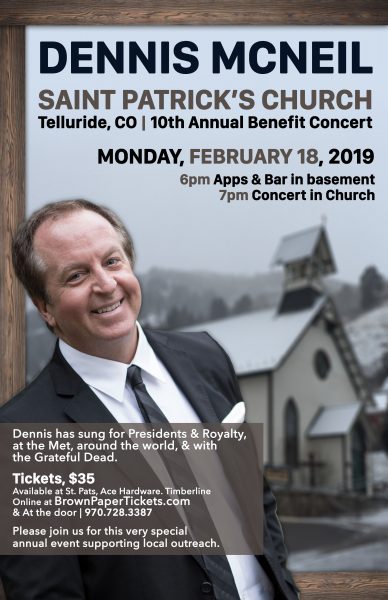 His sublime tenor has enchanted Presidents  and royals. He has performed in a wide variety of concert venues, including stadiums, around the world in a style reminiscent of the best of the best: Bing Crosby, Perry Como, and Andy Williams.

“Tenor Dennis McNeil brought down the house with his potent rendering of ‘Carousel’s’ poignant ‘Soliloquy.’ An aria by any other name, this piece offers a singer the rare opportunity to express a range of emotions, all of which McNeil used to his advantage. Good acting, superb diction, expressiveness and a well-trained tenor voice (that recalls the work of a young Robert Goulet) contributed mightily to McNeil’s successes with everything he sang, from ‘Younger than Springtime’to ‘Oh What a Beautiful Morning.'”(Symphony Pops)– Sacramento Bee.

And the man is, duh, Irish, which means McNeil serves up a healthy sides of the blarney along with the tunes. His stories are funny, a few deliciously off-color, but always engagingly on point.

Dennis McNeil is coming to Telluride for his annual visit. On Monday, February 18, he performs at St. Patrick’s Church, a regular gig, this year accompanied by Kenny Goldman. We attended his concert last year. No blarney: it was a night to remember and not to be missed this time around.

“Dennis McNeil’s show at St Patrick’s Church is one of the loveliest evenings in Telluride,” said Kate Wadley.“We are fortunate he loves our town so much and enjoys performing every year for a small intimate group at our church.” 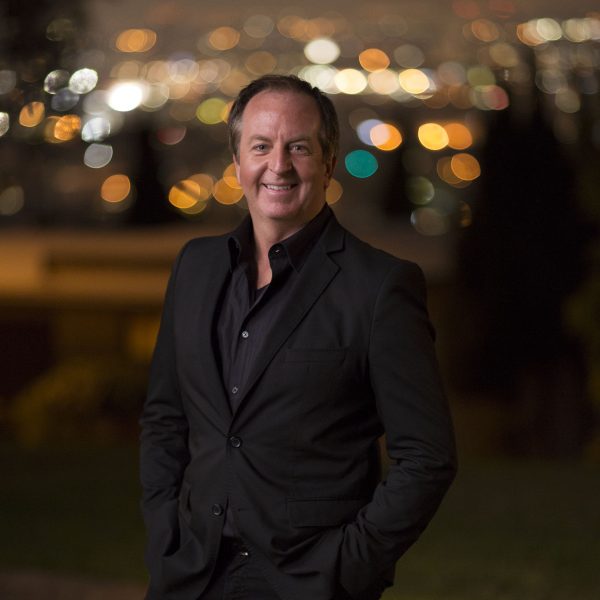 Multi-award winning entertainer, Dennis McNeil is a highly sought after singer and concert artist known for his golden voice, versatility and Irish charm and wit.

Having sung in every state in the U.S. and around the world, McNeil has headlined in three national tours with both the San Francisco Opera and the New York City Opera companies. He has also toured and performed internationally with famed composer and jazz legend, Lalo Schifrin. McNeil also performed nationally with famed lyricist Sammy Cahn.

McNeil has sung nationally in many musical theater productions, has been featured in many television broadcasts and on a number of recordings.

Dennis McNeil just returned from a personal performance at the US Supreme Court where he entertained Justices Roberts, Breyer, and Kennedy, including a personal song for Henry and Nancy Kissinger.

He also recently performed on Thanksgiving Day at St. Paul’s Cathedral in London at the invitation of the US Ambassador to Great Britain.

McNeil was proclaimed 2014 “Irishman of the Year” by the Los Angeles City Council and was voted “2011 AND 2012 Best Male Cabaret Artist” by Broadway World.

McNeil has received top honors from such varied groups as the Met and the Grateful Dead. He was a National Winner of the Metropolitan Opera National Council Auditions and as a leading tenor at the New York City Opera, was awarded the Richard F. Gold Career Award for his portrayal as Mark in their New York Stage Premiere of Michael Tippet’s “A Midsummer Marriage.”

In addition to performing with former Secretary of State, Condoleezza Rice, McNeil has personally entertained nine Supreme Court Justices, six Secretaries of State, former President of Mexico, Vicente Fox, and many other dignitaries around the world. He has sung at Lincoln Center, the Kennedy Center, the U.S. Supreme Court, and was a featured performer at the Kennedy Space Center Memorial Service for lost Space Shuttle, Columbia. He was also a featured headline performer at the 2001 Presidential Inauguration.

McNeil has entertained corporations such as AT&T, Kemper Insurance, New York Life Insurance, NASA, Northwestern Life, Pacific Life and Hearst Corporation. He sang the National Anthem for the Los Angeles Dodgers, Lakers, Clippers, Kings and the San Francisco Giants among many other teams and events, earning him the title “Star Spangled Tenor.”

As a recording artist, McNeil recently released his 8th CD, About Time.