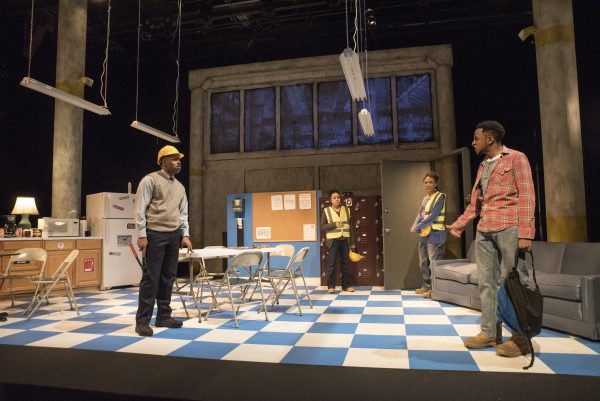 Left to right, Cajardo Lindsey as Reggie, Kristina Fontaine as Shanita, Perri Gaffney as Faye, and Quinn Marchman as Dez.

Dominique Morrisseau’s thoughtful play “Skeleton Crew” treats us to the interconnected working lives of four hard-hat employees at a stamping plant in Detroit. The year is 2008. The economy is crashing.

The play takes place in the break room. There’s a bulletin board for increasingly authoritarian management directives. There are lockers to hide secrets, a coffee pot with a sad-looking brew, a sagging couch, beat-up tables for lunch, and a clock for employees to punch in. The floor is checked blue-and-white, the forecast is “worries ahead.”

In short, it’s another knock-out Curious Theatre Company set (by Charles Dean Packard). We may not be able to see the assembly line, but that’s channeled via sharp overhead animated projections (sound and projection design by El Armstrong) between scenes. Rust and repetition; faceless human beings at work.

On stage, there are workers on the brink. Faye, Dez, and Shanita. They can feel what’s coming. There are rumors. Reggie, the foreman, is in the same boat. Reggie might have a higher pay grade. He might appear to be the one giving orders, cracking down on the rules (or at least trying), but his footing is equally tenuous. Increasingly, Reggie is taking a stab at enforcing the company rules and trying, but not that hard, to figure out who is behind a rash of recent thefts. 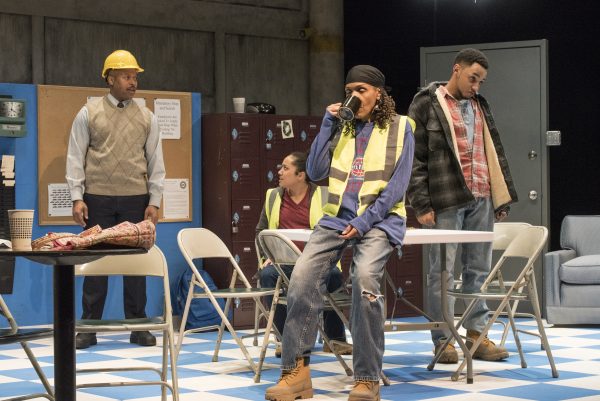 Left to right, Cajardo Lindsey as Reggie, Kristina Fontaine as Shanita, Perri Gaffney as Faye, and Quinn Marchman as Dez.

Faye is the old-hand. She is jaded. Unflappable. She is closing in on 30 years, a threshold that could dramatically change her retirement income—if she can reach that milestone. Dez is feisty and brash, a bit jumpy. He is clearly interested in Shanita, who is well along in a pregnancy, and irks her with a series of suggestive cracks. Desperately hoping to keep her job for the sake of the child on the way, Shanita wants stability for herself and for the future.

“Skeleton Crew” is a thematic companion to Morrisseau’s “Detroit ’67,” which was given a stellar production last year by the Curious Theatre Company. (The third play in her “Detroit Trilogy” is “Paradise Blue.”) Clearly, Morrisseau is keen on real people in tough spots. As she did in “Detroit ’67,” Morrisseau keeps the focus on those being impacted—the major forces behind the “Skeleton Crew” are all off stage.

Morrisseau leads with dignity—and she deals out the critical secrets that drive “Skeleton Crew” with judicious care. “Skeleton Crew,” is built and paced for the slow burn, not the cheap theatrical gimmick (though there are a few genuine jolts along the way).

Directed by donnie l. betts, the four actors in the Curious production slip into their roles with ease. Perri Gaffney is particularly understated and cool as the been-there, done-that Faye. Gaffney is knock-out in this role. And Cajardo Lindsey, who turns up frequently at Curious, including as Lank in “Detroit ’67,” shows us Reggie’s efforts to straddle his loyalties to those in the break room (he came up through the ranks) and to upper management, too. He is tough, angry and frail all at once. Quinn Marchman plays Dez with a jazzy flair—smooth fast-talker at times, brooding and petulant at others. And Kristina Fontaine gives Shanita a rich presence. When she finally decides to respond positively to Dez’s overtures, we are squarely in her corner all the way, wanting her to have whatever she desires.

As we watch this foursome make choices about how they are dealing with real life out there and as we realize how forces beyond their control are impacting how they behave in the workplace, too, we leave the Curious Theatre wondering if we can’t do better by all of them, if we are creating a workplace world that adds to our dignity and encourages hope. (Spoiler alert: we are probably not). 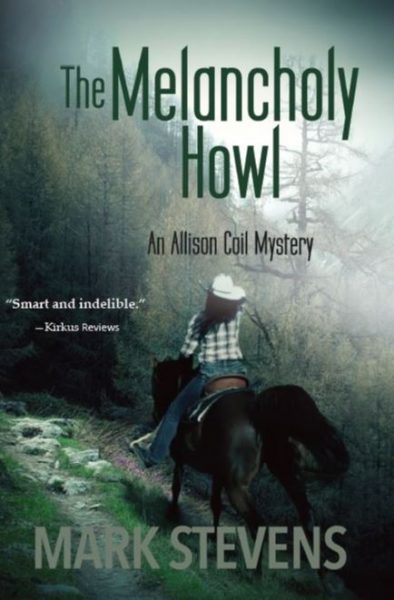