Pico Iyer is also a regular guest at Mountainfilm. We were privileged to interview him in 2018. Listen to his podcast here. 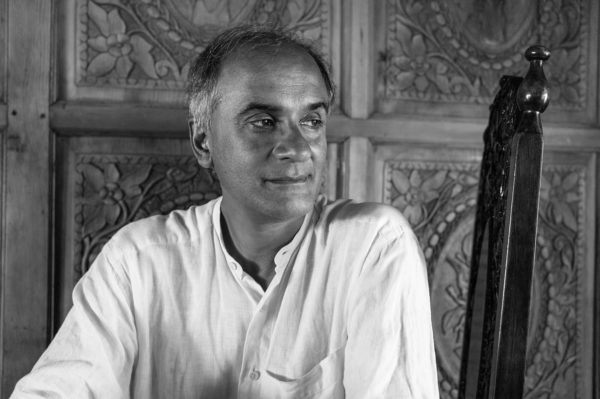 Festival organizers annually select one of the world’s great film enthusiasts to join them in the creation of the Festival’s program lineup. The Guest Director serves as a key collaborator in the Festival’s programming decisions, bringing new ideas and overlooked films to Telluride. In keeping with Telluride Film Festival tradition, Pico Iyer’s film selections, along with the rest of the Telluride lineup, will be kept secret until Opening Day.

“Pico is a tremendously gifted writer with unrivaled wit,” said TFF Executive Director Julie Huntsinger. “His enthusiasm for film, especially within his writing, has buoyed and enchanted us. It has made working with him to create this year’s Guest Director program a particularly delightful experience. Both Tom Luddy and I are thrilled to have Pico with us this year.”

Pico Iyer is the author of two novels and 13 works of non-fiction. His books have been translated into 23 languages and both his 2008 meditation on the XIVth Dalai Lama, “The Open Road,” and his TED Book, “The Art of Stillness,” were best-sellers across the U.S. He is also a Guggenheim Fellow, a Pulitzer Prize nominee, and a finalist for the Los Angeles Times’ Book Prize.

An essayist for Time since 1986, Iyer is also a regular contributor to The New York Times, The New York Review of Books, Harper’s and more than 200 other newspapers and magazines worldwide. He has published introductions to 70 other works.

Iyer has also written liner-notes for Leonard Cohen, essays for several Criterion Collection DVDs, and a screenplay for Miramax. His writing on Malick, Farhadi, Bertolucci, Scorsese, and many other filmmakers has appeared all over, and his observations on movie studios from North Korea to Hyderabad have borne out The New Yorker’s assertion that “As a guide to far-flung places, he can hardly be surpassed.”

Born in Oxford, England, in 1957, Iyer was educated at Eton, Oxford, and Harvard. This year he’s been serving as Ferris Professor of Journalism at Princeton.

“In the times I’ve been to the Festival I’ve seen as many rich and original films in three days as I get to watch in the next twelve months combined,” said Iyer. “So when Tom and Julie asked if I might be willing to serve as Guest Director this year, I felt as stunned and delighted as if I’d been given the keys to the kingdom. Movies have actually been my secret passion for as long as the Telluride Film Festival has been around. But nobody had intuited this until Tom and Julie, a dream team of sorts, sensed my excitement and offered me a chance to share my enthusiasms and passions with others. The invitation to help choose films for the Festival this year was the most exciting one I can remember receiving; I only hope I can pass on a fraction of the delight that I have found at Telluride to others in this inspiring community.”

The Guest Director program is sponsored by Turner Classic Movies (TCM). Considered throughout the industry as one of the leading authorities on classic film, the network presents great films, uncut and commercial-free, highlighting the entire spectrum of film history.

The prestigious Telluride Film Festival ranks among the world’s best film festivals and is an annual gathering for film industry insiders, cinema enthusiasts, filmmakers and critics. TFF is considered a major launching ground for the fall season’s most talked-about films. Founded in 1974, Telluride Film Festival, presented in the beautiful mountain town of Telluride, Colorado, is a four-day international educational event celebrating the art of film. Telluride Film Festival’s long-standing commitment is to join filmmakers and film connoisseurs together to experience great cinema. The exciting schedule, kept secret until just before Opening Day, consists of over three dozen filmmakers presenting their newest works, special Guest Director programs, major Tributes to guest artists, special events and remarkable treasures from the past. Telluride Film Festival is a 501 (c)(3) non-profit educational program. Festival headquarters are in Berkeley, CA.

Turner Classic Movies (TCM) is a two-time Peabody Award-winning network that presents great films, uncut and commercial-free, highlighting the entire spectrum of film history. TCM features the insights from Primetime host Ben Mankiewicz along with hosts Alicia Malone, Dave Karger and Eddie Muller, plus interviews with a wide range of special guests and serves as the ultimate movie lover destination. Currently in its 25th year as a leading authority in classic film, TCM offers critically acclaimed series like The Essentials, along with annual programming events like 31 Days of Oscar® in February and Summer Under the Stars in August. TCM also directly connects with movie fans through events as the annual TCM Classic Film Festival in Hollywood, the TCM Big Screen Classics series in partnership with Fathom Events, as well as through the TCM Classic Film Tour in New York City and Los Angeles. In addition, TCM produces a wide range of media about classic film, including books and DVDs, and hosts a wealth of material online at tcm.com and through the Watch TCM mobile app.