My dear dad taught his girls love and respect could not, should not, be turned on and off like a light switch according to a date on a calendar – like Father’s Day. That said, David Feela‘s tribute to his father, the man’s surrogate today, simple cotton pajamas, reminds us how we love them, regardless of  their quirks. Or in this case, because of them. So before you buy one more tie or razor –  or another pair of pjs – no dad really needs, perhaps consider the gift of David’s words. Or Rosemerry Trommer’s poem. These gifted writers express sentiments that will never wear out – or get forgotten in the bottom of a draw. 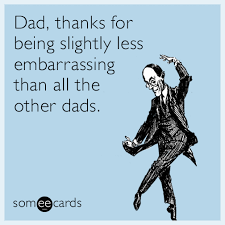 My father might have been known as
the Commandant of Cotton
or the Curator of Sleep
had anyone inventoried his bedroom.

After he died we found layered
in the bottom dresser drawer
like strata, pajamas folded away
for nearly a half century.

Most were threadbare, thin enough
to be mistaken for gauze or lingerie.
At bedtime he opened his drawer,
and lifted the top pair from its tiny coffin

where he’d kept them confined.
By morning he’d slip out of his soft skin,
strap on the same rigid work shirt and pants
he’d left hanging in the corner every night.

But here he held in reserve 35 pairs
of tenderness he’d never shown
to anyone else, 35 pairs he saved
for that glance in the mirror

or maybe for that moment in bed
when he pulled the sheets to his chin
and felt the reassurance of habit
that never wears out. 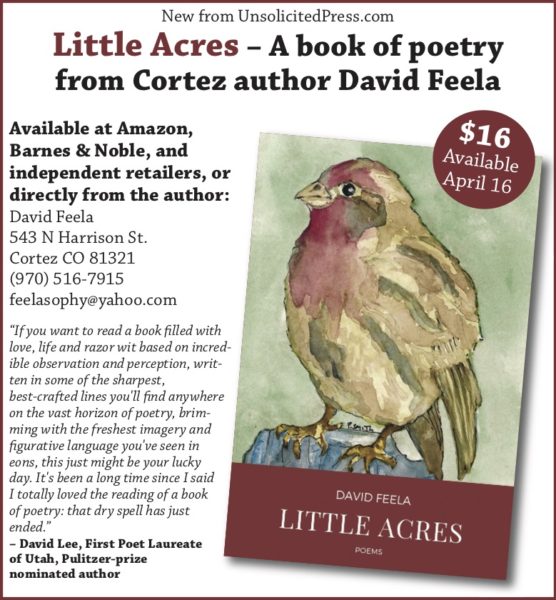 David Feela is a poet, free-lance writer, writing instructor, and book collector. His work has appeared in regional and national publications, including the High Country News‘ “Writers on the Range,” Mountain Gazette, Small Farmer’s Journal, Utne Reader, and in the newspaper as a “Colorado Voice” for The Denver Post.

For 11 years, Feela served as a contributing editor and columnist for the former Inside/Outside Southwest and currently writes monthly columns for The Four Corners Free Press and The Durango Telegraph. A poetry chapbook, “Thought Experiments” (Maverick Press), won the Southwest Poet Series.

Feela’s first full length poetry book, “The Home Atlas,” appeared in 2009. His collection of essays, “How Delicate These Arches: Footnotes from the Four Corners,” was selected as a finalist for the Colorado Book Award in the category of Creative Nonfiction.

David Feela, recently retired from a 27-year teaching gig, was a “Colorado Voice” for the Denver Post. He worked for over a decade as a contributing editor and columnist at Inside/Outside Southwest magazine and now contributes occasional pieces to High Country News’s “Writers on the Range”, as well as a monthly piece for the Four Corners Free Press and the Durango Telegraph. David’s first full-length book of poetry, The Home Atlas, was released in 2009 through WordTech. A book of his essays, How Delicate These Arches: Footnotes From the Four Corners (Raven’s Eye Press) is now available.